Boris Johnson will not attend the Duke of Edinburgh’s funeral to allow for the attendance of as many family members as possible during coronavirus restrictions, No 10 has said.

The Prime Minister was understood to have been expected to attend the ceremony but offered to step aside with the number of guests allowed limited to 30.

The Duke’s funeral will take place in Windsor Castle on April 17, but it will be unlike typical royal send-offs, with the public being told to stay away because of the pandemic.

The country will hold a minute’s silence when the Duke of Edinburgh is carried to his funeral next week, on a specially-modified Land Rover he helped design.

A No 10 spokesman said: ‘As a result of the Coronavirus regulations, only 30 people can attend the funeral of HRH The Prince Philip, Duke of Edinburgh.

‘The Prime Minister has throughout wanted to act in accordance with what is best for the royal household, and so to allow for as many family members as possible will not be attending the funeral on Saturday’. Boris Johnson will not attend the Duke of Edinburgh’s funeral to allow for the attendance of as many family members as possible during coronavirus restrictions, No 10 has said. Pictured: Mr Johnson with the Queen and Prince Philip in 2012 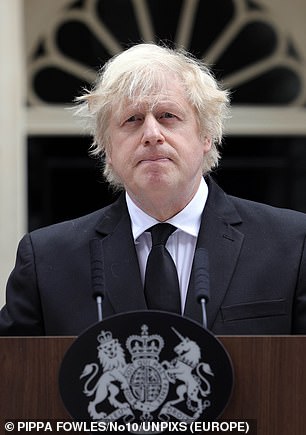 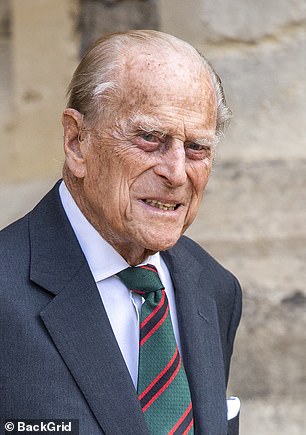 The Prime Minister was understood to have been expected to attend the ceremony for Philip by the royals, but offered to step aside with the number of guests allowed limited to 30

Buckingham Palace today announced that Prince Philip’s ceremonial royal funeral will take place on April 17 in St George’s Chapel, Windsor Castle, and a national minute’s silence will be observed as it begins at 3pm.

Prince Harry will travel to the UK to be with his family for the service, but his wife Meghan will remain at their home in California, having been ‘advised not to travel’ by her doctor, the Palace confirmed tonight.

The duke’s coffin, accompanied by the Dean of Windsor and the Lord Chamberlain, will be moved to the State Entrance of Windsor Castle by a Bearer Party of The Queen’s Company, 1st Battalion Grenadier Guards.

The coffin will emerge and the Bearer Party will place it onto a specially modified Land Rover, which Philip helped to design, to transport it to St George’s Chapel.

The procession from the state entrance to the West Steps of the chapel will take eight minutes.

The Prince of Wales and members of the royal family will take part in the procession on foot, immediately behind the duke’s coffin, together with staff from Philip’s household.

The route of the procession will be lined by representatives drawn from the Royal Navy, the Royal Marines, the Highlanders, 4th Battalion Royal Regiment of Scotland and the Royal Air Force.

Minute guns will be fired by the King’s Troop Royal Horse Artillery from the east lawn of Windsor Castle for the duration of the procession, and the Curfew Tower Bell will toll.

A Guard of Honour and Band from The Rifles will receive the coffin at the foot of the West Steps, with the national anthem being played as the coffin enters Horseshoe Cloister.

A bearing party of Royal Marines will carry the coffin up the steps and pause for the minute’s silence.

Following the minute’s silence, the Dean of Windsor, together with the Archbishop of Canterbury, will receive the coffin at the top of the West Steps.

In keeping with coronavirus guidelines to limit guests inside the chapel, most of the procession will not enter the chapel, except for members of the royal family, and the duke’s private secretary Archie Miller Bakewell.

The funeral service will begin as the coffin enters St George’s Chapel.

Official royal mourning will then take place for two weeks after the funeral.

Only 30 people – expected to be the Duke’s children, grandchildren and other close family – will attend as guests, but the Duchess of Sussex has been ‘advised by her physician not to travel to the UK’ for the funeral.

The announcement came as Prince Charles paid a poignant tribute to his father, describing his ‘dear Papa’ as a ‘very special person’ and ‘the most remarkable, devoted’ companion to the Queen in an emotional video released this evening.

In a moving address, speaking without notes, the Prince of Wales said his father would have been ‘deeply touched’ by the sorrow felt by millions of people in Britain and across the world at news of his passing.

He said he would miss his father ‘enormously’ and added that his family were ‘deeply grateful’ for the condolences offered, which he said would ‘sustain us’ at this ‘particularly sad time’.

The Earl and the Countess of Wessex spent around an hour with the Queen at the castle on Saturday, with a tearful Sophie telling reporters as she left: ‘The Queen has been amazing.’

The Duke of Edinburgh’s coffin will be transported in a ceremonial procession to his funeral on a Land Rover he helped to design.

It is a fitting tribute to Philip, who was known for his practical skills and his enduring interest in design and engineering.

The purpose-built Land Rover was specially modified to carry a coffin in a project that the Duke helped with many years ago.

The vehicle will process slowly through the grounds of Windsor Castle ahead of the duke’s funeral on Saturday at St George’s Chapel.

A bearer party from the Grenadier Guards will place the coffin on the Land Rover at the state entrance of the castle, before the vehicle begins the eight-minute journey at walking pace to the west steps of the chapel.

It will be flanked by pall bearers reflecting the duke’s special relationships with the military – the Royal Marines, Regiments, Corps and Air Stations.

Immediately behind the Land Rover, the Prince of Wales and other members of the royal family, likely to be the duke’s other children and some of his grandchildren, will proceed on foot.

The Land Rover’s poignant role in the funeral proceedings always formed part of Operation Forth Bridge – the codename given to the plans following Philip’s death.

A senior Palace official said: ‘The Duke of Edinburgh had a hand many years ago in the design of these vehicles.’ The official added that there were two Land Rovers for ‘belt and braces’.

The Queen has approved the Prime Minister’s recommendation of national mourning, which began on April 9 and runs until and including the day of the funeral.

It is understood Meghan made every effort to be able to travel with Harry, who will be among the mourners, but has not received the medical clearance to board a plane.

Originally 800 people would have been due to gather to pay their respects to the nation’s longest serving consort, but Philip is known to have wanted a low key affair.

Prime Minister Boris Johnson will not attend the Duke of Edinburgh’s funeral to allow for the attendance of as many family members as possible during coronavirus restrictions, No 10 said tonight. 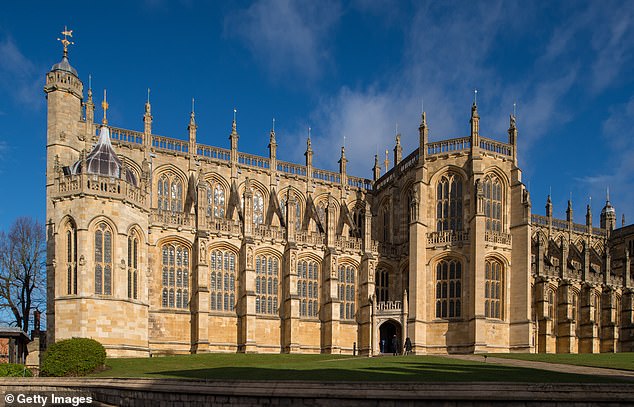 St George’s Chapel at Windsor Castle is the resting place of 10 monarchs. Steeped in history, the 15th century gothic church, set in the Lower Ward of the Queen’s favourite residence, has seen many royal funerals and weddings 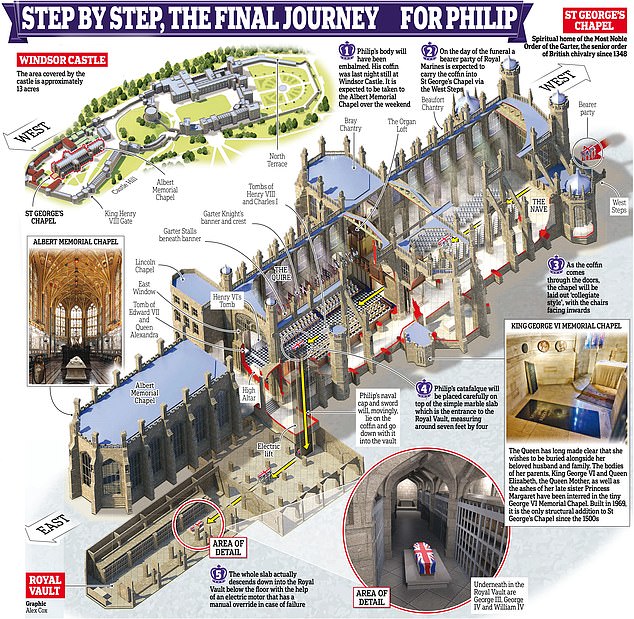 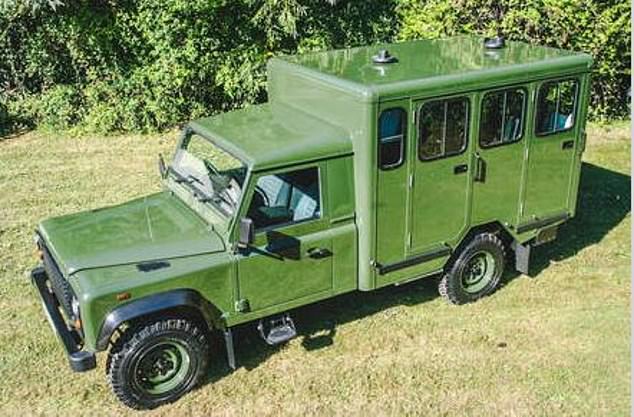 The Duke’s Defender 130 Gun Bus: This Defender Gun Bus, built from a Td5 130, was commissioned by the Duke of Edinburgh in 2005. After a 45-minute meeting at Sandringham with the Duke this design was created, Land Rover said. It is understood this will be the vehicle that carries his coffin 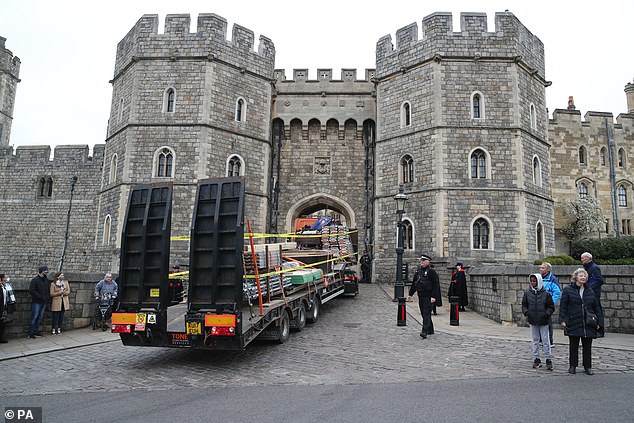 A lorry carrying scaffolding and stage building equipment arrives at the Henry VIII gate at Windsor Castle, Berkshire, on Saturday afternoon as preparations are made for Philip’s funeral

The first guest confirmed by the palace was the duke’s private secretary, Archie Miller Bakewell, who has held the post for 11 years.

All public elements of the funeral have been cancelled, it will be televised but take place entirely in the grounds of the castle, the Palace said.

The Queen has decided the royal family will enter two weeks of royal mourning, and engagements will continue appropriate to the circumstances, a senior royal official said.

Public elements of Operation Forth Bridge – the codename for the duke’s funeral plans – were abandoned for fear of drawing crowds including the long held arrangements for military processions through London and Windsor.

Instead, the proceedings will take place entirely in the grounds of Windsor Castle, televised, but away from public view and with no access for royal fans.

The duke died peacefully in his sleep at Windsor Castle on Friday, two months before his 100th birthday, leaving the Queen and the royal family ‘mourning his loss’.

The Duke of York arrived at Windsor on Saturday, while the Prince of Wales visited his mother there on Friday.

Gun salutes have been fired across the UK, in Gibraltar and at sea in tribute to the duke.