A paving firm boss has sparked outrage after he posted a job vacancy stating that ‘no homeless veterans’ need to apply for a £300-per-week role.

The advertisement was posted on social media by north Wales-based company Quayside Paving and Landscape Services.

The Facebook post, which has now been removed by the user, sparked a fierce backlash and was widely shared online.

‘No alcoholics, gamblers, drug users or homeless veterans please.’ A later post on their Facebook page said: ‘We recently put a ad up for labourer jobs/apprenticeship. 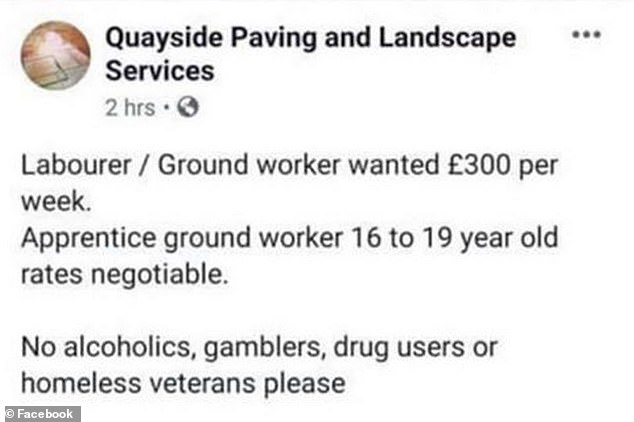 ‘We listed no drug users, alcoholics or homeless veterans.

‘I’ve had bad experience with all listed and although I’m happy to give anyone an opportunity for a bit of cash I shouldn’t have posted it as not all drug users, alcoholics or homeless veterans should be tarred with the same brush.

‘This is a mistake on my behalf and I shouldn’t have posted it. Sorry if it’s caused any offence.’

Despite the apology, many Facebook users were furious, and the apology post attracted more than 360 comments in four hours with some describing the ad as ‘shameful’ and ‘ignorant’.

One said: ‘I’ve seen your original post shared in many, many groups – I think the damage is already done. For a business that was an awful advert you put out.’

This is while another added that he had been a homeless veteran and had become dependent on alcohol.

‘I suffered massively with PTSD caused from being blown up by a roadside bomb on Iraq.

‘I’m a hard worker and I’m now self employed as a dog handler and I earn more now than I’ve ever done in my life.

‘I can still drink alcohol but chose not to as I really don’t enjoy it anymore. I crack on and really enjoy the work I do.’

He continued to say that most veterans have a very strong work ethic and and ‘loyal, trust worthy’ and have a massive sense of pride’.

‘Sadly you seem to have had one bad experience and have categorised all of us with that one experience.

‘Your shameful post is an example of pure ignorance. You’ve really done yourself no favours posting what you did.

‘How about you take a break from your business and immerse yourself into some research of how and why people turn to drink/drugs and how people end up homeless.

‘Maybe even study the psychological effects of war and maybe you won’t be so blinded in your perfect bubble.’

‘Don’t ever judge those less fortunate than yourself, especially those that signed on the dotted line to give everything to their country up to and including their life for somebody like you.’

And another said: ‘I was always taught never look down on someone unless you’re helping them up.

‘Maybe you should adopt that attitude, and maybe next time you see an RBL (Royal British Legion) collection tin or Help for Heroes volunteer collecting money, you may want to donate and reflect on this episode and learn a valuable lesson from it.’

Quayside Paving and Landscape Services has been asked to comment.