The single-malt scotch was produced in 1926 by revered distillery The Macallan in Moray in Scotland.

It spent the next 60 years maturing in an ex-sherry cask before being bottled in limited number in 1986.

It is said to be the finest cask of whisky ever matured. 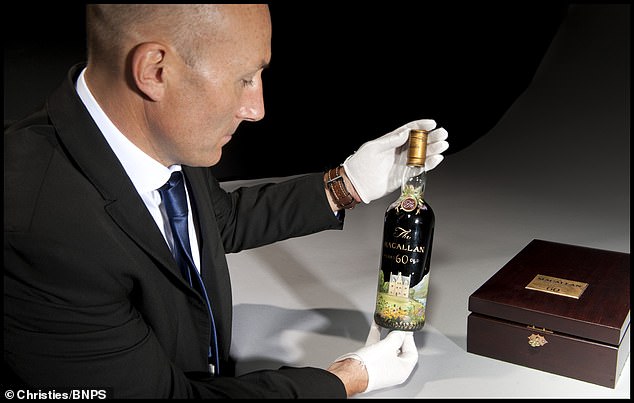 The 60 year old Macallan whisky, in a unique bottle hand-painted by Irish artist Michael Dillon and held here by Tim Triptree (pictured), Christie’s International Director of Wine, has sold at auction for a world record price of £1.2m

Peter Blake, the renowned artist behind the album cover for the Beatles’ Sgt. Pepper’s Lonely Hearts Club Band, and Italian painter Valerio Adami were asked to design a label for 12 bottles each.

One bottle with the Adami label sold earlier this year for a then-world-record price if £848,000.

But what is less well known is that Irish artist Michael Dillon commissioned and hand-painted a one-off bottle.

The unique ‘Holy Grail’ bottle sold at London’s Fortnum and Mason in 1999 for an unknown price.

Irish mural painter Michael Dillon hand-painted just one bottle of the scotch, which contains whisky from a cask of 60-year-old single-malt considered to be the finest ever matured

It emerged for sale at auctioneers Christies in London where it sold for a hammer price of £1m.

With fees added on, the total price paid by the anonymous overseas buyer was £1.2m.

The staggering price equates to a single shot of the exclusive tipple now worth £48,000.

The bottle has never been opened but the whisky is said to have an amber and mahogany colour and developed a concentrated and complex aroma.

Tim Triptree, international director of wine at Christie’s, said he ‘would like to believe’ the new owner will actually enjoy the Scotch. 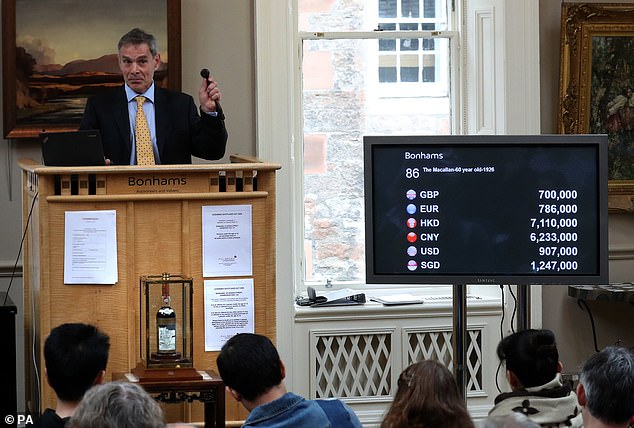 In October a bottle of the same scotch sold for £848,750 at the Bonham’s Whisky Sale at their Edinburgh auction house – but the bottle which just sold at Christie’s has added almost £400,000 to that world record.

He said: ‘The Macallan is undoubtedly the leading distiller of all single malt whisky and is streets ahead of any other distillery.

‘And this bottle is the Holy Grail for whisky collectors.

‘Some 40 bottles were produced from this cask but this record-breaking bottle was completely unique.

‘The auction market for single malt whisky is red hot at the moment.

‘There is huge demand and limited supply, unlike a vintage wine, of which there would be a few thousand bottles made.

‘I would like to think the new owner will drink it.

‘We are delighted with the world record price it achieved, it is an amazing result.’

The Macallan distillery, located near the River Spey in north east Scotland, was founded in 1824

The unique hand-painted label for the record-breaking bottle depicts the Easter Elchies House of The Macallan against the backdrop of the Scottish Highlands.