Brexit uncertainty is set to slow the economy down into the new year, the Bank of England warned today.

Growth forecasts for the final part of 2018 have been downgraded from 0.3 per cent to 0.2 per cent. The sluggish growth is set to continue into 2019.

The Bank warned that uncertainties have ‘intensified’ as exit day nears on March 29.

The bleak forecasts came as the Bank’s Monetary Policy Committee, chaired by Governor Mark Carney, voted to hold interest rates at 0.75 per cent. 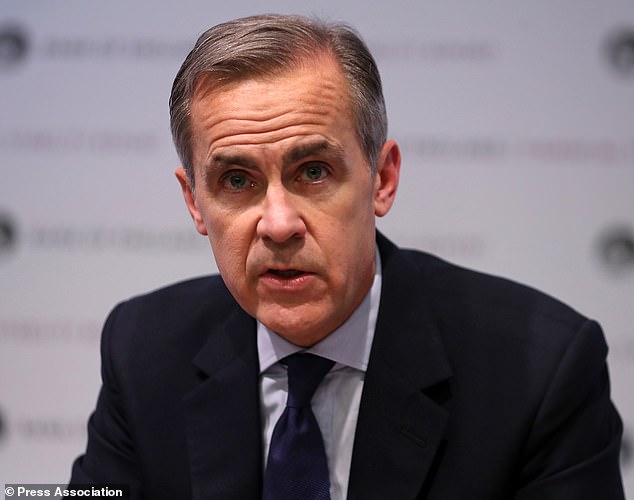 The bleak forecasts came as the Bank’s Monetary Policy Committee, chaired by Governor Mark Carney, voted to hold interest rates at 0.75 per cent

In minutes of the MPC meeting, the Bank said: ‘The further intensification of Brexit uncertainties, coupled with the slowing global economy, has also weighed on the near-term outlook for UK growth.

‘Business investment has fallen for each of the past three quarters and is likely to remain weak in the near term.

‘The housing market has remained subdued. Indicators of household consumption have generally been more resilient, although retail spending may be slowing.’

The Bank added: ‘The monetary policy response to Brexit, whatever form it takes, will not be automatic and could be in either direction.

‘The MPC judges at this month’s meeting that the current stance of monetary policy is appropriate. The committee will always act to achieve the 2 per cent inflation target.’

The Bank said that the loosening of fiscal policy previously announced in the Government’s Budget ‘would boost GDP by around 0.3 per cent over the MPC’s forecast period.’

This in turn is expected to boost inflation slightly during the second half.

The Bank expects inflation to fall below its 2 per cent target in January to around 1.75 per cent and ‘remain under target over the subsequent few months.’ The 12-month Consumer Prices Index inflation fell 2.3 per cent in November. 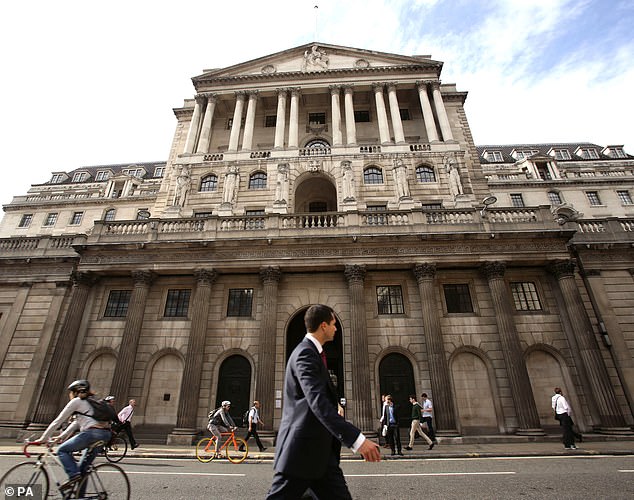 Brexit uncertainty is set to slow the economy down into the new year, the Bank of England warned today

Just weeks ago, the Bank warned in its Brexit scenario analysis that Britain could be tipped into a recession worse than the financial crisis in the event of a no-deal disorderly Brexit.

Mr Carney has insisted that rates could go up or down after a cliff-edge Brexit, with the Bank’s analysis warning they might be hiked to 5.5 per cent if a further fall in the pound sends inflation soaring.

Tom Stevenson, investment director for Personal Investing at Fidelity International, said: ‘No surprises from the Bank of England today. With Brexit as far from resolution as ever, Mark Carney has rightly put monetary tightening on hold in the UK. There will be plenty of time to normalise interest rates after next March.

‘The Monetary Policy Committee voted unanimously for no change in base rate today. This is unsurprising in light of the gloomy tone of the comments that accompanied the decision. In particular, the Bank highlighted the intensification of Brexit uncertainties since the committee’s last meeting and the impact of these on financial markets.

‘The outlook for global growth has also softened and the downside risks increased, the Bank said.

‘It would be surprising if interest rates rose by more than one quarter point increase in 2019 and the rate of tightening will most likely remain slow and steady throughout 2020 too.

‘In light of this, investors are likely to be attracted to the income on offer from blue-chip shares, with the FTSE 100 index now yielding nearly 5% and many leading companies offering even higher yields than this.’

The latest economic indicators show the toll Brexit is already taking, with gross domestic product easing sharply to 0.4% in the three months to October, against 0.6 per cent in the third quarter.