“I think the text messages truly do speak for themselves,” Darren Heitner, the founder of Heitner Legal, said on Yahoo Finance Live (video above). “I do wonder if this case will ever get past motion to dismiss and enter the discovery phase where potentially Bill Belichick would be deposed. I think what it shows … is that the Rooney Rule has really become a type of ‘check the box’ platform.”

In the 58-page document, Flores provides screenshots of a text message exchange allegedly between himself and New England Patriots Head Coach Bill Belichick. 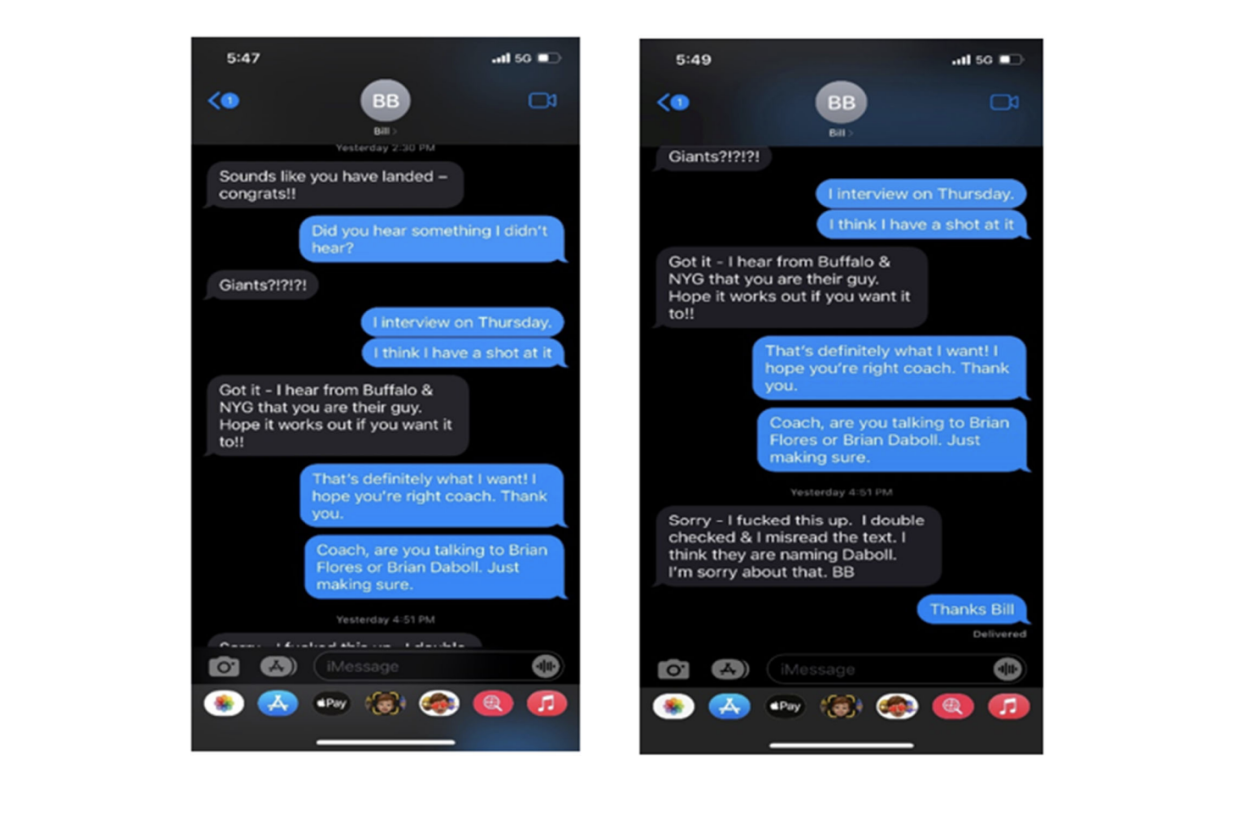 The messages suggest that Belichick knew the Giants had decided on another candidate — Brian Daboll — prior to interviewing Flores. Flores alleges that text messages show how the Giants were only complying with an NFL mandate known as the Rooney Rule, which requires at least two head coach interviews with diverse candidates, by interviewing him.

“What sticks out the most is that there’s obviously a problem,” Heitner said. “The problem is that the Rooney Rule was put into place years ago to try to ameliorate the issue of not enough minority coaches being put in place. As we sit here today, only one Black head coach is coaching in the NFL.”

Flores filed the class-action lawsuit against the NFL and three teams — the Giants, the Dolphins, and the Denver Broncos — alleging racism in his firing from the Miami Dolphins and the league’s hiring practices. 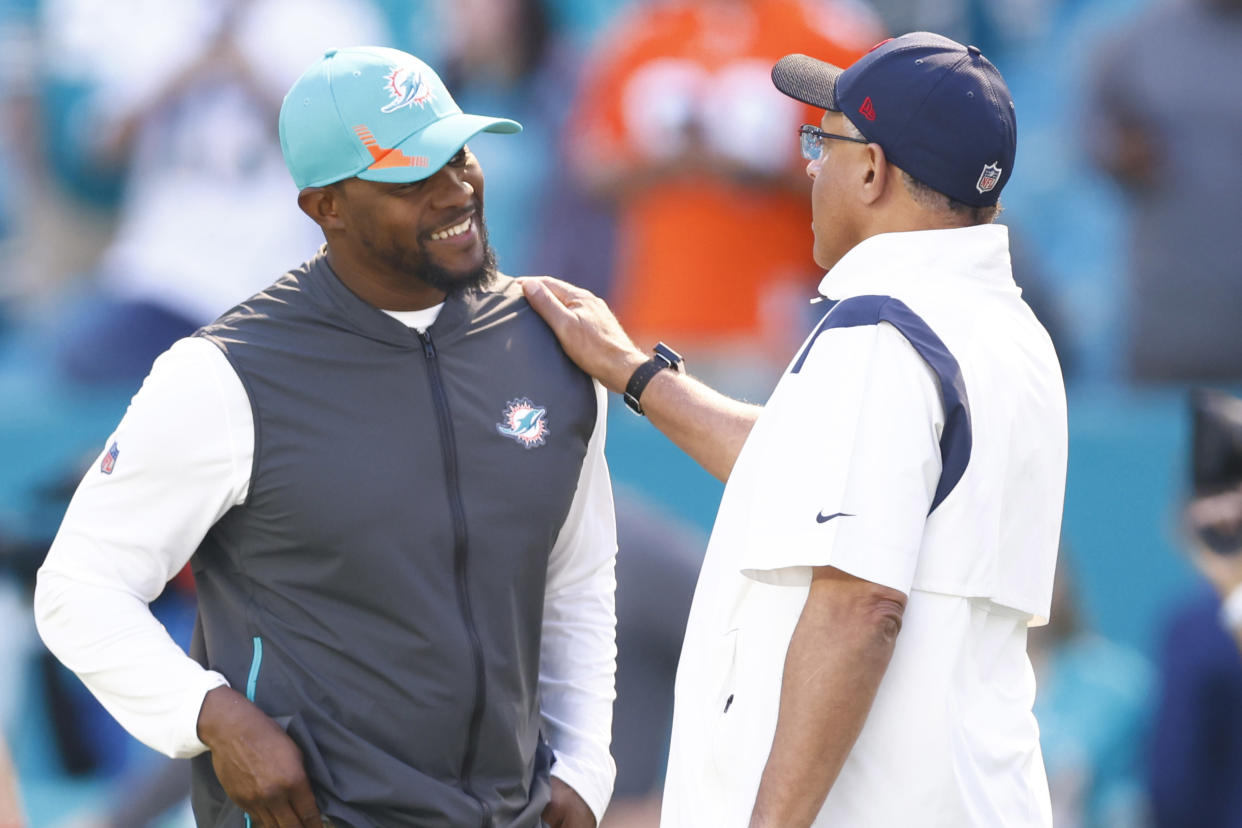 “The allegation that the Giants’ decision had been made prior to Friday evening, January 28, is false," the Giants said in a statement. "And to base that allegation on a text exchange with Bill Belichick in which he ultimately states that he 'thinks' Brian Daboll would get the job is irresponsible. The text exchange occurred the day before Coach Daboll’s in-person interview even took place."

Flores also alleged that his experience is not unique and is part of the larger diversity and representation issue in America’s largest professional sports league. Just one of the NFL’s 32 teams currently has a Black head coach while the league’s player pool is about 70% Black, according to statistics cited in the Flores lawsuit.

"The NFL and our clubs are deeply committed to ensuring equitable employment practices and continue to make progress in providing equitable opportunities throughout our organizations," the NFL said in a statement released Tuesday. "Diversity is core to everything we do, and there are few issues on which our clubs and our internal leadership team spend more time. We will defend against these claims, which are without merit."

‘Going to be a very tough burden’

Flores had coached three seasons for the Dolphins, leading the franchise to consecutive winnings seasons for the first time since 2003 before the franchise fired him on January 10. The 40-year old coach started interviewing with teams later that month, when the alleged bias from the Giants in the hiring practice took place.

While Heitner believes Flores could have a case against the Giants, he’s not as confident in Flores’ evidence against the other teams accused. Flores is alleging that executives at the Dolphins gave up on the coach early in his tenure after he refused to lose games for a better draft pick and convince a “prominent quarterback” to sign with the Dolphins prior to free agency.

Both instances with the Dolphins are part of a league issue surrounding tanking and tampering and are being investigated by the NFL, per multiple reports, and might not be seen as “racial,” per Heitner.

The case against the Broncos centers around a 2019 job interview when Flores claims team executives arrived an hour late to the meeting and appeared disheveled. The lawsuit alleges it was “obvious they had been drinking heavily the night before.”

“It’s going to be a very tough burden for them to prove either the Dolphins or the Broncos committed some sort of racial backlash based on the fact he didn’t end up getting the job with the Broncos and then was ultimately terminated by the Dolphins,” Heitner said. 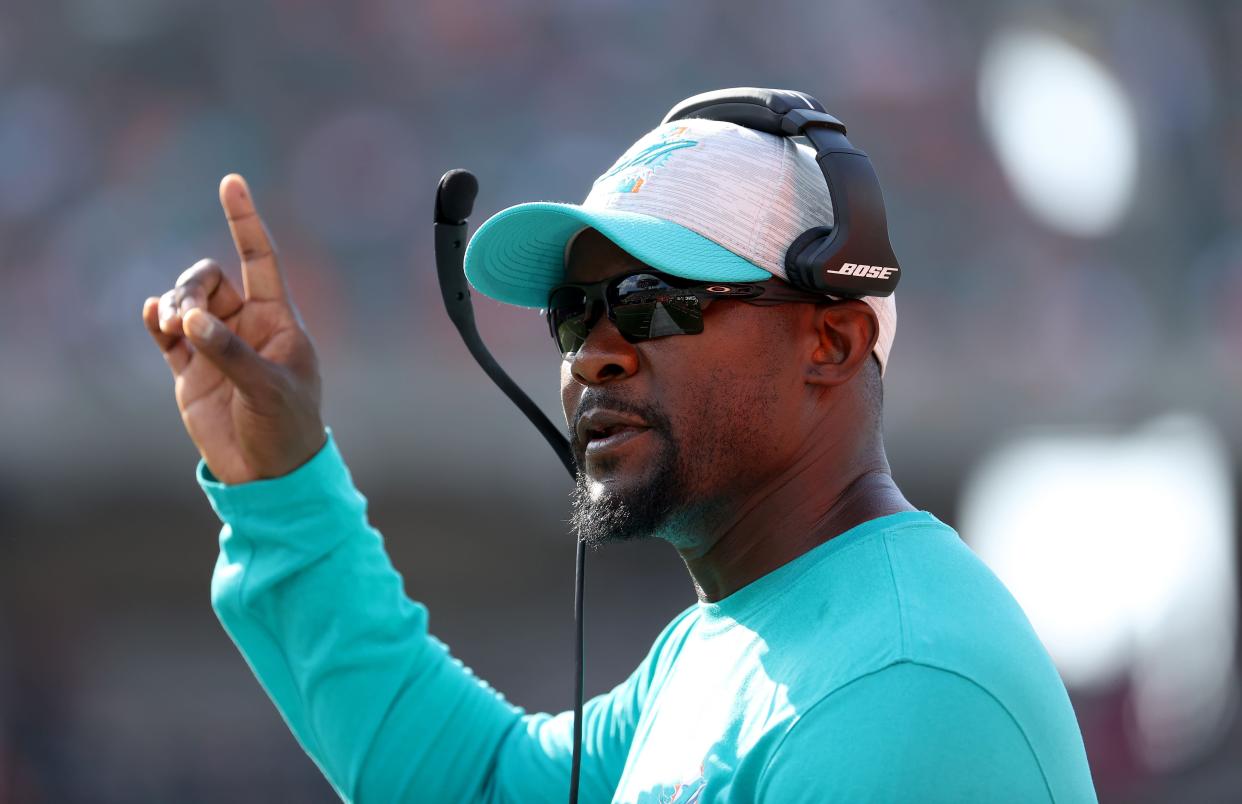 Yahoo Sports reported that former Cleveland Browns coach Hue Jackson may join Flores’ class action suit, but Heitner posited that the case isn’t likely to be certified as a class action lawsuit because Flores’ experiences are too personally specific.

Patrick Rishe, sports business director at Washington University in St. Louis’ sports business program director, agreed but noted that the lawsuit’s impact on how race issues in the NFL are viewed by the broader public could be the most significant outcome from the lawsuit.

“There's no question that the high profile nature of this Brian Flores lawsuit is going to be an eye opener,” Rishe said. “Not just within the NFL, not just within professional sports, but across all of human resource decision making in America. There are going to be companies and leaders that need to recognize and be aware of this.”

Josh is a producer for Yahoo Finance.