Department of Health chiefs have yet to confirm the final daily figure, which is often much higher because it takes into account lab-confirmed fatalities in all settings.

The early count — which only includes a fraction of the Covid-19 deaths in England — is calculated by adding up updates declared by each of the home nations.

NHS England today posted 10 deaths in hospitals across the country. No fatalities were recorded in any setting in Scotland, Wales or Northern Ireland.

Just 14 deaths were recorded across Britain yesterday — but tallies declared on Sundays and Mondays are always lower because of a recording delay at weekends. 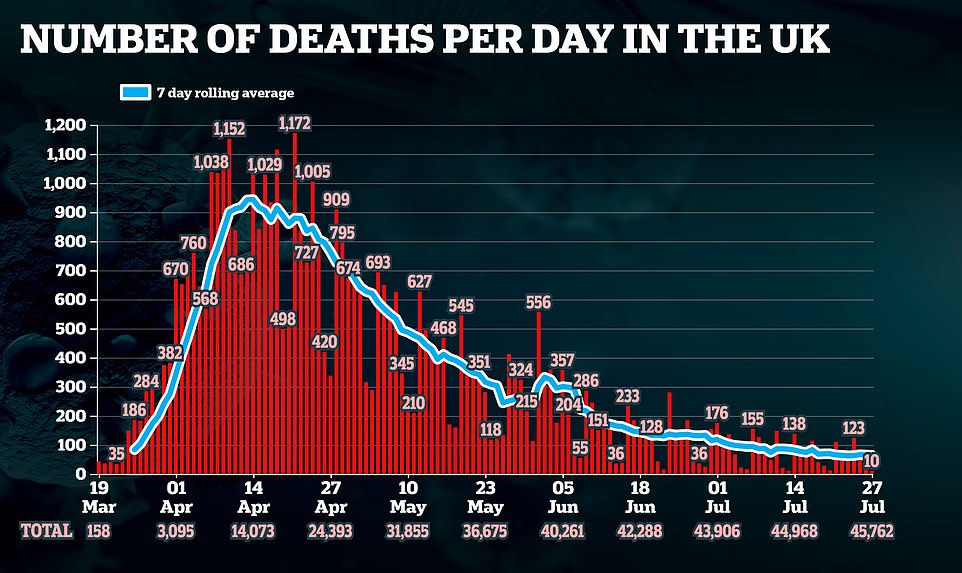 The coronavirus pandemic is ‘easily the most severe’ emergency that the WHO has ever declared, the agency said today as global cases surged past 16million.

The global tally has risen by a million in just four days, led by massive outbreaks in the United States, India and Brazil which are each piling up tens of thousands of new cases per day.

South Africa is also seeing more than 10,000 new cases a day while places such as Spain, Belgium and Hong Kong are facing second waves of the disease.

WHO chief Tedros Adhanom Ghebreyesus said the number of cases had doubled in just six weeks as he warned today that ‘the pandemic continues to accelerate’.

However, while cases have been surging at record levels, global deaths have remained stagnant at around 30,000 to 40,000 per week.

Department of Health figures released yesterday showed 140,000 tests were carried out or posted the day before. The number includes antibody tests for frontline NHS and care workers.

But bosses again refused to say how many people were tested, meaning the exact number of Brits who have been swabbed for the SARS-CoV-2 virus has been a mystery for a month — since May 22.

But the actual size of the outbreak, which began to spiral out of control in March, is estimated to be in the millions, based on antibody testing data.

It means the rolling average of daily cases dropped to 663 — 7 per cent higher than the 621 average cases figure recorded last Sunday.

The daily death data does not represent how many Covid-19 patients died within the last 24 hours — it is only how many fatalities have been reported and registered with the authorities.

The data does not always match updates provided by the home nations. Department of Health officials work off a different time cut-off, meaning daily updates from Scotland as well as Northern Ireland are always out of sync.

And the count announced by NHS England every afternoon — which only takes into account deaths in hospitals — does not match up with the DH figures because they work off a different recording system.

For instance, some deaths announced by NHS England bosses will have already been counted by the Department of Health, which records fatalities ‘as soon as they are available’.

More than 1,000 infected Brits died each day during the darkest days of the crisis in mid-April but the number of victims had been dropping by around 20 to 30 per cent week-on-week since the start of May.

Sixty-four Britons are dying with Covid-19 each day, on average. By contrast, the rate last Sunday was 69 and has barely changed in the past seven days.