UK Prime Minister Boris Johnson has called for a new ‘Trump deal’ on the same day European signatories to the Iran nuclear treaty declared they were triggering the agreement’s dispute mechanism, paving the way for fresh sanctions on Tehran.

‘We have therefore been left with no choice, given Iran’s actions, but to register today our concerns that Iran is not meeting its commitments under the JCPOA (Iran deal) and to refer this matter to the Joint Commission under the Dispute Resolution Mechanism, as set out in paragraph 36 of the JCPOA,’ the UK, France and Germany, said today in a joint statement.

In one of the strongest calls yet from Europe for a new agreement to replace the 2015 deal that Washington abandoned two years ago, British Prime Minister Boris Johnson said the way forward was to agree a new ‘Trump deal’. 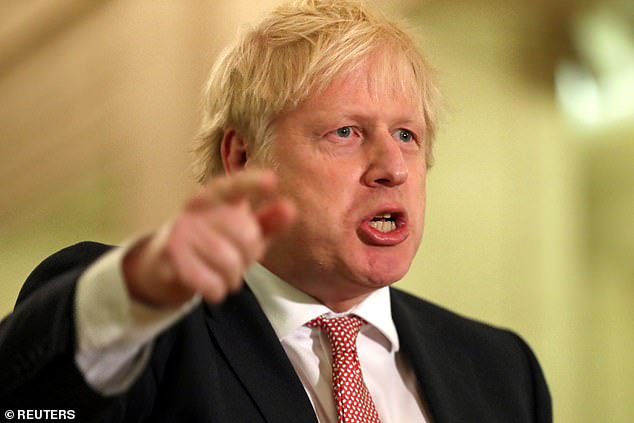 Prime Minister Boris Johnson speaks in Belfast yesterday. Johnson today called the current JCPOA ‘flawed’ and as having ‘many fault’, from an American perspective 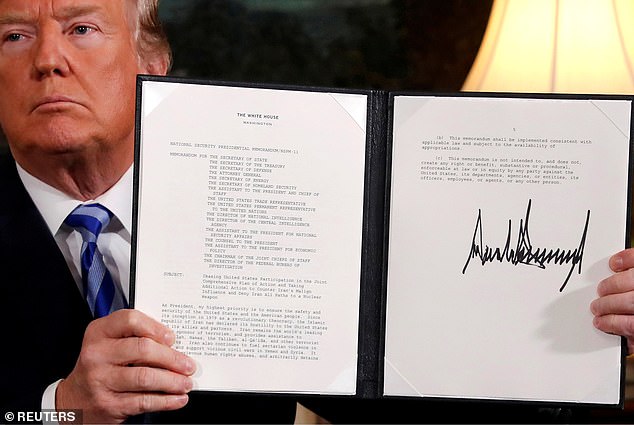 U.S. President Donald Trump holds up a proclamation declaring his intention to withdraw from the JCPOA Iran nuclear agreement after signing it in the Diplomatic Room at the White House in Washington, US May 8, 2018

‘If we are going to get rid of it then we need a replacement,’ Johnson said of the 2015 nuclear deal that he and other European powers have been trying to salvage after Washington pulled out.

‘That’s what we need to see. I think that would be a great way forward.’

‘From the American perspective it’s a flawed agreement, it expires, plus it was negotiated by (former) President Obama,’ Johnson said.

‘From their point of view it has many, many faults.’

He added: ‘President Trump is a great deal-maker – by his own account and many others. Let’s work together to replace the JCPOA and get the Trump deal instead.’

But the three powers said they ‘once again express our commitment’ to the deal and would not join ‘a campaign to implement maximum pressure against Iran’ championed by US President Donald Trump who walked out of the accord in 2018.

The mechanism will forward the Europeans’ dispute to a Joint Commission of Iran, China, Russia, the three European powers who have called it, and the European Union.

If that joint commission is unable to resolve the dispute, it is again forwarded to the United Nations Security Council.

If the UNSC were to decide, all previous sanctions could be ‘snapped back’ on Iran, which would ultimately cripple the country. 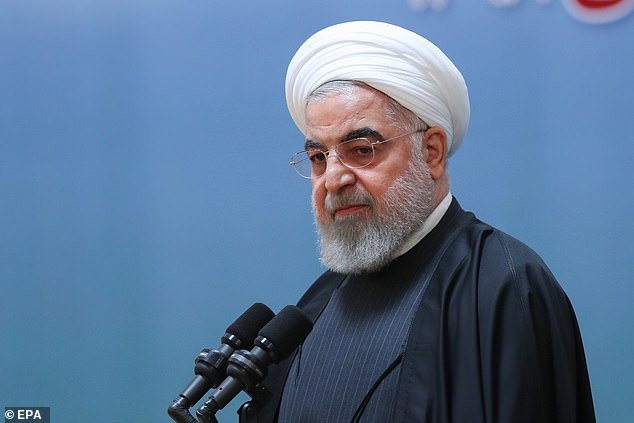 Britain, France and Germany have been trying to save the Joint Comprehensive Plan of Action (JCPOA), which curbed Iran’s nuclear programme in return for sanctions relief.

But President Donald Trump pulled out the United States in 2018, and Tehran has subsequently wound down its compliance.

‘We want to see Iran come back to full compliance and we will be looking at all measures including potentially triggering the DRM (dispute resolution mechanism),’ he said. 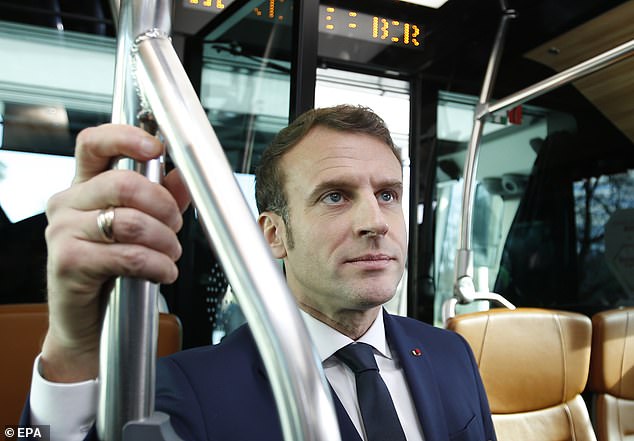 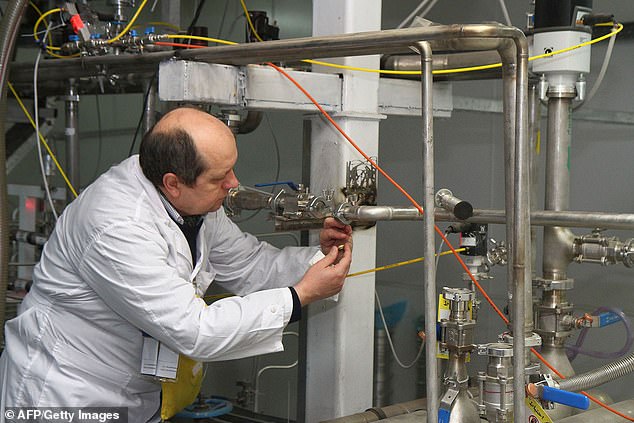 In this file photo taken on January 20, 2014, an unidentified International Atomic Energy Agency (IAEA) inspector disconnects the connections between the twin cascades for 20 per cent uranium production at nuclear power plant of Natanz, some 185 miles south of Tehran

In November, French Foreign Minister Jean-Yves Le Drian warned of triggering the mechanism but Iranian Foreign Ministry Spokesman Abbas Mousavi came back with a retort, claiming that European powers are limited in when they trigger the mechanism.

‘Under the current circumstances, JCPOA does not allow Europe to resort to this mechanism in response to Iran exercising its legitimate right to respond to the United States’ illegal and unilateral measures and the European parties’ fundamental breach of their obligations,’ Mousavi said.

Yesterday, Trump told Iran the ball is in their court as the two countries face a stalemate and thousands of protesters took to the streets of Tehran.

On Sunday Trump’s National Security Adviser Robert O’Brien boasted that the Trump administration’s sanctions on Iran coupled with protests breaking out in the country, will force Iranian officials to negotiate the deal.

Hours later the president tweeted that he ‘couldn’t care less’ if Iranian officials wanted to negotiate with Washington DC, warning that Iran should instead be careful to not develop nuclear weapons or kill Iranian protesters. 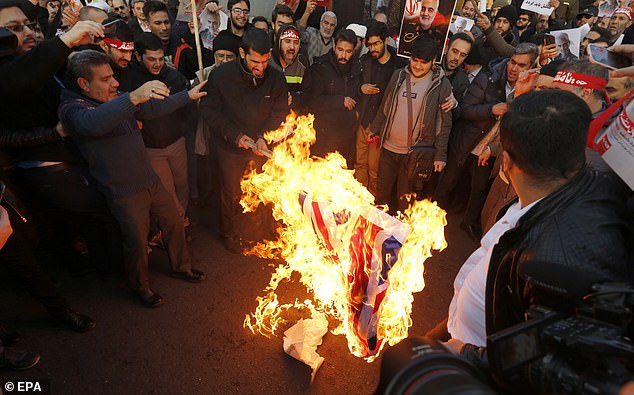 Iranian hardliners pictured burning British and Israeli flags during a protest in front of the British embassy in Tehran, Iran

‘National Security Adviser suggested today that sanctions & protests have Iran “choked off”, will force them to negotiate. Actually I couldn’t care less if they negotiate,’ Trump tweeted Sunday evening.

‘Will be totally up to them but, no nuclear weapons and “don’t kill your protesters,”‘ he sternly added.

O’Brien spoke on Fox on Sunday saying he’s confident that US sanctions and the clamor in Tehran from Iranian citizens will force officials to come to the negotiating table instead of striking back against the US.

‘I think the maximum pressure campaign is working. Iran is being choked off, and Iran is going to have no other choice but to come to the table,’ O’Brien said on Fox News Sunday. 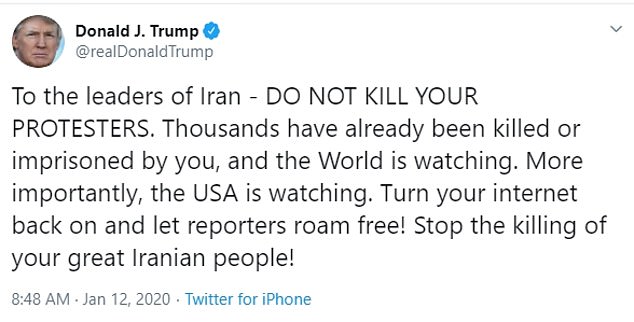 Trump has repeatedly warned Iran this week to not kill the thousands of protesters flooding the streets, many in defiance with the regime and demanding the Supreme Leader Ayatollah Ali Khamenei to step down 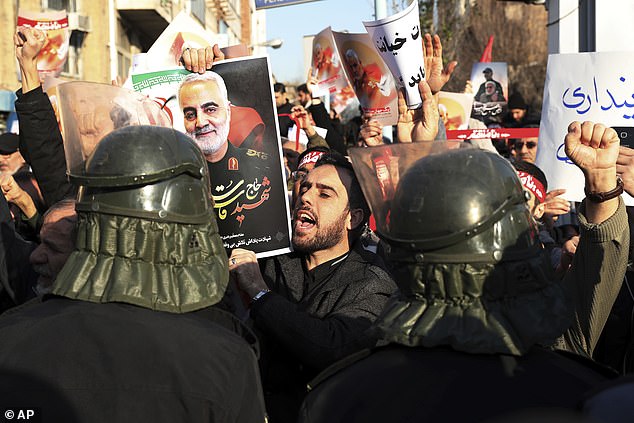 ‘What’s going to cause them to negotiate is the pressure on the economy, and when you’ve got students out there chanting “death to the dictator,” and when you have thousands of Iranians out protesting in the street, that’s the sort of pressure that’s going to bring them to the table,’ he added.

All eyes are turned to the US and Iran to see who will act next.

Over the weekend massive protests erupted in Tehran to decry the government and Iran’s Supreme Leader Ayatollah Ali Khamenei for mistakenly downing a civilian passenger plane in which dozens of Iranian citizens lost their lives.