A mini-heatwave! Britain will enjoy a rise in temperatures and prolonged dry spells over the New Year after torrential rain brought a Boxing Day washout

So far, December’s weather has brought a storm, floods and gales – but the month is set to come to an end with a mini-heatwave.

Temperatures over the coming days could reach highs of 14C (57F) or even 15 (59F), figures not normally reached until April or even May.

Average temperatures for the time of year in England and Wales are 7-9C (45-48F).

The mild weather will see much of England and Wales experience temperatures warmer than Mediterranean cities. 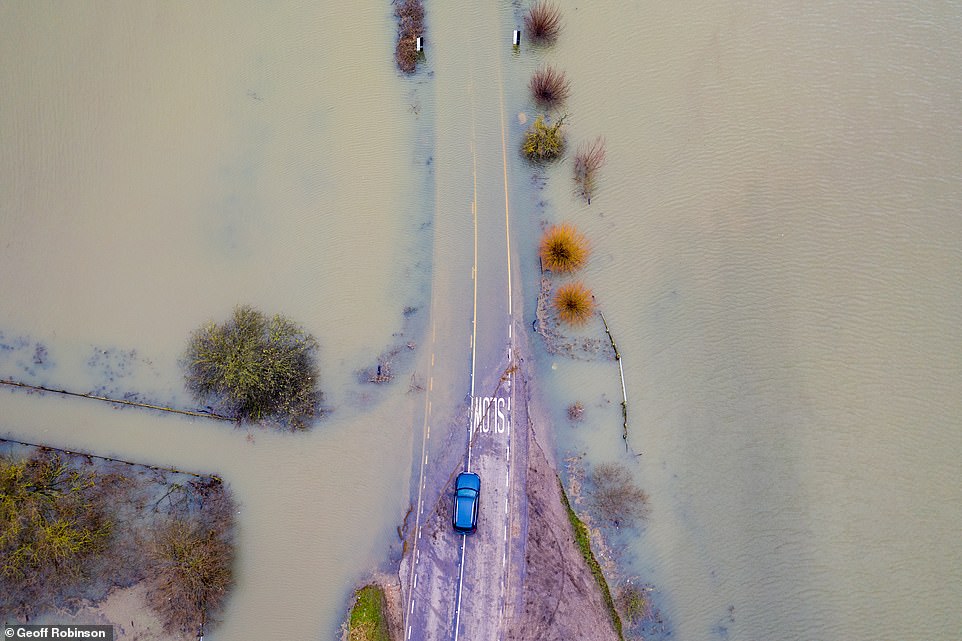 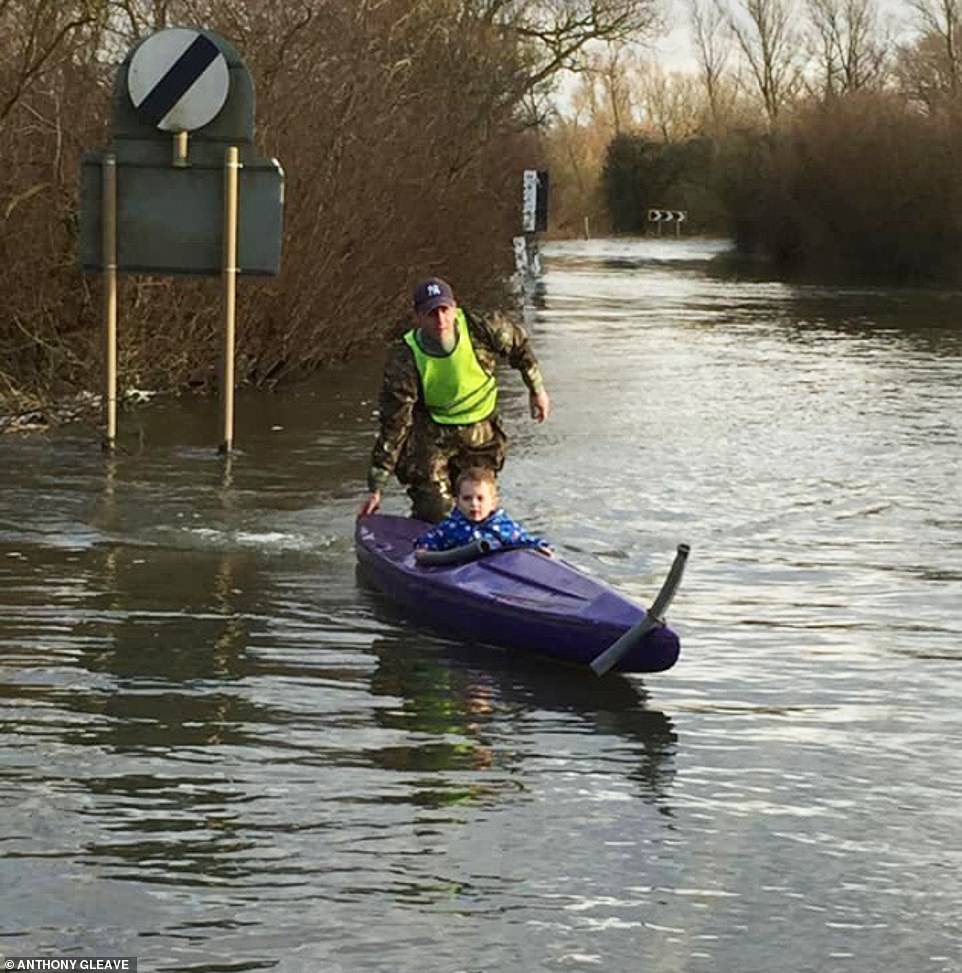 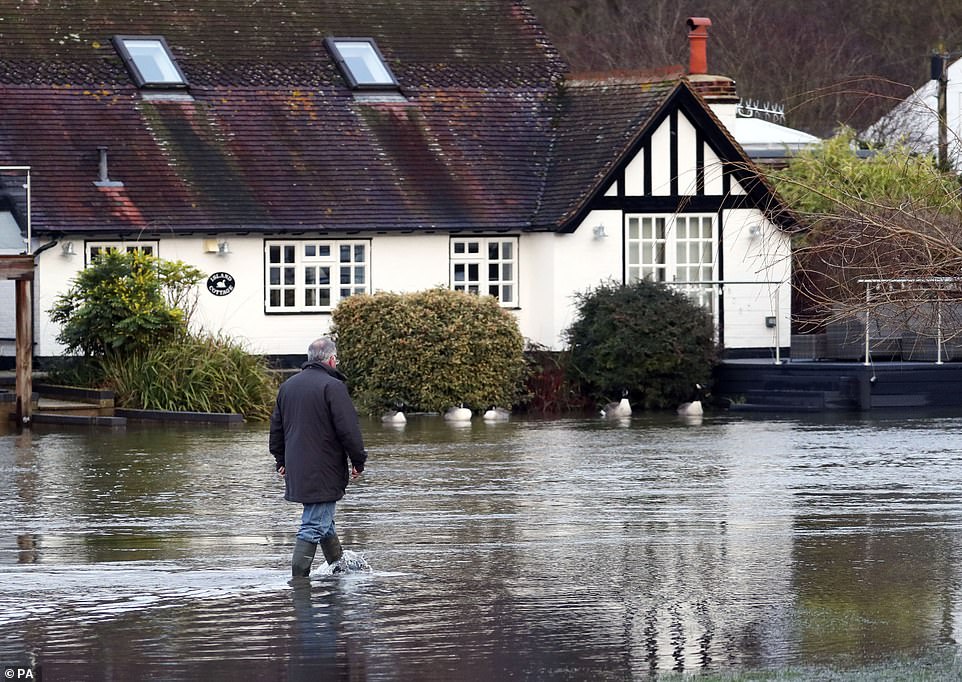 Walkers wade along a flooded towpath in Henley-on-Thames, Oxfordshire after a Boxing Day of heavy rainfall across Britain 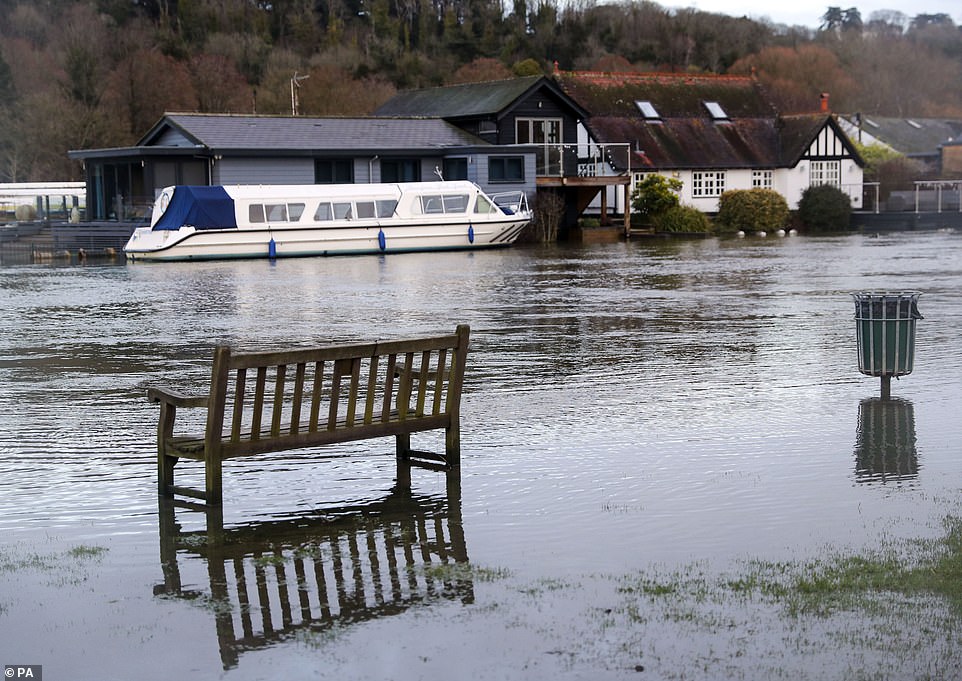 Despite the rain, the weather is expected to improve over the next few days, with temperatures reaching an unseasonably balmy 59F in the run up to New Year

Flooding from a burst water in Downs Barn and Downhead Park in Milton Keynes, with the Fire and Rescue service at the scene 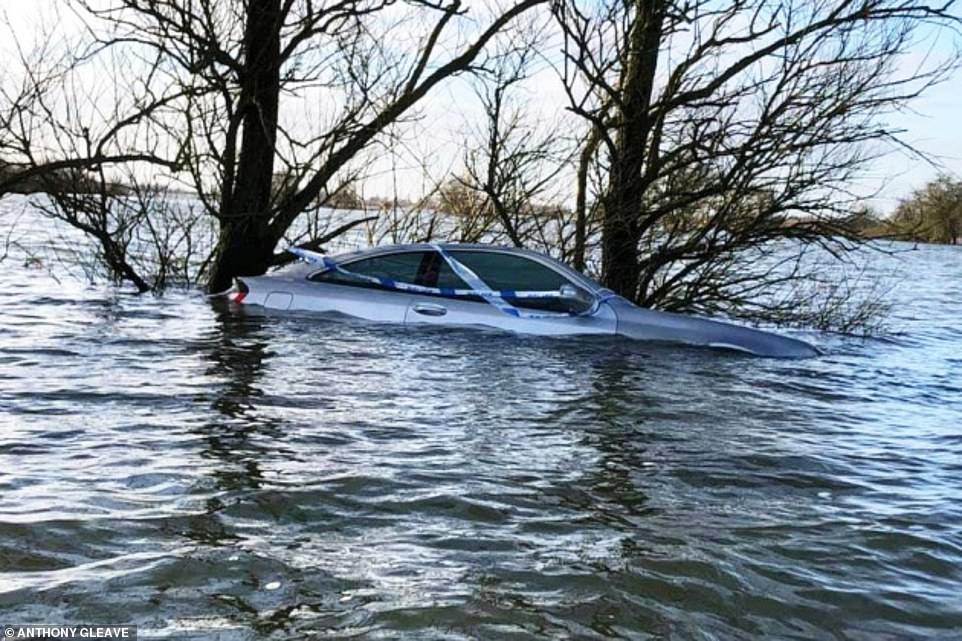 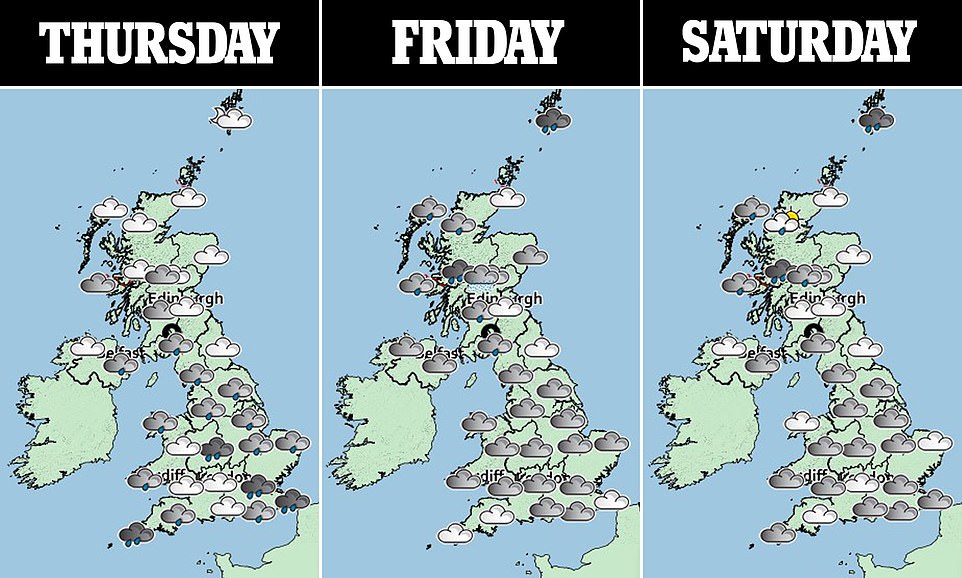 The warmest places are likely to be sheltered parts of North Wales and North East England, the Meteorological Office said.

Even more unusually, the very mild spell is occurring thanks to an area of high pressure, which would typically bring cold and frosty weather from the continent.

This time, however, the high pressure is trapping an area of cloud and mild air.

As a result, sunshine is likely to be limited but no significant rain is expected either.

The breezy but mostly settled conditions follow a weather front which brought rain through Boxing Day and was due to clear this morning FRI.

Emma Smith, Meteorological Office spokeswoman, said: ‘High pressure is building from the south as we head towards the weekend.

‘Some wet and windy weather is still expected for Scotland and Northern Ireland but for many of us it is likely to be cloudy, drier and mild.

‘Temperatures are set to climb into double figures and, by Sunday, we could see temperatures in the mid-teens Celsius in some parts of North Wales or North East England.’ But Miss Smith said the beginning of next week is set to turn chillier as the first high pressure wanes and is replaced by a second one, bringing colder air. 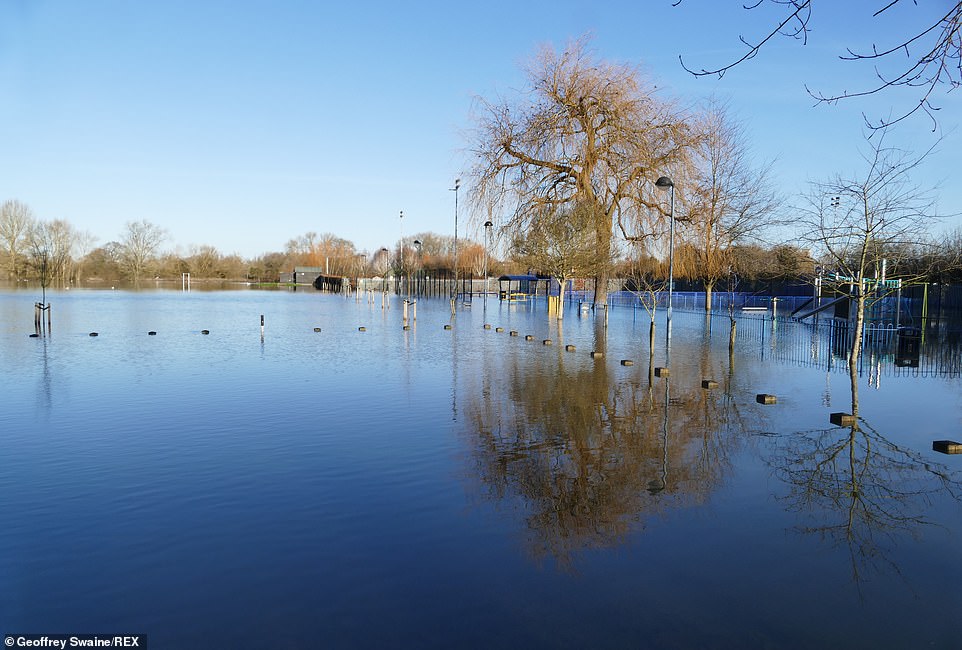 A field is pictured completely underwater  in Botley, Oxfordshire after the nearby River Thames bursts its banks 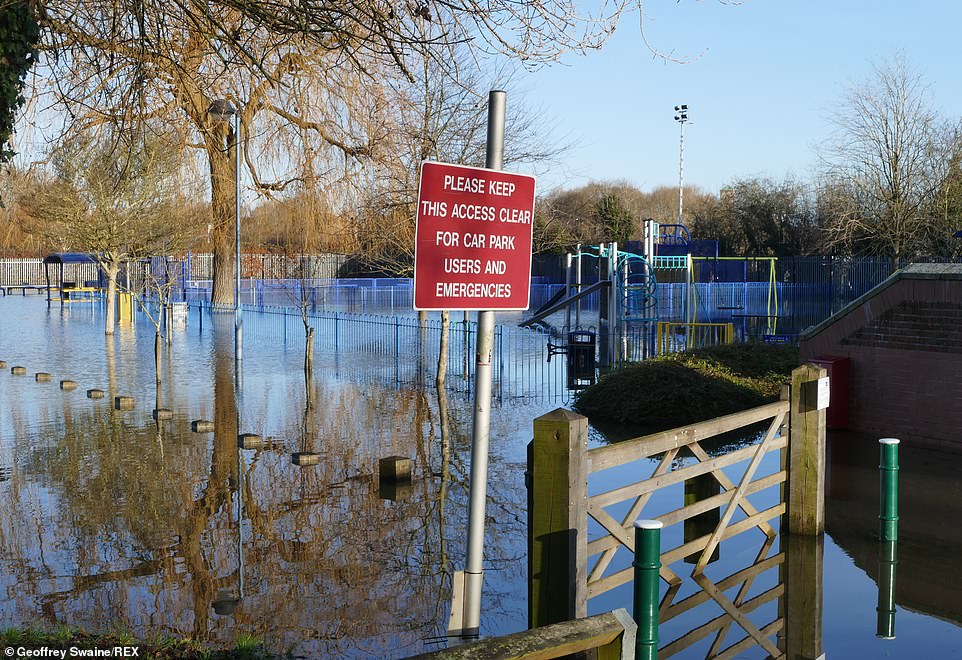 Out of bounds: Youngsters were unable to enjoy their local park in Botley, Oxford today after the nearby River Thames flooded 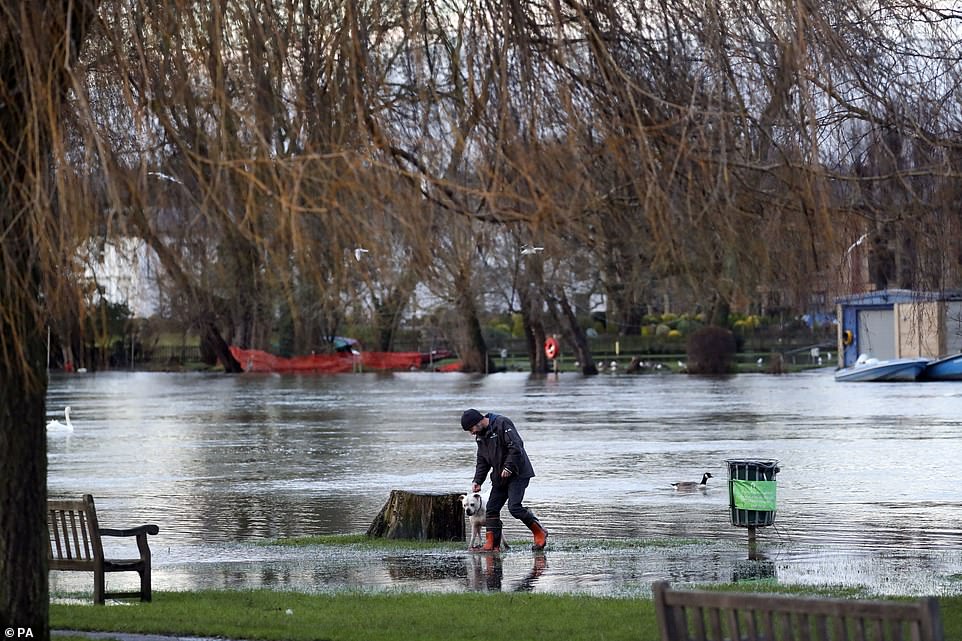 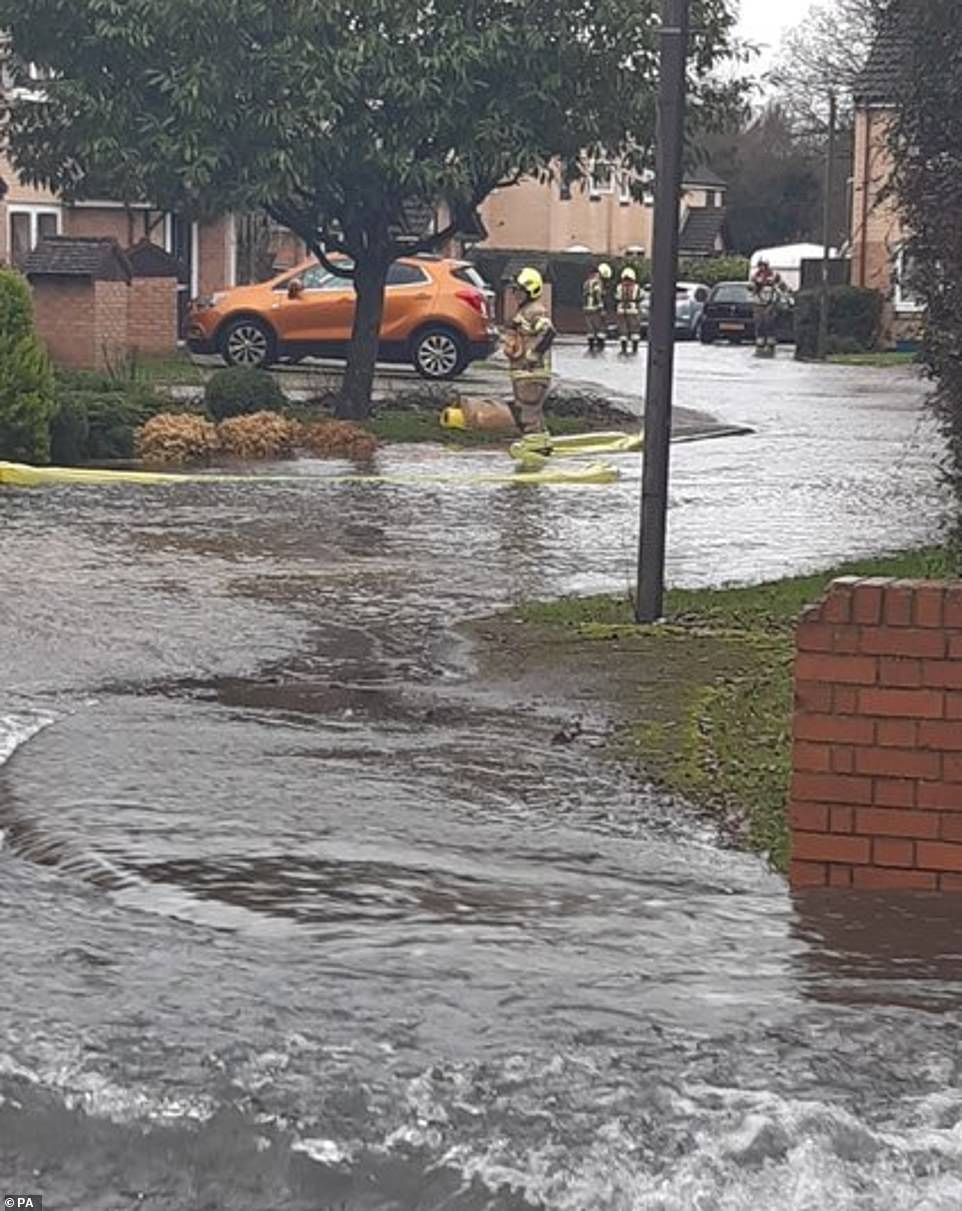 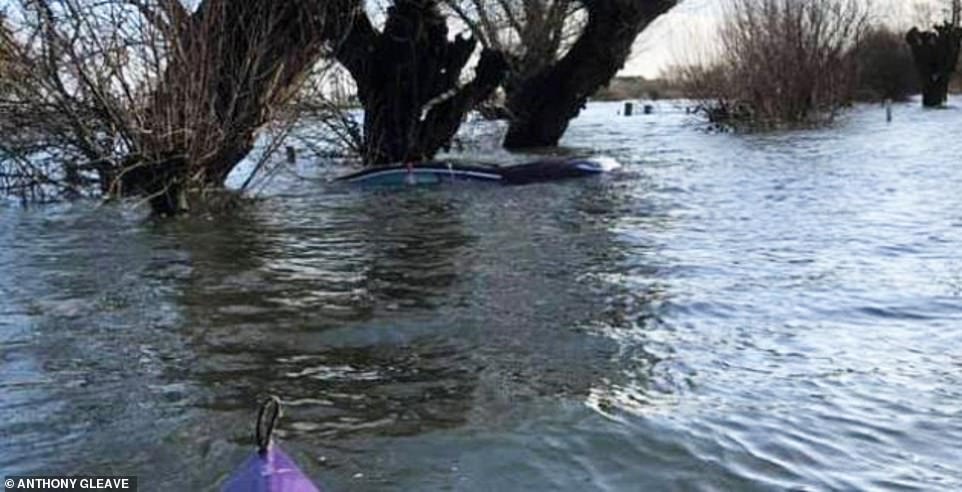 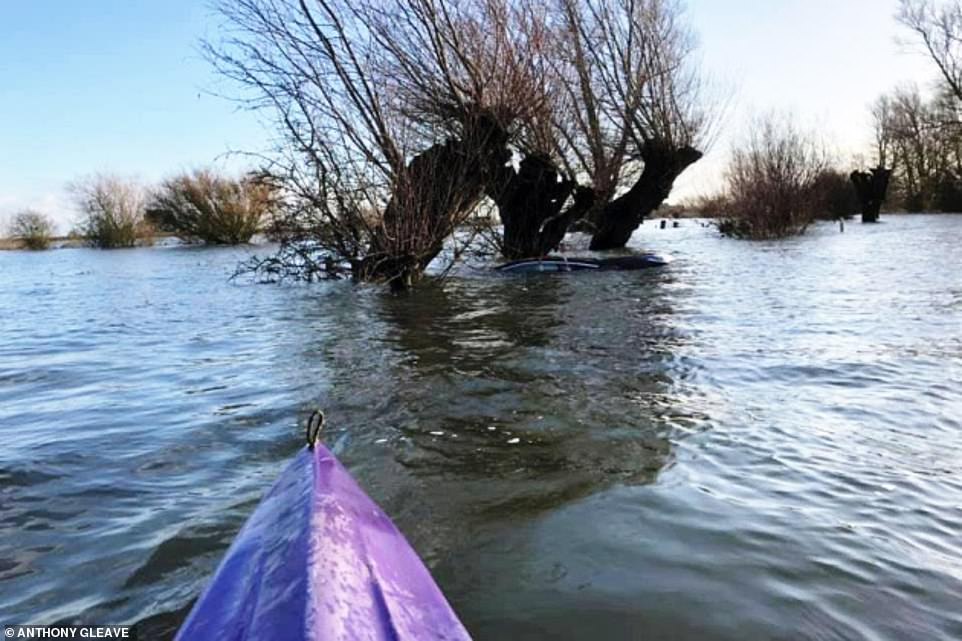 The submerged cars could be worth more than £10,000 each but are now likely to be written off because the floodwater will have ruined the upholstery and damaged the engines 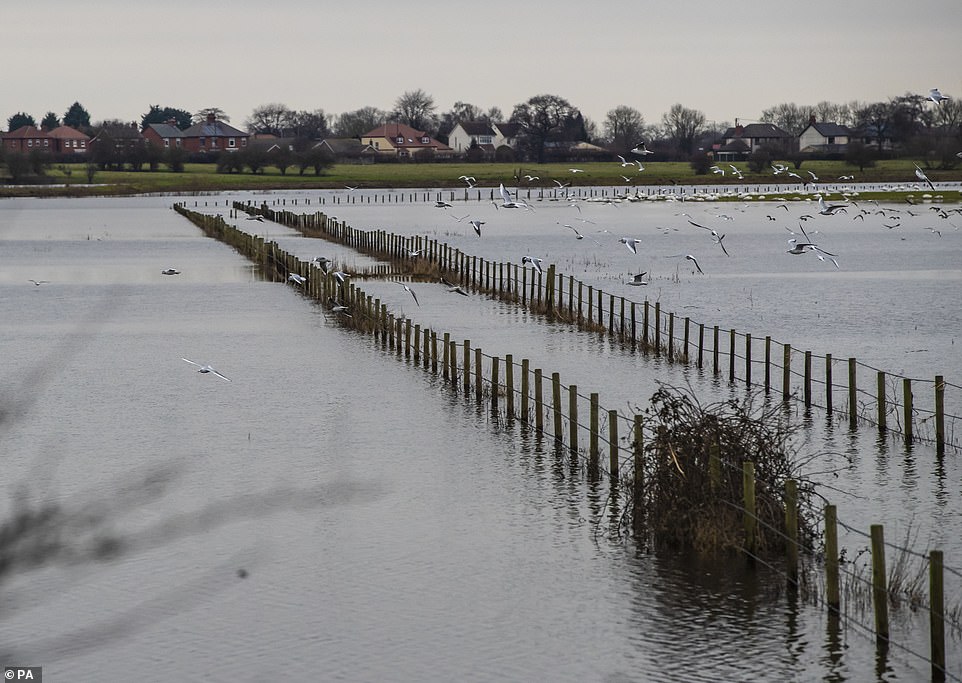 A field is pictured covered in floodwater in Bawtry, South Yorkshire, after torrential rain and flooding in the area on Boxing Day 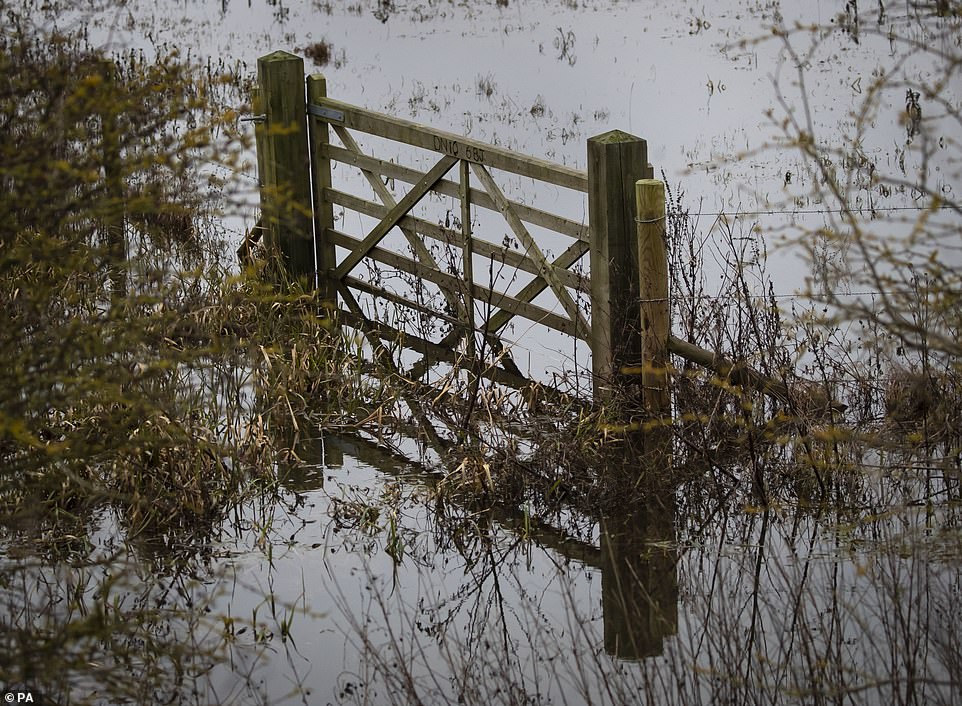 This field is pictured completely flooded on Boxing Day after heavy rain in Bawtry, South Yorkshire 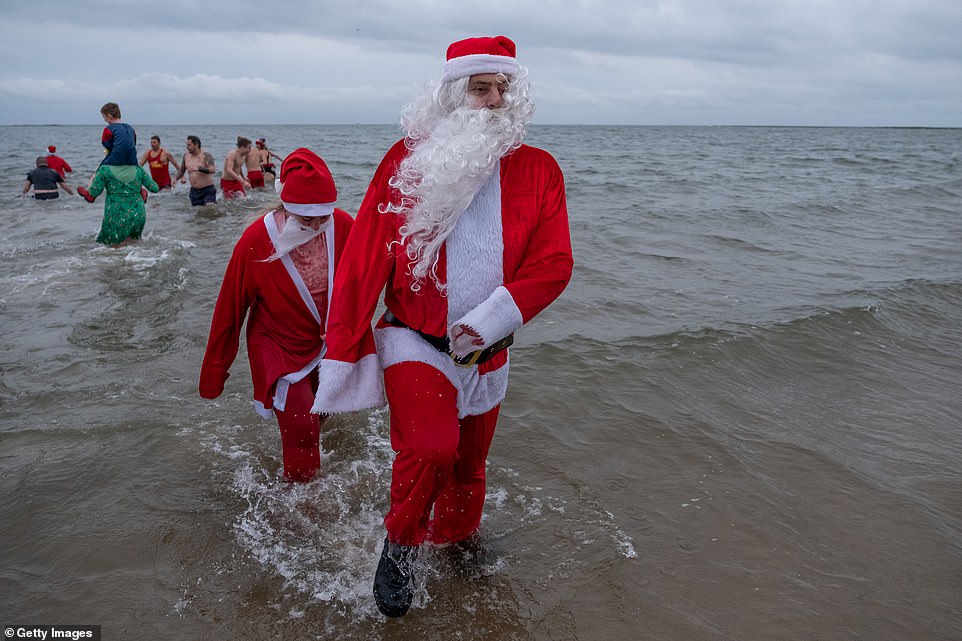 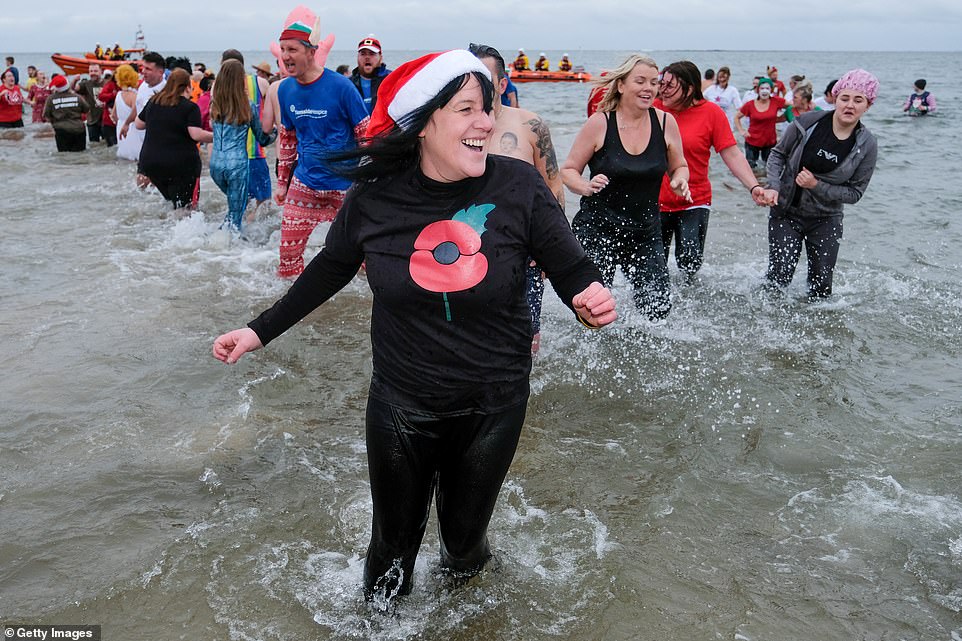 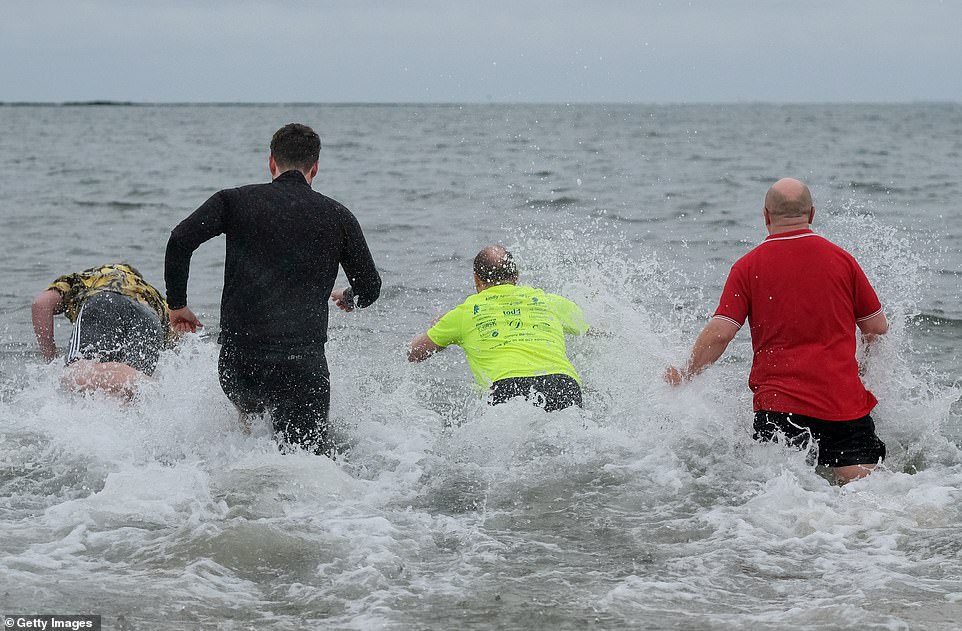 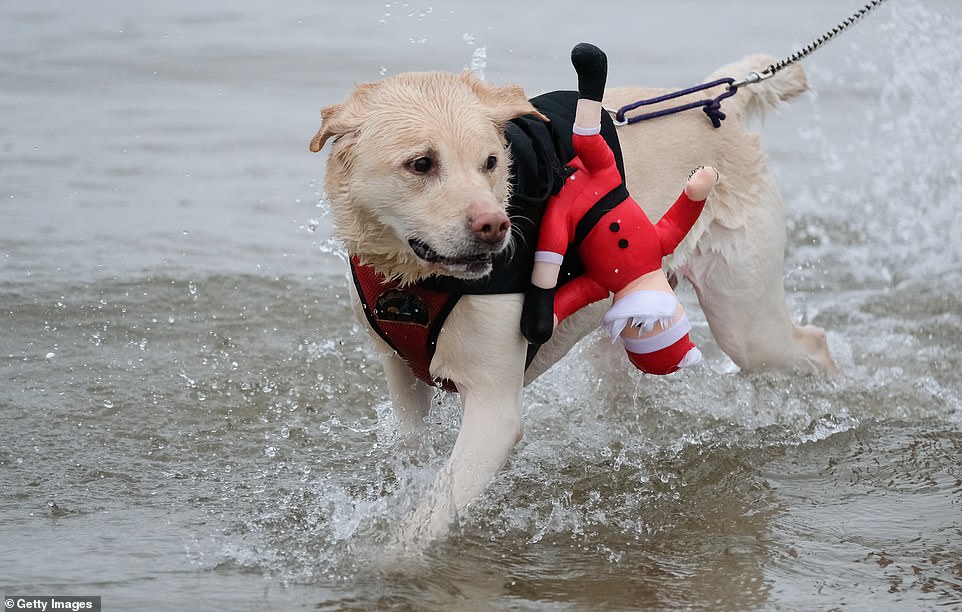 She said: ‘Some areas could see a chilly start on Monday, with parts of Wales experiencing an overnight frost and temperatures even in southern counties of England falling to 1C (34F) or 2C (36F).’ On Monday, some light rain could edge south into north Wales or North West England but elsewhere it should remain dry.

Tuesday could begin with a foggy start but is set to be mainly fine and dry through the day and into the evening for the New Year’s Eve festivities.

Some cloud with the possibility of patchy rain is expected in southern areas.

In its prediction for the New Year, the Met Office says the first week of January is likely to be settled with fine days but chilly nights and overnight frosts.

‘More changeable’ conditions are likely to return for the middle of the month, with wet and windy spells in the north west and the best chance of dry and sunny weather in the south and east.

The settled spell comes after rainfall figures for December up to Christmas Day showed England and Wales have already had a wetter month than average.

Yesterday, parts of England received almost half an inch of rain. At Petersfield, Hants, 11.6mm (0.45ins) fell in the first 14 hours.

In Northern Ireland, an inch of rain fell in the same period.

Up to £1.3 million of extra funding has been pledged by the government to help communities affected by flooding last month.

Communities Secretary Robert Jenrick said South Yorkshire Disaster Relief Fund, which is assisting vulnerable people in some of the worst-affected areas including Bentley and Fishlake, both in Doncaster, would receive match funding.

The fund has raised £500,000 so far and the government said it would match the total, up to a maximum contribution of £1 million.

A further £300,000 will be offered to other areas where flooding has occurred. 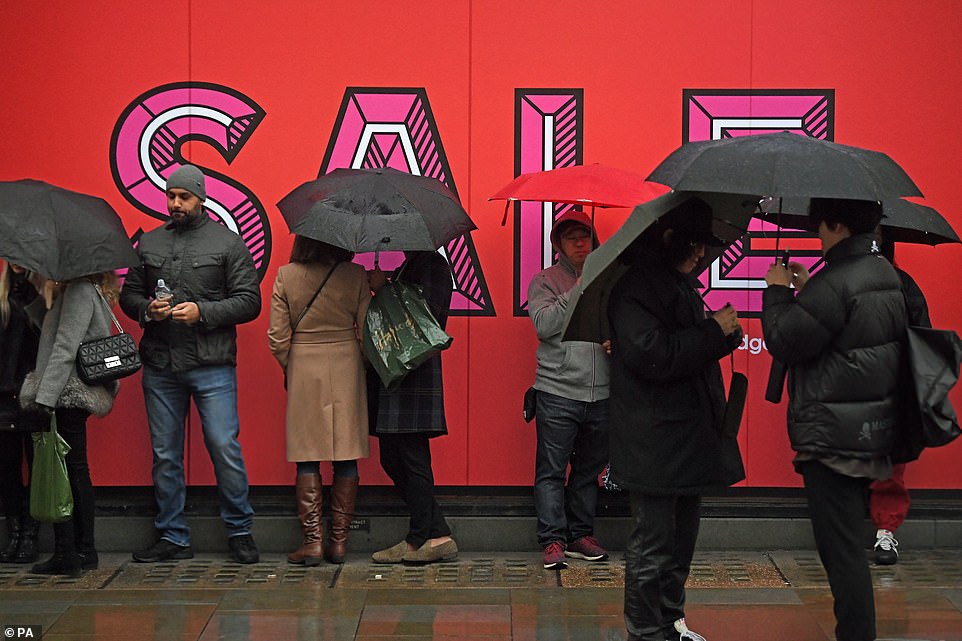 Customers queue ahead of the Selfridges’ Boxing Day sale in London, seemingly not bothered by the rain that will be falling throughout the day 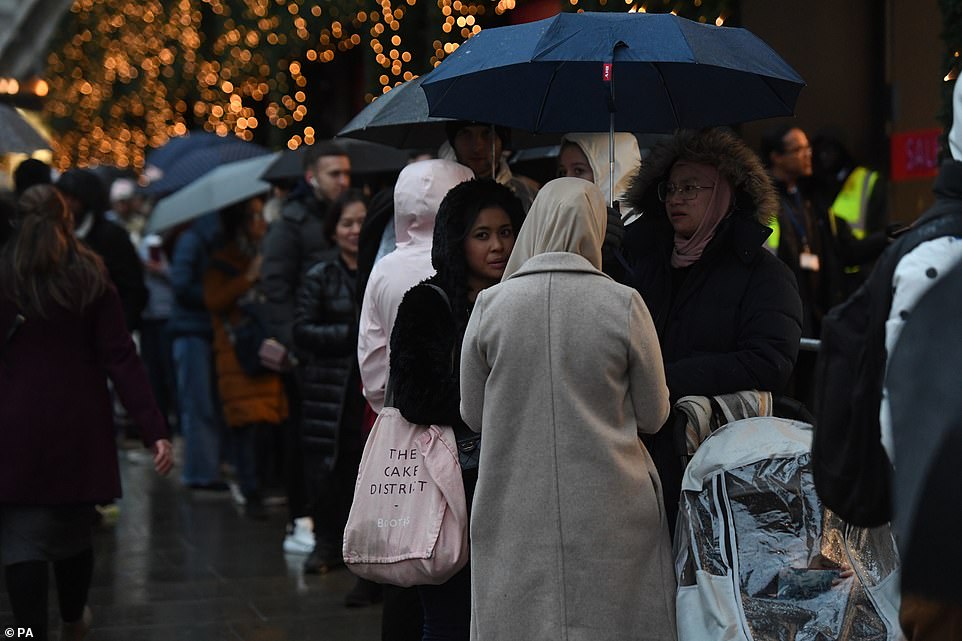 The Met Office has warned that a huge deluge of rain is expected to sweep across the UK on Thursday, affecting shoppers such as these in London 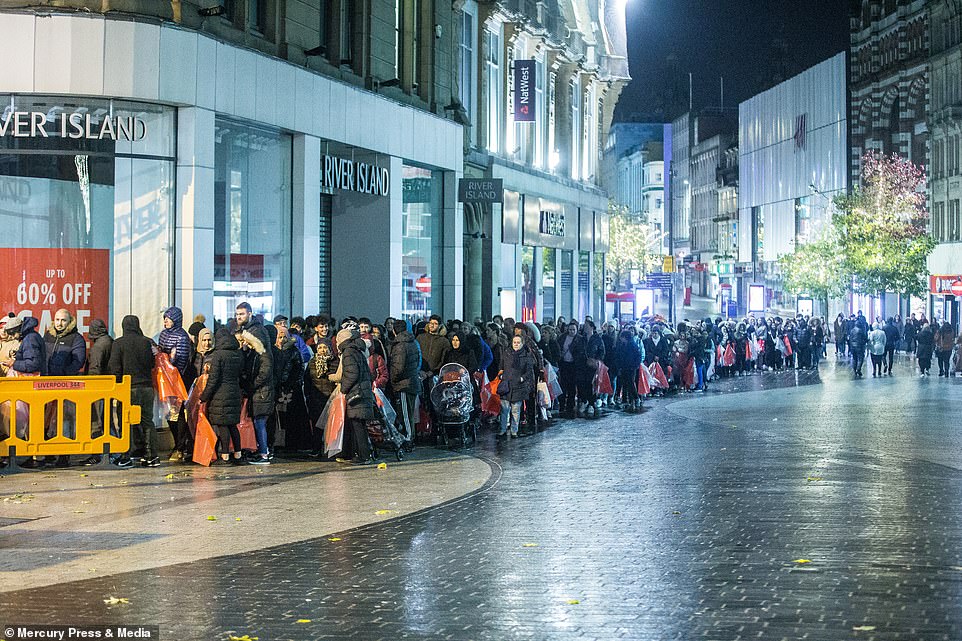 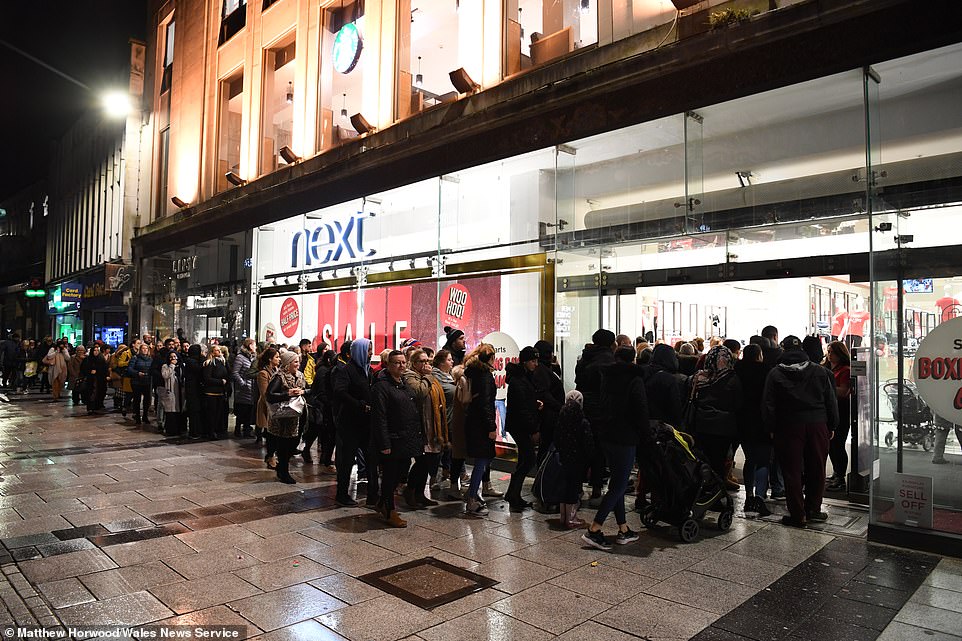 Shoppers at the Next Boxing Day sale at the Next store on Queen Street in Cardiff, Wales are pictured above earlier this morning 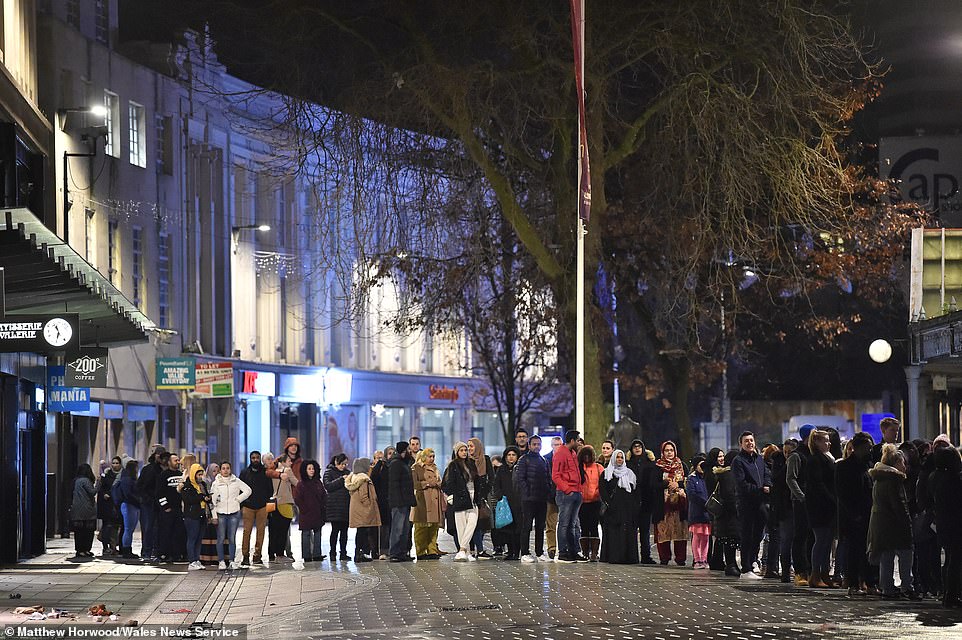