It’s coming home… and so is the scorching weather! Britain will swelter in its first plus 86F temperatures of 2021 on hottest weekend of the year as England’s Euros campaign kicks off during mini-heatwave

A blast of warm air coupled with clear skies over Britain will bring temperatures more akin to Mediterranean resorts by the end of the weekend as England’s first game in Euro 2020 gets underway.

In a small consolation following the closing of the remaining holiday route to Portugal for fed-up Britons, a mini-heatwave could make Sunday the hottest day of the year so far.

After cloudy skies put paid to a glimpse of yesterday’s partial solar eclipse for many, temperatures could reach 86F (30C) in the South East, making parts of England warmer that the Algarve or Corfu.

It comes as the Euro 2020 football tournament kicks off one year late tonight, with Turkey v Italy in Rome – before the first match in Britain is held on Sunday at 2pm as England face Croatia at Wembley Stadium in London.

And UK beaches and beauty spots are set to be swamped with day-trippers, while world leaders and their protection teams gathering in Cornwall for the G7 summit are set for a sticky weekend.

But all good things must come to an end, and the renewed sunny spell looks like it will be short-lived, with the prospect of rain returning by next Thursday. 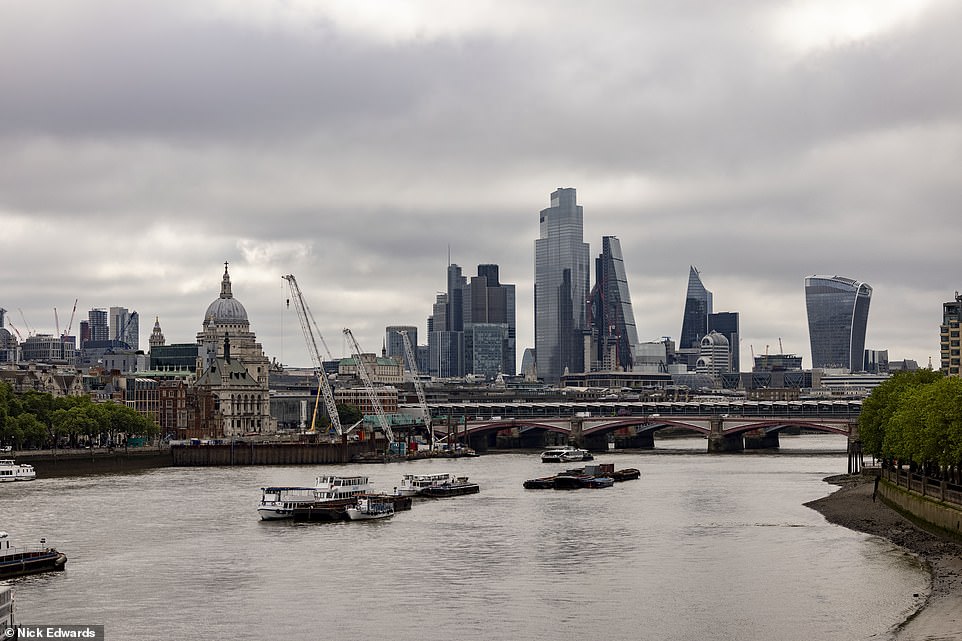 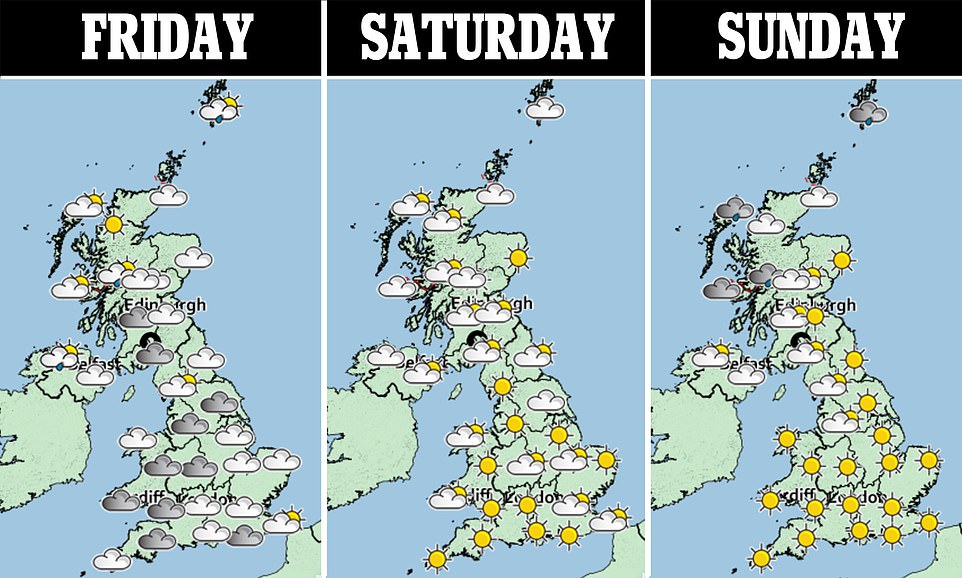 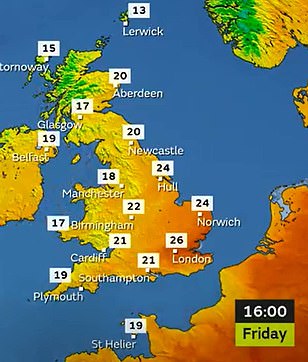 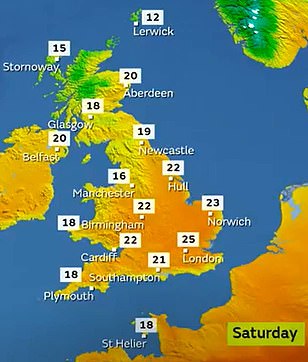 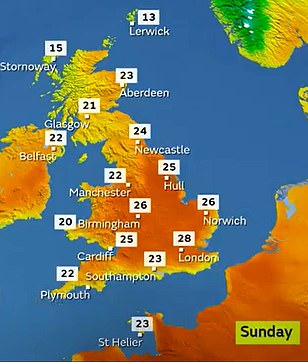 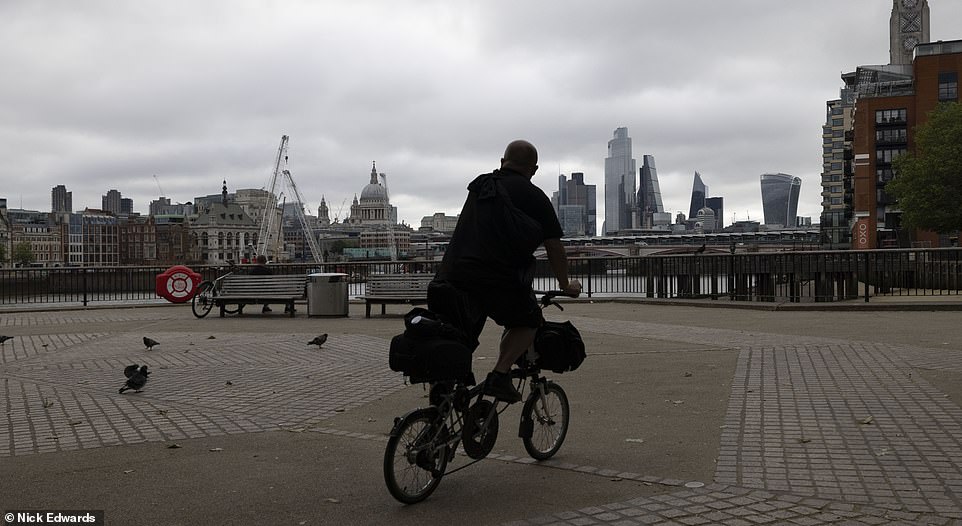 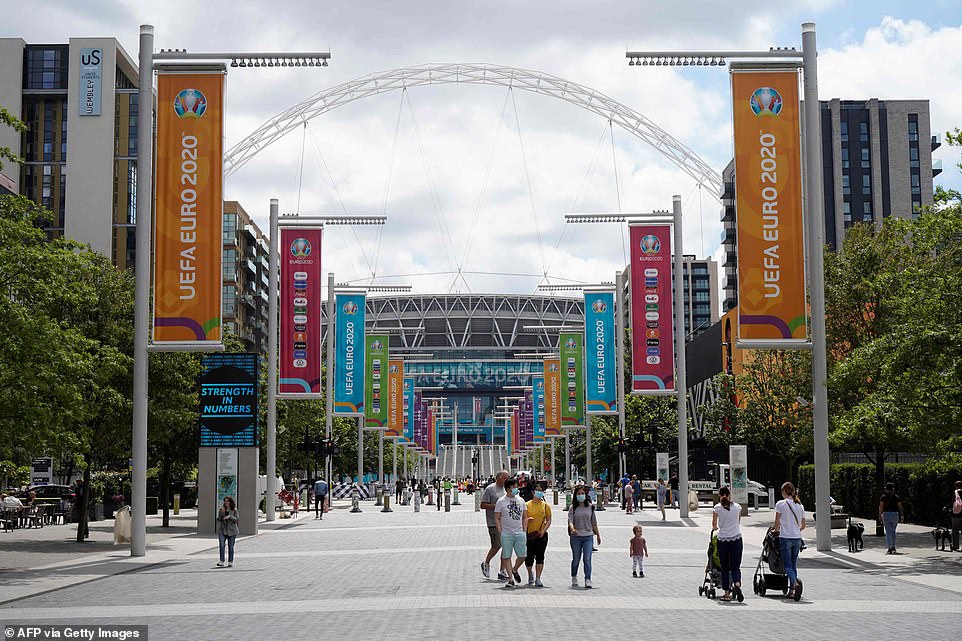 England will play Croatia in their first match of Euro 2020 on Sunday at Wembley Stadium in London, pictured yesterday

‘The weekend will certainly be on the warm side as a result of high pressure building up, with temperatures increasing through Sunday and into Monday,’ Met Office forecaster Greg Dewhurst said.

Maximum temperatures in Britain will get above 70F (21C) for the 16th day in a row today. Here are the UK highs for the previous 12 days, including the hottest day of the year so far which was recorded last week:

‘There’s certainly a chance that figure could be beaten,’ Mr Dewhurst added.

‘But as we go into next week temperatures will be moving back down again with freshening wind and a risk of rain coming in from the north and west.’

Maximum temperatures in Britain will get above 70F (21C) for the 16th day in a row today.

And while tomorrow will remain balmy, temperatures are set to dip nearer the mid-70Fs (mid-20Cs) which means the Met Office does not currently expect to declare an official heatwave.

That would require three consecutive days over a given threshold, currently 81F (27C) in southern England and 77F (25C) in the North.

Nevertheless the warm spell sparked a wave of excitement among bookmakers, with Ladbrokes slashing odds to 1/3 on this month going down as the hottest June ever.

Yesterday morning, some skygazers across the UK were treated to a rare celestial show as observers witnessed a crescent sun during a partial solar eclipse.

Despite cloudy skies, astronomy enthusiasts were able to see nearly a third of the sun being blocked out by the moon.

Parts of the US, Canada, Europe and Asia witnessed an annular eclipse – where the sun appeared in the sky as a very bright ring, or annulus, in a phenomenon dubbed the ‘ring of fire’.

Observers in the UK and Ireland saw a crescent sun instead of a ring, as this was a partial eclipse.

The next solar eclipse will take place in October 2022, and will be visible across Europe, north-east Africa, the Middle East, and West Asia.