Britain’s most feared Tripadvisor critic: One diner is revealed to be behind hundreds of scathing one-star reviews slamming pubs and restaurants as ‘disgusting’, ‘revolting’ and ‘appalling’

He has branded staff ‘obnoxious’, ‘chavs’, ‘oiks’ and having ‘one of those grating accents seen on puppet shows’.

And he has slammed highly rated restaurants as ‘cheap and nasty’, ‘disgusting’, and ‘revolting’.

But for Britain’s most feared Tripadvisor reviewer, these are just a snapshot of the hundreds of scathing one-star ratings he has bestowed upon otherwise popular eateries.

‘Denthecard’ has been revealed as the website’s most dissatisfied diner and has gained notoriety among the pub and restaurant trade in the UK for his damning verdicts which do not hold back. 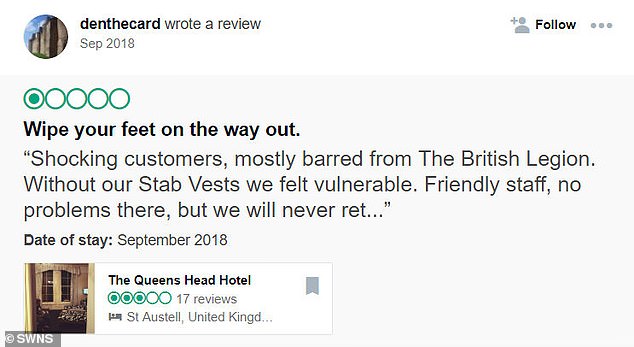 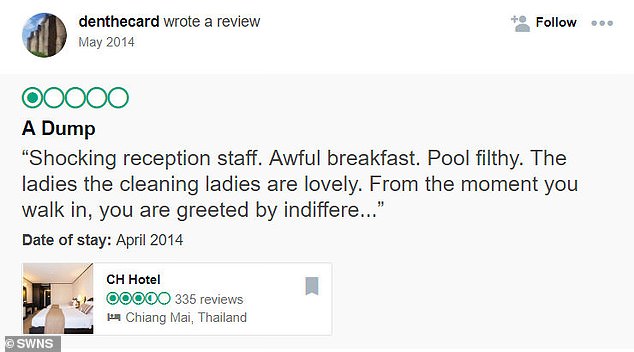 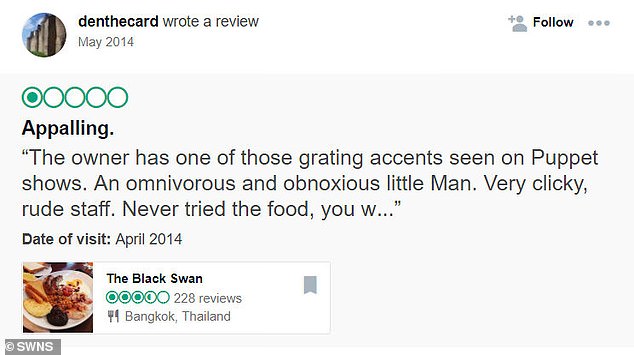 The headlines of his reviews include ‘dump’, ‘appalling’, ‘yuk’ and ‘wipe your feet on the way out’.

He also calls customers and waiters ‘literate builders’ and mocks the ‘feral, uncouth beasts on both sides of the bar’.

This collection of withering put-downs is laid bare on his Tripadvsior profile which shows he is from Birmingham and has travelled 170,00 miles around the world including America, Australia and Malaysia.

But most of his stinging reviews he has posted since 2010 he reserves for dozens of pubs and restaurants in Cornwall and Guildford – as well as Portugal and Thailand.

Restaurant owners are now calling for him to be removed from Tripadvisor as he is costing them business and they are ‘powerless to stop him and it shouldn’t be allowed.’

Roger Cazaly, landlord of the Plume and Feathers in Cornwall, made headlines across the world with wonderfully witty replies to negative reviews on TripAdvisor.

He said of denthecard: ‘He goes all over Cornwall to some of its best venues writing the most vile things. We’re powerless to stop him. This shouldn’t be allowed.

‘I know a lot of businesses are annoyed by what he writes. He reviewed me. I responded to him and he immediately took the review down.

‘This is why Tripadvisor is becoming increasingly irrelevant. People like him can write nasty and damaging reviews but when you tackle TripAdvisor about it they don’t do anything.’ 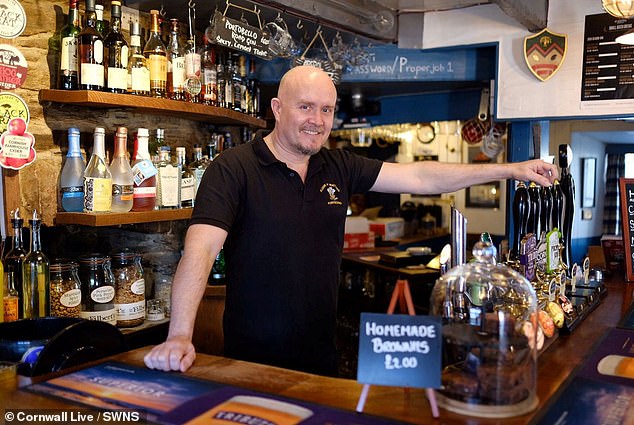 Roger Cazaly, landlord of the Plums of Feathers in Portscatho, Cornwall, made headlines with witty responses to negative comments. But now he is calling for Tripadvisor to act to stop serial scathers

Denthecard wrote of one pub: ‘From the imperious bar lady puffing on a fag outside with the other chavs, it gets worse.

‘All stop at shift change on a Saturday at 14.30, where everyone hides. Just lovely. Cheap and suitably nasty. Never again. Wipe your feet on the way out.’

The landlord of the The Wheel inn in Travellian was one of the few to respond to denthecard when he wrote the following: ‘Food was OK, if you like half a rain forest of rabbit food.

The landlord of the Wheel hit back: ”Obnoxious’. I don’t know if you were referring to me or my other half, could have been either, and this comment concerned me as neither of us would wish to come across in that way.

‘So I had a look at the many reviews you have posted on locations worldwide.. Many of the local venues I know, and I was astonished.

‘The number of times you used the words ‘obnoxious’, ‘arrogant’ and ‘feral’ was amazing. You seem to encounter ‘poor’ service so often – I wonder what that says?’

The Hawkins Arms in Probus regularly tops the list of pubs in Cornwall on TripAdvisor, but it was not spared denthecard’s ire.

He wrote: ‘ Food is quite good, if a tad pretentious. Service a little difficult, obviously we were interrupting a nice chat. Sorry about that. Drinks overpriced and of unacceptable quality.’ 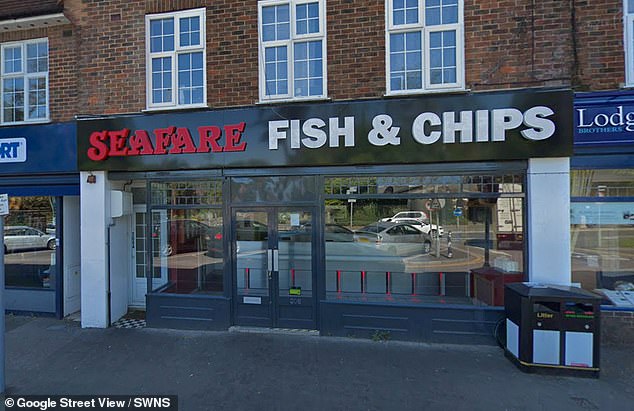 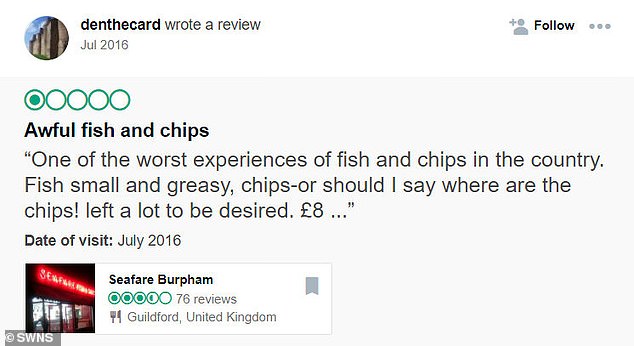 Despite Seafare Fish & Chips (stock image) having a three-and-a-half-star rating, denthecard slammed it as one of the worst chippies in the country

His reviews extend beyond pubs and restaurants, in one scathing critique gym staff at the Waterworld leisure centre feel his wrath.

‘Well equipped, with mostly nice users. However, the staff that train there are arrogant, ignorant and in need of soap. Quite unacceptable.’

Staff needing soap seems to be a popular theme, in his review of the Offshore Extreme Hotel in Newquay he writes: ‘I just wish we had brought extra soap. The feral, uncouth beasts on both sides of the bar, could certainly do with some.’

‘Add to this, the ambience of retired Football Hooligans – and that is just the ladies. One can understand the apathy of the staff.’

The owner of the Black Swan, another English pub in Bangkok get a roasting too, he writes: ‘The owner has one of those grating accents seen on Puppet shows.

‘An omnivorous and obnoxious little Man. Very clicky, rude staff. Never tried the food, you will do well to get a drink.’

Of one Guildford pub he writes: ‘There is still no excuse for a pint of Guinness to be poured so quickly it ends up with a Vicar’s Collar on it. 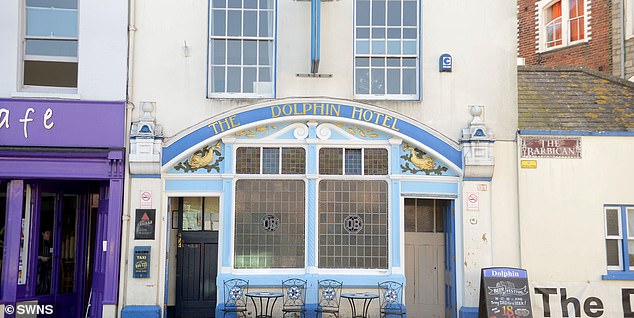 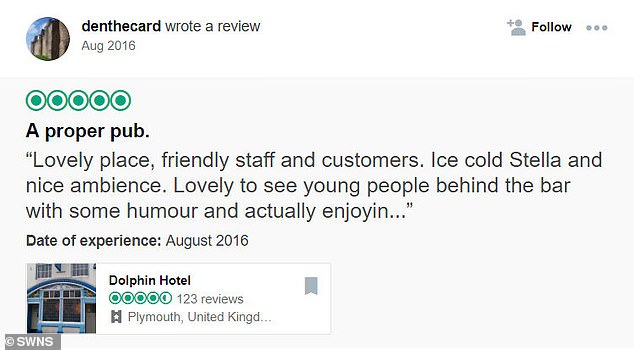 Of the The Star Inn Restaurant in Guildford in 2016 he wrote: ‘The oik with beer knowledge cannot pour a pint.

‘The unwashed using the Men’s toilet as a changing room don’t really add to the overall ambience.’

This isn’t the first time that one-star reviews of Cornish venues have been criticised.

To give denthecard his due, he doesn’t always give one-star reviews.

The Harbour Lights fish and chip restaurant in Falmouth gets five stars and a ‘superb’, as does Roskilly ice cream parlour in Padstow and the Norway Inn at Perranarworthal. 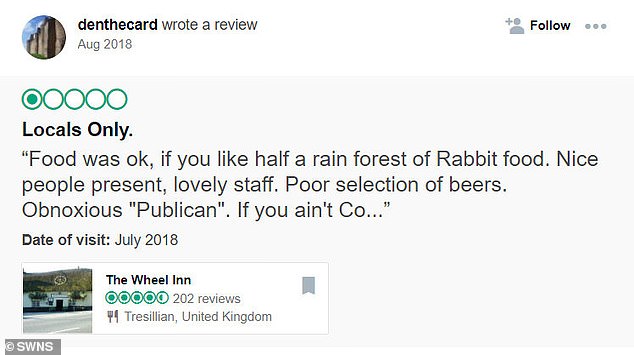 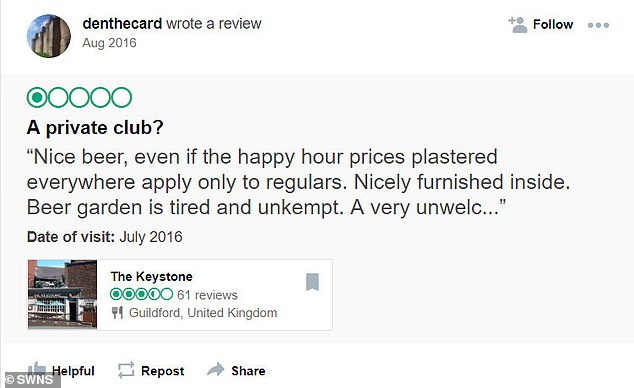 One of denthecard’s most frequent complaints seems to involve the quality of beer. He criticised the Wheel Inn for a poor selection of beers and the Keystone for an ‘unkempt’ beer garden 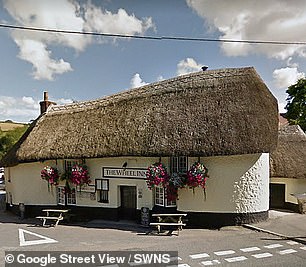