Small quantities of precious metals are embedded in circuit boards and other electronic hardware that are part of a growing pile of gadgets cast away globally each year. A record 53.6 million tonnes of electronic waste was generated worldwide in 2019, according to the United Nations. Less than 20 percent of that waste was recycled – resulting in around $US57 billion ($75 billion) worth of precious metals being thrown away. 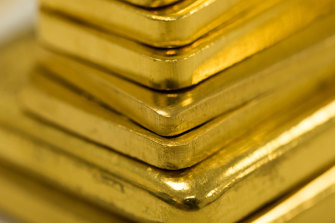 The Royal Mint, which has been making coins in Britain for some 1100 years, announced on Wednesday it is partnering with a Canadian start-up called Excir, which says it can chemically extract the metals.

Instead of electronic waste leaving British shores to be processed at high temperatures in continental European smelters, the precious metals will be recovered at room temperature at a Royal Mint site in South Wales, said a spokeswoman for the Mint. She described the process as more environmentally friendly because it avoids the “ecological impact of burning or smelting.”

Scientists and engineers at the state-owned company are already using the process at small scale, with plans to grow the technology to mass production, the Mint said.

On its website, Excir said its technology could recover 99 per cent of gold from electronic waste “in a matter of seconds.” The company recently received about $US4.3 million in financial support from a Canadian government-affiliated foundation that funds clean technology.

Britain’s exit from the European Union is prompting the country to look for ways to recycle more waste locally. The country’s recyclers have been sending printed circuit boards to continental Europe but expect such costs to increase with Brexit, the Guardian newspaper previously reported.

Industry proponents see huge potential in mining old electronics for precious metals, especially as gold prices soar. There is 100 times more gold in a tonne of mobile phones than in a tonne of gold ore, according to 2019 report by the World Economic Forum. At current prices, one ounce of gold is worth around $US1750.

“The potential of this technology is huge, reducing the impact of electronic waste, preserving precious commodities, and forging new skills which help drive a circular economy,” Anne Jessopp, the Royal Mint’s chief executive, said in a statement.

Excir isn’t the only start-up working on sustainable extraction techniques. New Zealand-based Mint Innovation last year raised funds to build plants in Australia and England, where it planned to use microbes and inexpensive chemicals to recover precious metals from crushed and powdered electronic waste.

Some scientists have questioned just how sustainable and environmentally neutral the mining of precious metals from electronic waste is, however, given it often involves the use of acids.

Excir said the medium it uses to extract the precious metals “is an extremely mild and eco-friendly solution that can be recycled with negligible environmental impact”.

Get a note direct from our foreign correspondents on what’s making headlines around the world. Sign up for the weekly What in the World newsletter here.​