British Airways wants ALL staff not laid off to sign new ‘zero hour’ contracts over plans to make 12,000 redundant – as bosses consider ending operations at Gatwick and even Heathrow

British Airways has asked all staff to sign new ‘zero hour’ contracts that would allow the airline to lay them off without negotiations, it has been reported.

The beleaguered carrier has already announced plans to send 12,000 workers ‘to the dole’ owing to the coronavirus crisis, and warned it may end operations at Gatwick, London City Airport and even Heathrow.

Its Spanish owner, International Airlines Group (IAG), has sought a £900million loan from Madrid for its Spanish-based operations Iberian Airways and Vueling.

However, it has not asked London for a similar bailout. It is thought that this may be in a bid to force other companies out of the UK market.

Unite the Union ordered legal proceedings against the airline yesterday, and demanded that the business supports its UK workers. 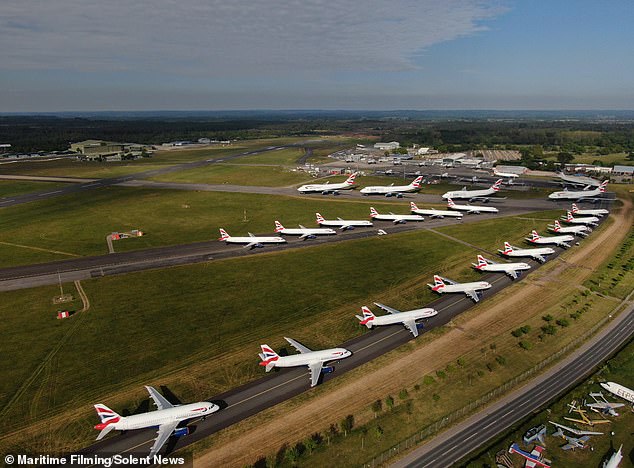 British Airways has reportedly asked staff to sign the contracts as it operates less than five per cent of its normal schedule. BA planes are pictured parked in Bournemouth, Dorset 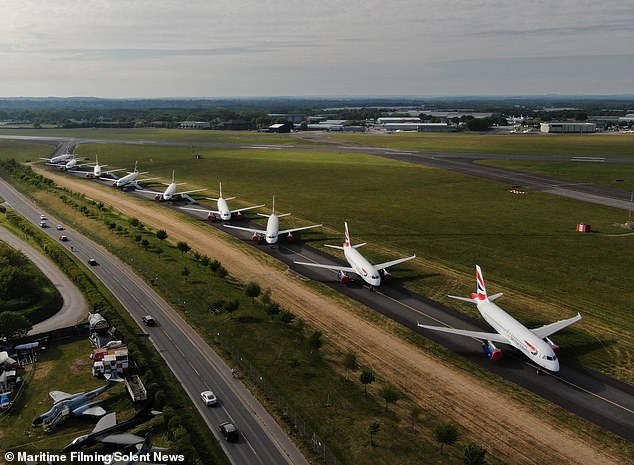 It has revealed plans to lay off a quarter of its workforce, and has furloughed more than half. The planes are pictured above parked at Bournemouth airport 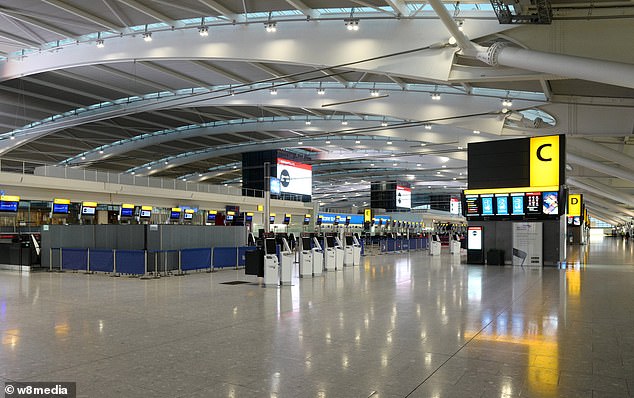 Airlines have been hit hard by the crisis – prompting analysts to warn the industry may implode. Pictured above is empty Heathrow airport

BA’s plan to change staff contracts was reported by The Sun on Sunday, with union leaders fearing employees may be railroaded into the agreement.

He said that while the parent company’s actions to seek a bailout in Spain were to be welcomed, it was ‘concerning’ a similar deal was not being sought in Britain.

‘This is another gross insult to the UK workforce that BA plans to send to the dole,’ he said.

‘Rather than seeking to preserve jobs and workers’ terms and conditions and act for the good of the UK aviation sector, BA is guilty of smash and grab opportunism.’ 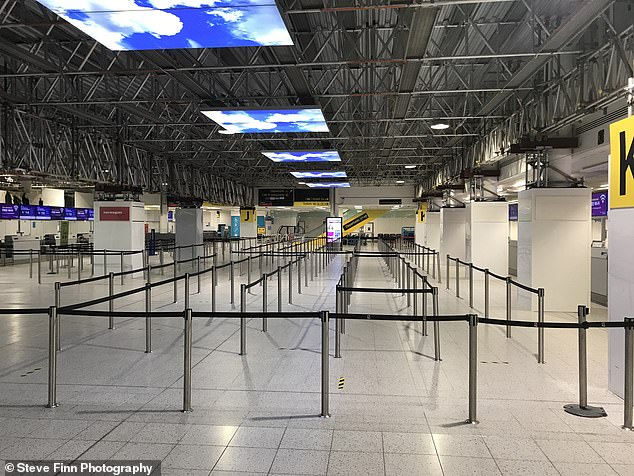 Coronavirus has also seen passengers kept away from Gatwick airport, pictured, as international travel is suspended 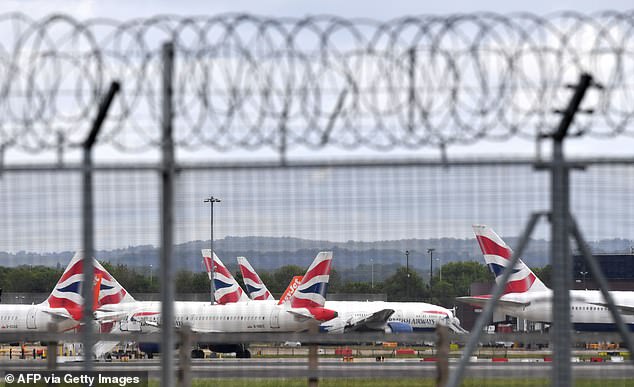 Unite the Union launched legal action against BA yesterday and called on the airline to seek a bailout for its UK workers. So far its owner has only done that for workers in Spain 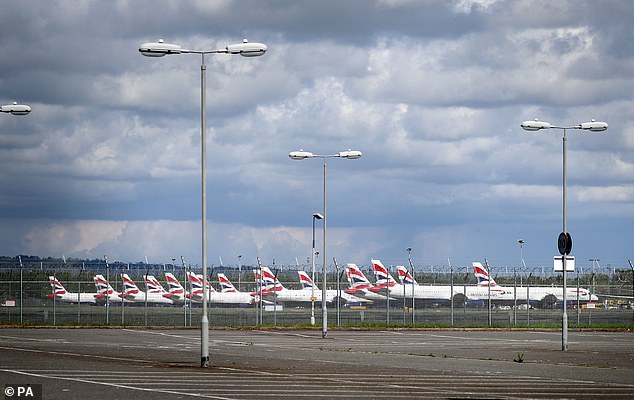 A leaked memo to BALPA this week revealed the airline is considering stopping its last remaining flights out of Heathrow. It has already suspended Gatwick and London City flights

BA’s 12,000 lay offs represent a quarter of its workforce and come after the airline furloughed more than half of its 45,000 workers.

Flybe: Europe’s largest regional airline collapsed on March 5 after months on the brink, triggering 2,400 job losses and left around 15,000 passengers stranded across the UK and Europe. Flybe’s owners, a consortium including Virgin Atlantic, the Stobart Group and hedge fund firm Cyrus Capital, blamed coronavirus for hastening the ailing airline’s collapse. Flybe operated up to 50 UK routes, accounting for 40 per cent of all domestic flights, and was used by 9.5million passengers a year.

British Airways: The International Airlines Group, which also includes Iberia and Aer Lingus, said on March 16 that there would be a 75 per cent reduction in passenger capacity for two months, with boss Willie Walsh admitting there was ‘no guarantee that many European airlines would survive’. The company has since said it wants to reduce the number of staff by 12,000.

easyJet: The airline with 9,000 UK-based staff including 4,000 cabin crew grounded its entire fleet of 344 planes on March 30. The Luton-based carrier said parking all of its planes ‘removes significant cost’ as the aviation industry struggles to cope with a collapse in demand.

Loganair: The Scottish regional airline said on March 30 that it expects to ask the Government for a bailout to cope with the impact of the pandemic. Loganair will go to the government despite being told by Finance Minister Rishi Sunak last week that airlines should exhaust all other options for funding, before asking for help.

Jet2: The budget holiday airline has suspended all of its flights departing from Britain until April 30. A number of Jet2 flights turned around mid-air last month while travelling to Spain when a lockdown was announced in the country.

Virgin Atlantic: The airline said on March 16 that it would have reduced its lights by 80 per cent by March 26, and this will go up to 85 per cent by April. It has also urged the Government to offer carriers emergency credit facilities worth up to £7.5billion.

Ryanair: More than 90 per cent of the Irish-based airline’s planes are now grounded, with the rest of the aircraft providing repatriation and rescue flights. Ryanair CEO Michael O’Leary said his airline would be forced to shed 3,000 jobs while seeking pay reductions of up to 20 per cent by those who remain.

Under the plans the airline would cut 1,130 captain and co-pilot jobs from its headcount of 4,346.

In a leaked memo to BALPA, reported by the BBC, the airline warned it may be forced to suspend the few services it still runs out of Heathrow as there are ‘no clear signs of improvement in air passenger demand’.

‘We have not ruled out suspending the remainder of our Heathrow operation,’ it said.

‘In the last week, we operated fewer than five per cent of our normal schedule.

‘Our Gatwick and London City operations are now closed and there is no certainty as to when these can return.’

Its CEO, Alex Cruz, wrote to staff on April 28 that the airline is having to prepare for a ‘new future’.

There have also been rumours that the airline could pull out of Gatwick and London City airport.

However, the BALPA union’s general secretary, Brian Struttion, said: ‘As far as BALPA are aware there is no truth in the rumour that BA will pull out of Gatwick and there has been no indication of that from BA to us. However, it is on our list of questions to ask them.’

Airlines worldwide have been hit hard by the pandemic, which has seen air travel plummet to near-zero levels as nations impose lockdowns to stem the spread of the disease.

The UK government has turned to Morgan Stanley for advice on packages that could help to keep Britain’s once leading airline sector afloat, following warnings the industry could implode.

EasyJet, Jet2 and Loganair have all grounded their aircrafts as the companies attempt to sit out the pandemic.

Ryanair has also pulled its fleet out of the sky, and announced that it doesn’t expect passenger numbers to tick back up to pre-crisis levels until at least 2022.

Chief executive Michael O’Leary also warned planes would stay on the ground until ‘at least July’.

Wizz Air has announced it was looking to re-start some flights to Spain, Portugal and eastern Europe this month, before saying it would also need a bailout from UK authorities.

The British government has so far been wary of bailing out travel companies and in March allowed regional carrier Flybe to collapse, which became one of the first big corporate casualties of the outbreak. 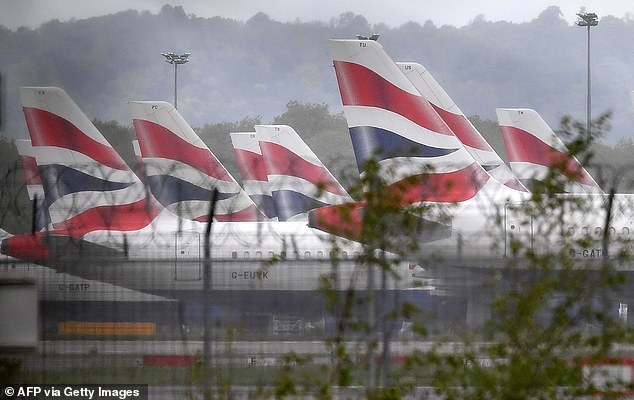 A spokeswoman for Virgin Atlantic said it was exploring all available options to obtain additional external credit, adding it was working with Houlihan Lokey on private sector funding and ongoing discussions with stakeholders were ‘constructive’.

Meanwhile, Branson and the Virgin Group were committed to the airline and were not looking to sell it, a representative for the group said on Friday.

BA said: ‘We can’t comment further while we consult with our unions.’