London: Boris Johnson has survived an attempt to remove him as British Prime Minister by rebel MPs, who argued he was no longer an electoral asset and likely to lead the government to a substantial election defeat in two years’ time. 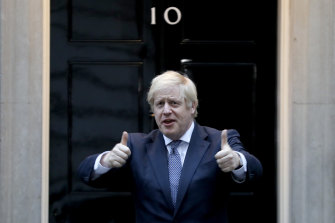 British Prime Minister Boris Johnson as avoided an attempt from rebel backbench MPs to remove him from office. Credit:AP

Johnson retained his position with a margin of 63 votes, with 211 MPs voting in favour of him remaining and 148 against, 1922 Committee chairman Sir Graham Brady told reporters at the Palace of Westminster on Tuesday morning AEST.

All 359 Tory MPs, including Johnson, were given a vote in secret on a simple yes/no basis on whether they had confidence in the leader.

The vote of confidence in the Conservative leader was triggered after the threshold of 54 MPs – or 15 per cent of the party room lodged letters that they had lost confidence in their leader following a string of scandals, including the so-called “Partygate” affair. The rebels needed 180 votes to remove him from office.

Johnson swept to power in July 2019 following the resignation of Theresa May on a platform of delivering Brexit, uniting the country, and defeating Jeremy Corbyn. Just five months later he secured an 80-seat landslide victory on the promise to “get Brexit done”, inflicting Labour’s worst postwar defeat on Corbyn in the process.

At a meeting with backbenchers before the vote, Johnson appealed to MPs with promises of tax cuts and a major economic package next week. He warned MPs that there was no one with an “alternative vision” after Jeremy Hunt, a potential leadership rival, said earlier in the day that he would vote to remove the prime minister.

In an earlier letter to Tory MPs, Johnson promised to use Conservative principles to take advantage of new freedoms, cut costs, and drive growth.

The backbench rebellion had grown in the past 10 days, with a one-page memo widely circulated as to why they believed there was a change needed in the leadership.

“The damage done to trust in Boris Johnson is such that popular policies are falling flat with the public (e.g. cost-of-living measures),” the memo said. It said he had been dubbed him the “Conservative Corbyn”, a reference to the former Labour leader who had become a drag on the ticket.

The group entered the vote lacking the confidence that there were enough MPs willing to remove Johnson, and declared that should he win narrowly, his authority within the “would be destroyed”.

“Most Prime Ministers would resign; however it has been suggested that he would consider calling an early General Election (despite the obvious electoral risk) as the only way to restore his personal mandate. This would put MPs in marginal seats at risk.”

There had been no declared challenger to Johnson for the leadership, something his enemies believed may have helped the prime minister hold on to his job.

His leadership will again be put to the test at two difficult by-elections on June 23, following the departure of MPs in Tiverton and Honiton, and Wakefield – both in scandal. The polls suggest the Tories could well lose both.

When a no-confidence vote was held in December 2018 on Theresa May, Johnson’s predecessor, she won by a margin of 200 votes to 117. However, she did not have a majority on the floor of parliament and struggled to pass legislation, leading to her resignation a few months later.