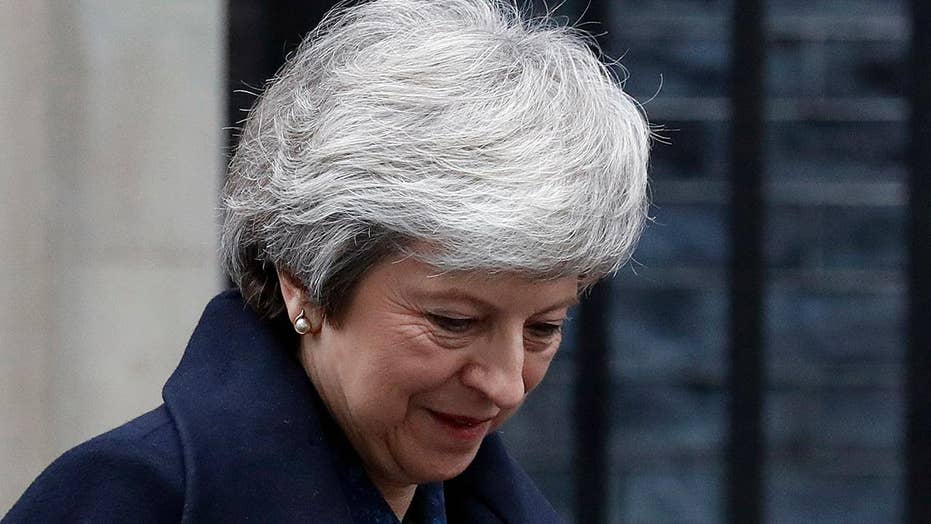 No-confidence vote could oust Theresa May

Conservative lawmakers expected to vote on the British prime minister’s future in light of the Brexit deal.

British Prime Minister Theresa May is wielding her importance to the fragile Brexit negotiations as a cudgel Wednesday as she looks to beat back an impending no-confidence vote in parliament, saying the country's fragile divorce from the European Union could be delayed — or even scrapped — if she's removed from power.

“A change of leadership in the Conservative Party now will put our country’s future at risk and create uncertainty when we can least afford it,” a defiant Theresa May said in a statement outside 10 Downing Street on Wednesday, just hours before Parliament members were set to cast their votes.

“The new leader wouldn’t have time to renegotiate a withdrawal agreement and get the legislation through Parliament by 29 March,” she continued.

British politics was thrown into chaos and Brexit into doubt when Conservative Party lawmakers triggered a no-confidence vote Wednesday against May, who vowed to fight the challenge “with everything I’ve got.”

The vote will be held in Parliament between 6 p.m. and 9 p.m. local time on Wednesday evening, with the results announced soon after.

‘The Lord of the Rings’ actor Andy Serkis got back into character as the iconic Gollum to mock British Prime Minister Theresa May’s controversial Brexit deal. Serkis plays May as both Gollum and his ‘Lord of the Rings’ alter ego Smeagol.

Graham Brady, who heads a committee overseeing Conservative leadership contests, said he received letters from at least 48 lawmakers asking for a vote.

As a result, he said, “the threshold of 15 percent of the parliament party seeking a vote of confidence in the leader of the Conservative Party has been exceeded.”

If she loses the confidence vote, May must step down and there will be a contest to choose a new leader. She will remain leader, and prime minister, until the successor is picked. If she wins, she can’t be challenged again for a year.

Many Tory lawmakers have been growing angry with May over her handling of Brexit, and the challenge comes days after she postponed a vote to approve a divorce deal with the EU to avoid all-but-certain defeat.

“I have devoted myself unsparingly to these tasks ever since I became prime minister, and I stand ready to finish the job,” May said.

Many supporters of Brexit say May's deal fails to deliver on the clean break with the bloc that they want.

Former Environment Secretary Owen Paterson accused May of acting like a "supplicant" in dealings with the EU.

"She's not the person to see Brexit through," he said.

Leading pro-Brexit legislators Jacob Rees-Mogg and Steve Baker said in a joint statement that "in the national interest, she must go."