BRITS trapped in a coronavirus-ravaged hotel in Tenerife are enjoying champagne and sun loungers during their quarantine.

Guests at the H10 Costa Adeje Palace have been told to self-isolate in their rooms after an Italian couple were diagnosed with the bug. 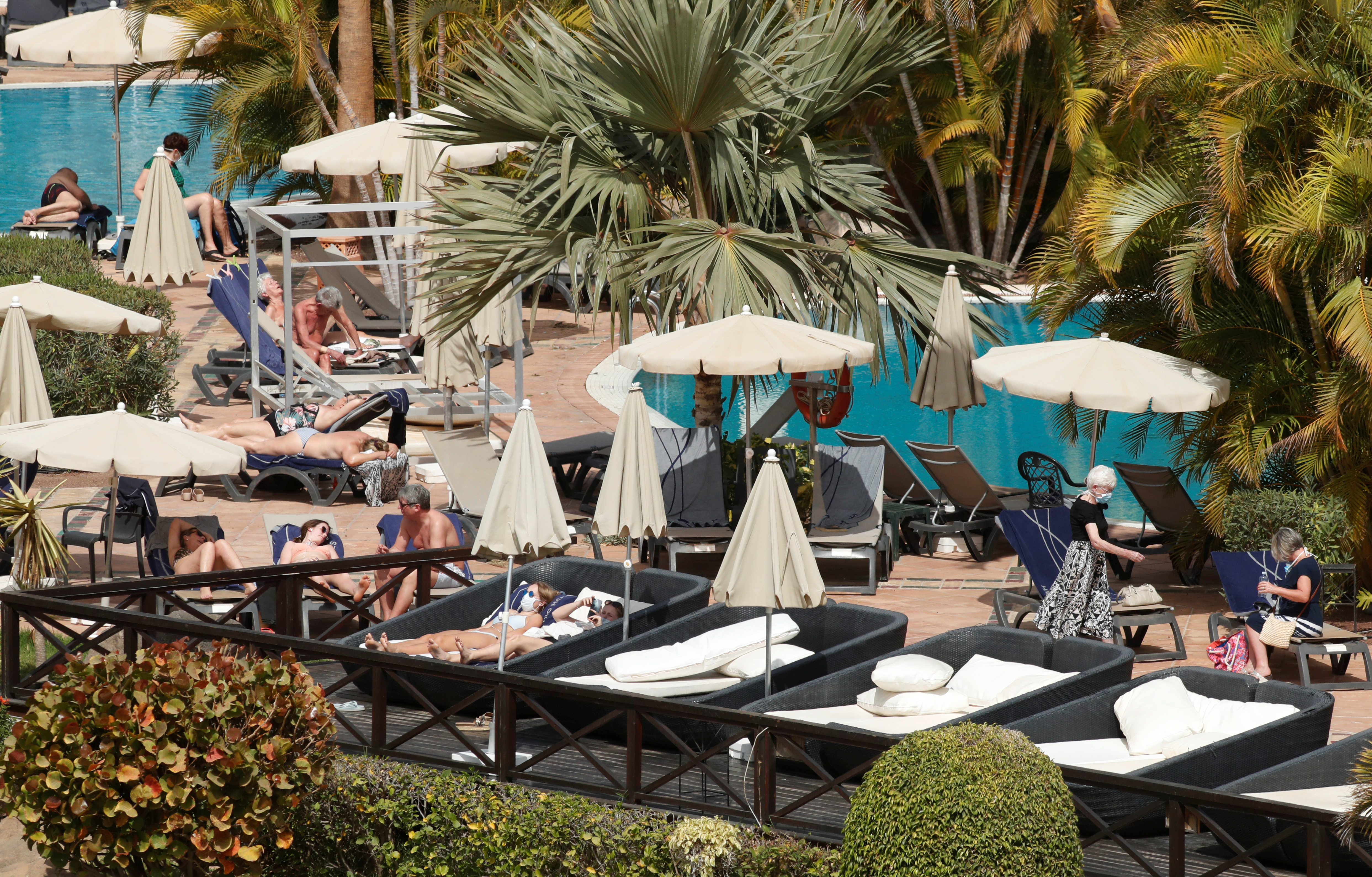 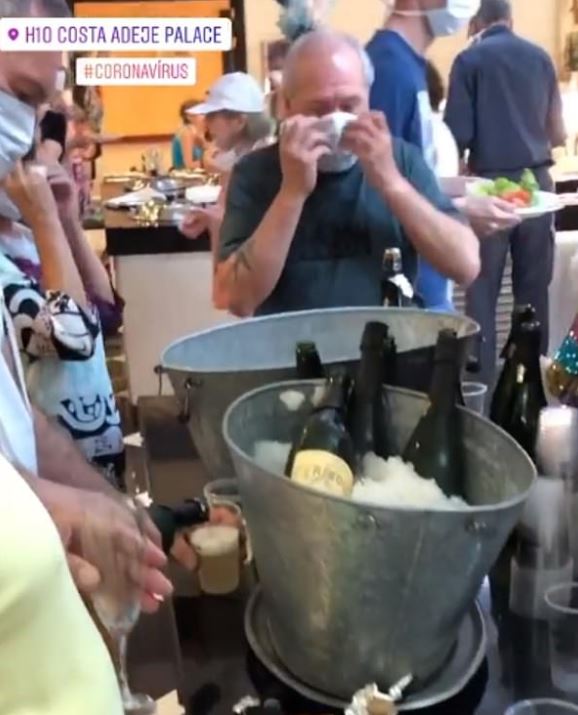 However pictures on social media show guests roaming around the complex and even indulging in champagne at the buffet.

Other pictures show guests wearing protective face masks while they soak up the sun by the swimming pool.

Around 160 Brit holidaymakers are staying at the complex which is being patrolled by police.

Guests have told Press Association said that there is confusion over whether they should stay in their rooms.

They have been handed thermometers and told to write down their own readings, while others are moving around the hotel and going to the pool and restaurant even though they have been advised to stay in.

The El Pais newspaper said 800 guests from 25 countries are in the hotel, along with around 200 workers.

It reported that two security perimeters remain around the hotel, while a "field hospital" has been set up to treat anybody with coronavirus symptoms.

Court Amys, 31, from Hertfordshire, who is staying in his room with his partner  Hannah Green, 27, and their one-year-old son, said that nobody had approached them to take their temperature.

He said he had seen guests heading off to the pool and the restaurant was now open, which "makes no sense".

Mr Amys added: "I'm obviously worried for my child but we're getting there. I just need some information really. 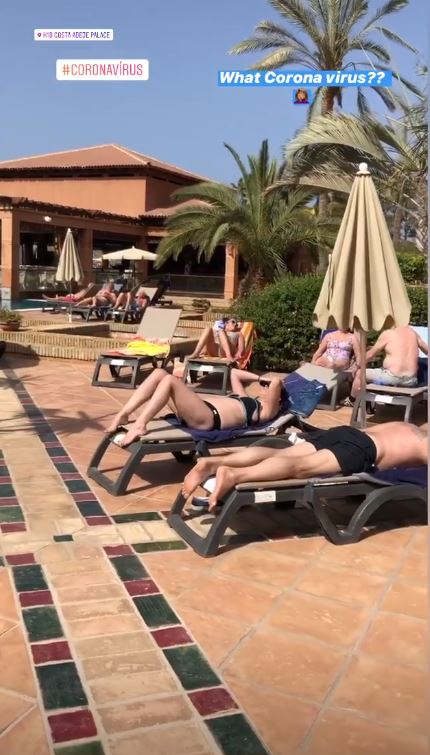 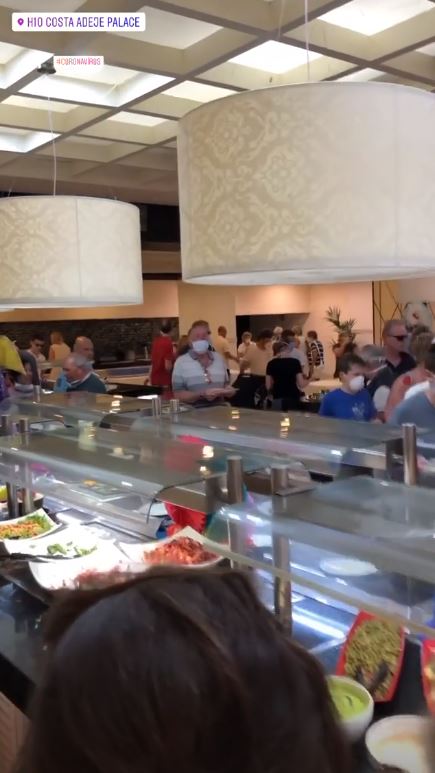 "I've been putting the mask on and going for a walk to keep track of things but they're still not telling us anything, they're just saying 'Stay in your rooms'.

"They're also saying they're serving lunch in the restaurant today, which makes no sense to me.

"What they're saying is 'Keep your masks on, don't sit too close to people'.

“It's impossible, the restaurant's going to be absolutely chaotic with everybody down there.

Court, an electrician, said he has been going down to the buffet restaurant and bringing food back up to the room for Hannah and the baby.

He said: "I'll be putting the mask on and going down to bring some food back up for my family.

There's a few people down by the pool trying to make the most of the sun, but everyone's got a mask on

"There are a few different restaurants on site but the only one that's going to be open is the buffet restaurant.

"Everyone's touching everything and it just doesn't make any sense at all.

"There is quite a few people out and about but everyone's got masks on.

"There's a few people down by the pool trying to make the most of the sun, but everyone's got a mask on."

Meanwhile, hotel bosses are being asked for names of holidaymakers in a hunt to track down those who have flown back to the UK carrying the bug. 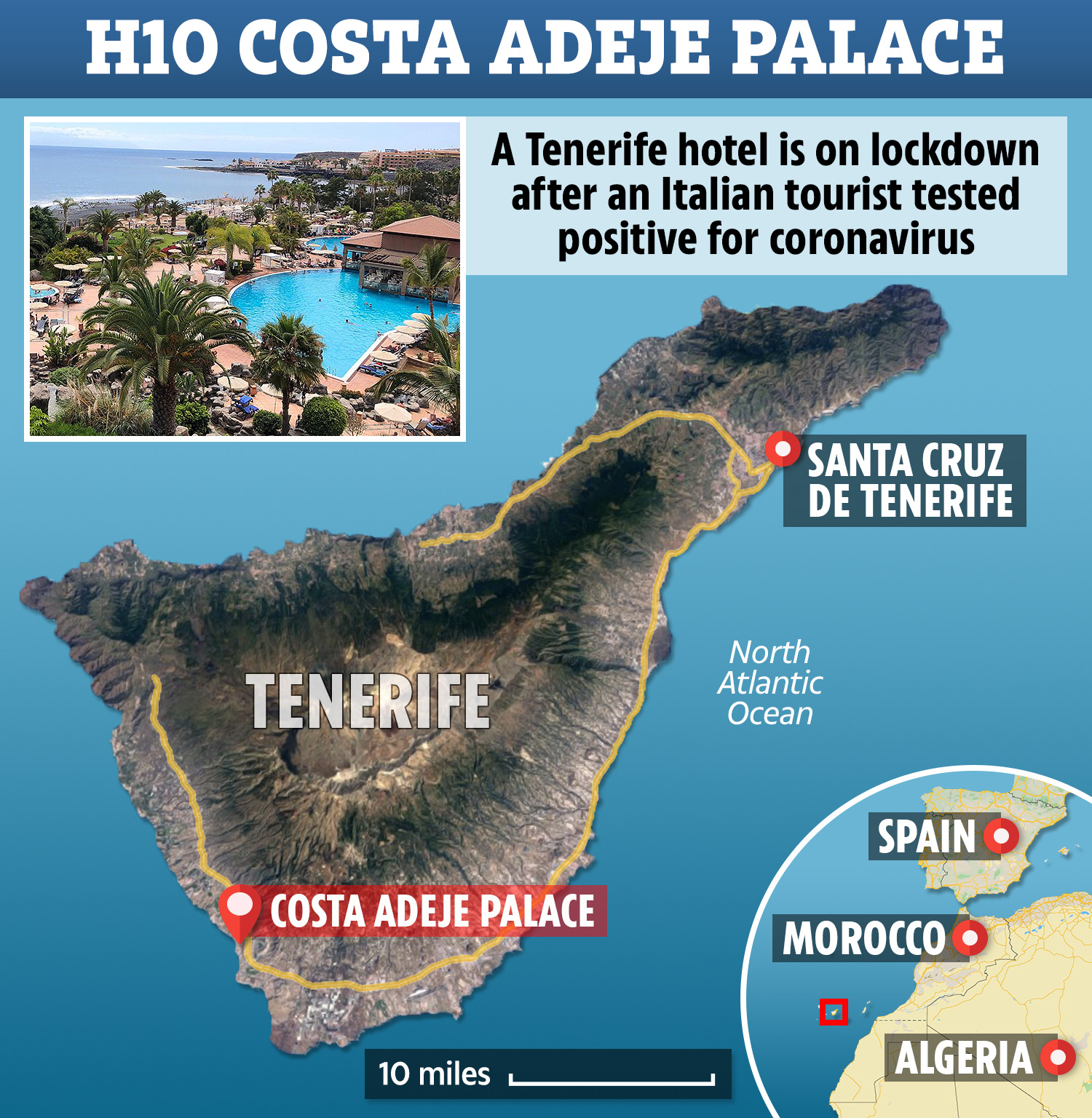 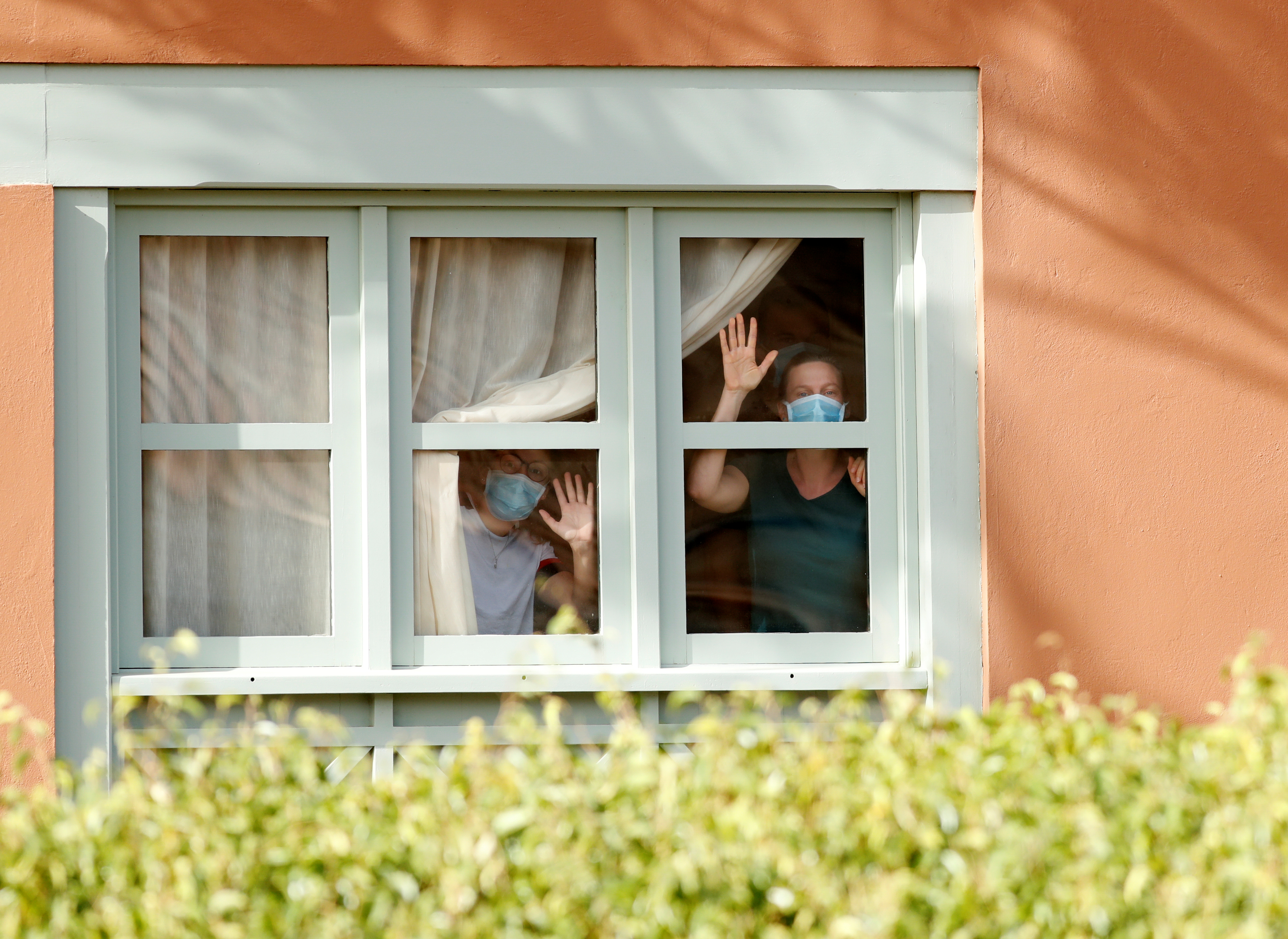 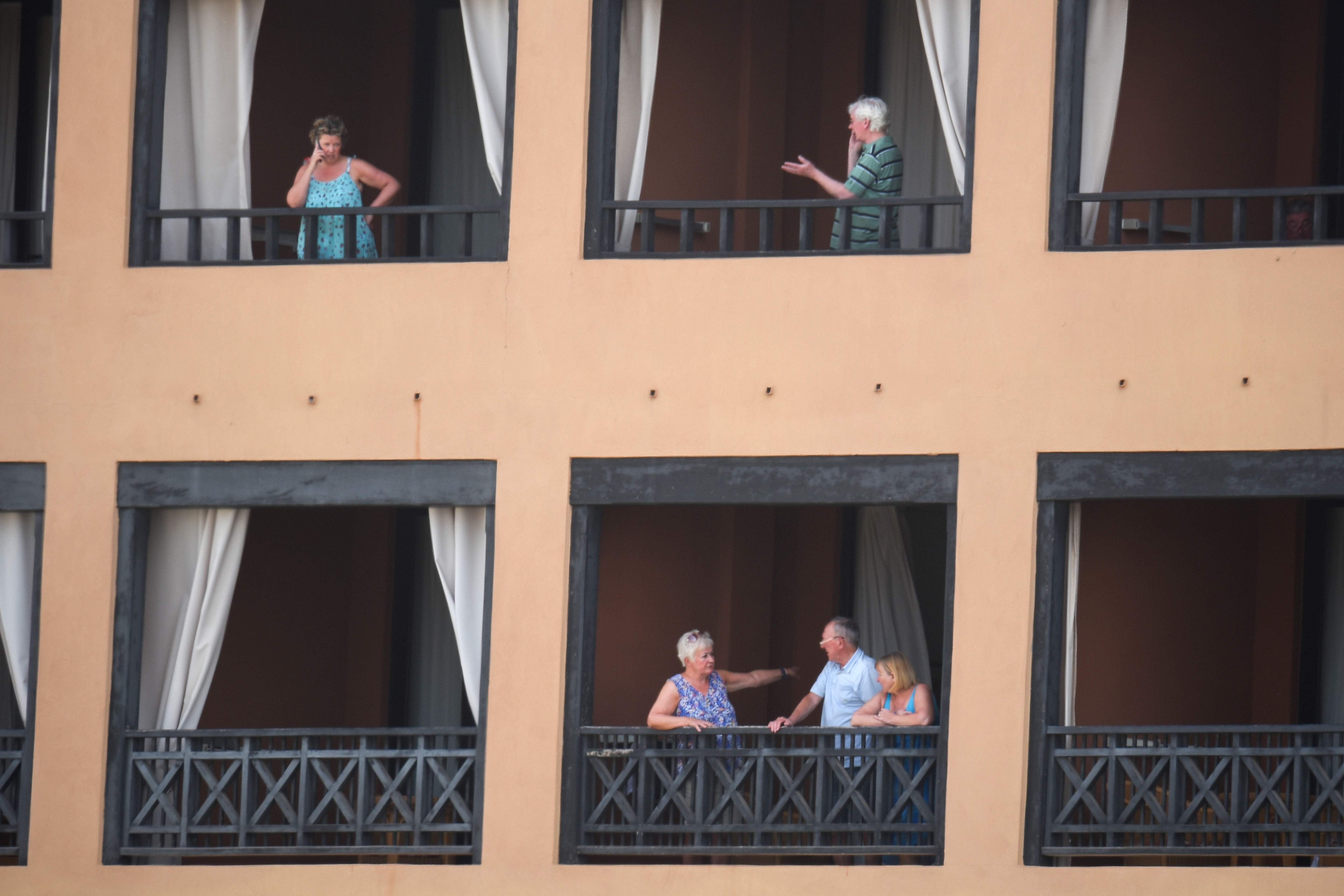 Regional health chiefs have asked the H10 Costa Adeje Palace to hand over a list of names of guests who were at the resort after February 17, after four Italians who have the virus checked in.

Sun Online can exclusively reveal that at least one Brit that has landed back in the UK is now being tested for the bug after suffering from symptoms.

The patient stayed at the hotel on Saturday night after the infected Italian guest arrived but left before any lockdown was put in place.

It is understood the two latest cases, also thought to be Italians, were part of the group of ten holidaymakers the doctor and his wife, who also tested positive, travelled to the island with.

Local reports say that the group travelled with other tourists on a bus to the hotel but later visited a private medical centre after suffering with fever-like symptoms.

The four coronavirus patients are now being treated at a local hospital in Candelaria.

The doctor and his wife are from Italy's Lombardy region – where several people have already died after contracting coronavirus.

It is believed the couple had been at the hotel for seven days.

A spokesman for the regional health authority said: “We can confirm two more positives in Tenerife.

"They're members of the group of Italian nationals that travelled to the island together who were in direct contact with the first two cases." 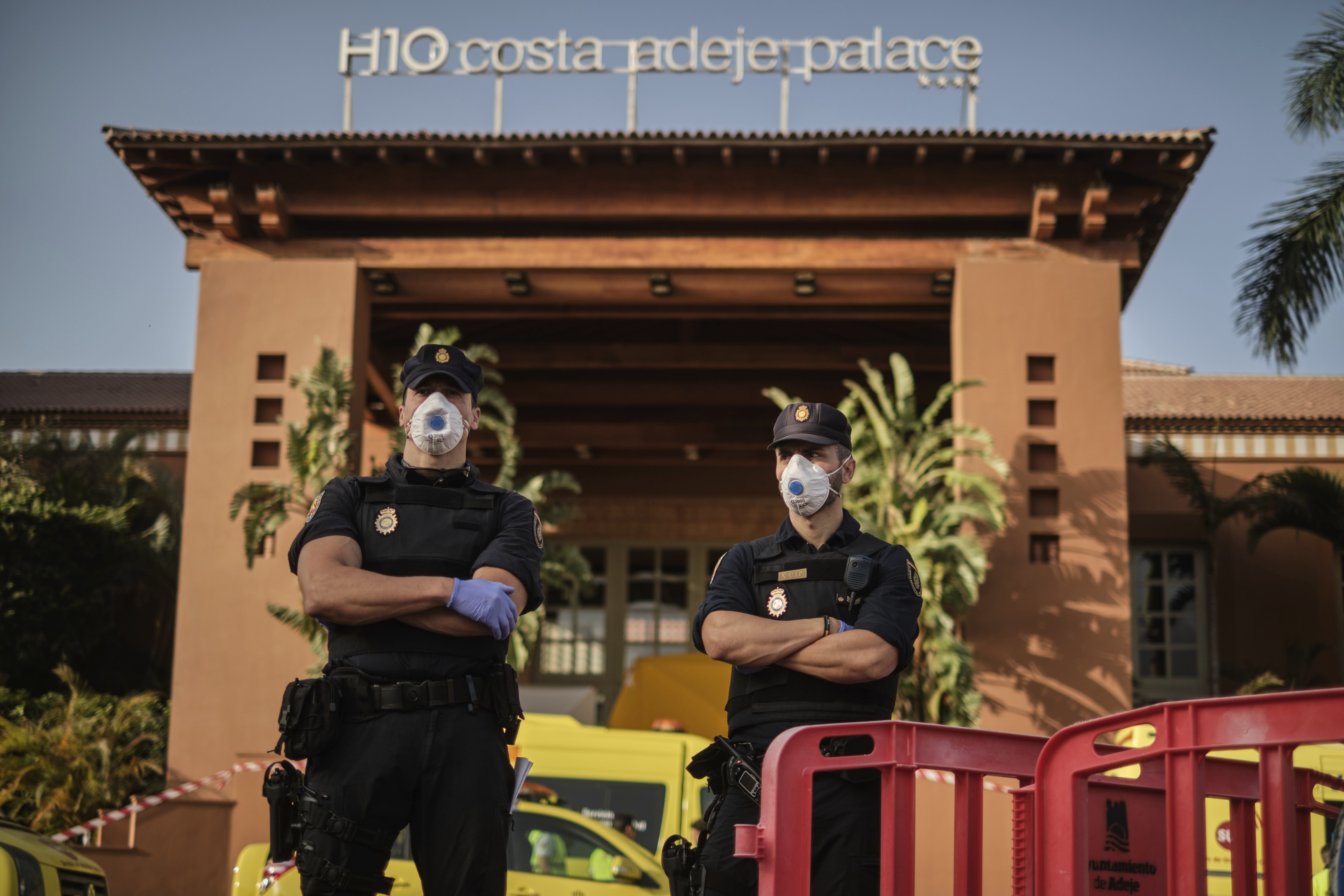 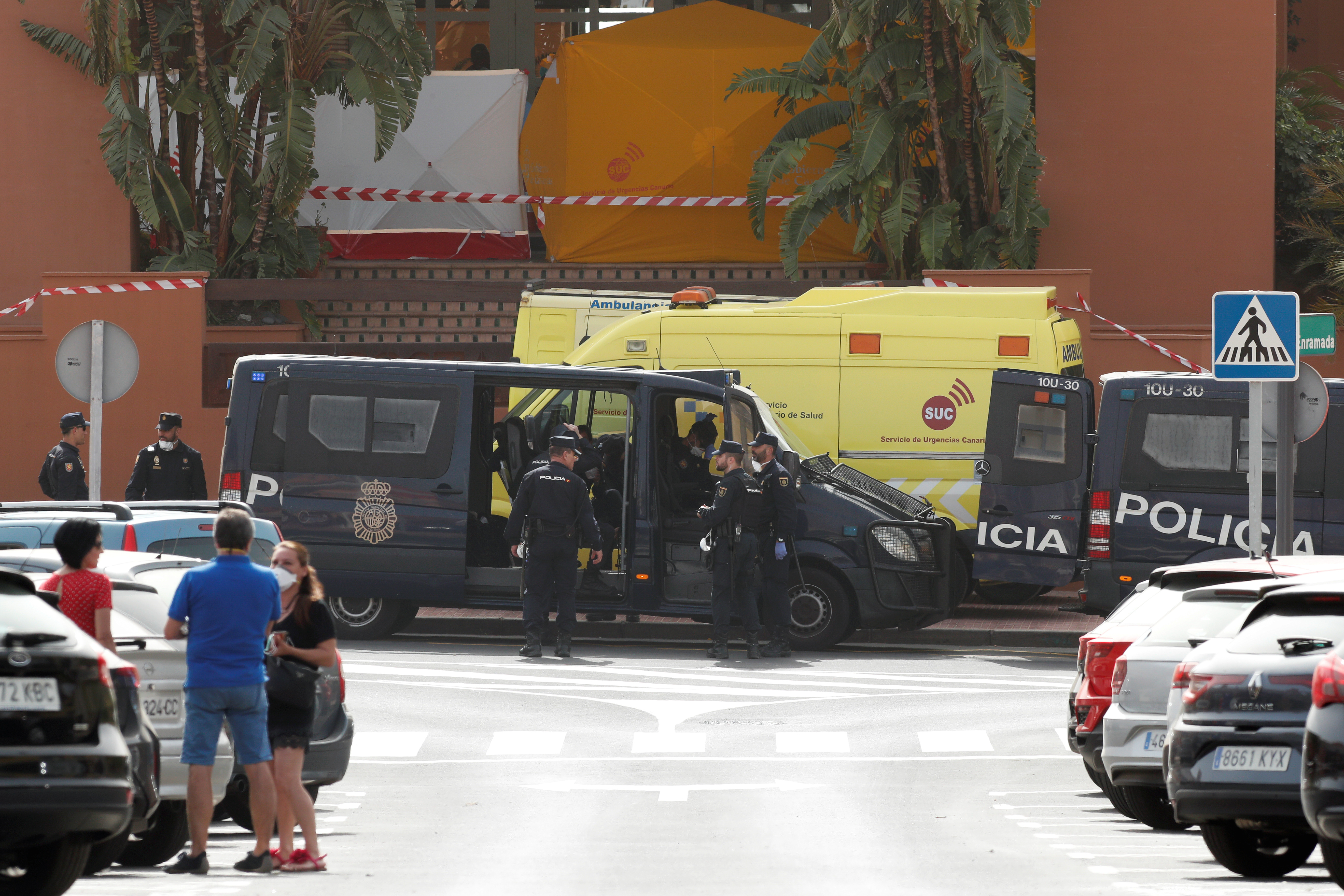