Who knew that Broken Hill is boom town, and why wasn’t I told? When I first got there in early ’81 after hitchhiking all night with an Ampol truckie coming from Dubbo, the joint was rough, remote, insular and definitely on the shocker-ocker side of things. But now look at it!

In the main bar of the iconic Palace Hotel on Wednesday night, as Karaoke was in full swing in the very spot made famous by Priscilla, Queen of the Desert, I was sitting with a well-known writer who will remain nameless – let’s just call him Jack Marx – and his BFF, a fabulous trans woman by the name of Kirsti. All around us, young people, old people, gays, Asian-Australians, family-groups, truckers, miners, grey nomads, trans people and Mad Dog Englishmen competed for the microphone before belting out their favourite show-tunes. 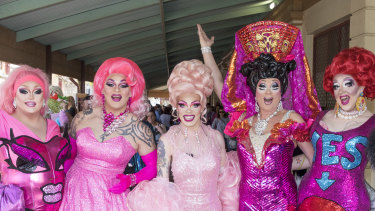 Drag queens from across the country come to Broken Hill’s Broken Heel Festival.

The true star of the show, though, the one that everyone wanted to chat to and buy a drink for? That was a petite Indigenous woman known to one and all as “Aunty Rose”, a local legend who presides as Black Queen of all she surveys. Four decades ago, she wasn’t allowed in that bar, and now look at her …

In fact, as Polk Salad Annie bursts forth, look at them all, swaying, and stomping as they – “polk . . . SALAD” – sing along!

It was as inclusive, as diverse, as colourful and as joyous a mob as I have ever been a part of and the energy of the place extends well beyond that bar.

The local literary and arts communities are flourishing, even as the bars are bursting. In a couple of months, the Mundi Mundi Bash – featuring Paul Kelly and other performers the night before they hold the Mundi Mundie Undie Run to raise funds for the Royal Flying Doctor Service – is already sold out.

The month after that, the Broken Heel Festival, celebrating the theatrical anniversary of Priscilla Queen of the Desert, will see “Drag Queens and Drag Kings representing every corner of Australia’s diverse community”, strutting their stuff.

To the north, the Mutawintji National Park, showing perfectly preserved Indigenous paintings and carvings, is drawing a record number of visitors. They’re only outdone by the Brewarrina fish traps to the east: possibly the oldest human construction in the world, and extraordinary to see up close.

Menindee Lakes are full for the first time in 20 years, but still not quite as full as every caravan park and hotel within cooee, as they all have waiting lists.

You get the drift. The whole place is pumping as, in the age of COVID, Australians are spending their tourist dollars internally instead of externally and word has spread about just how welcoming, progressive and exotic the whole area is with stuff to see and do like nowhere else in the world.

The most wonderful thing though? My mate, Jack, bought a substantial house here for $70K back in 2013. When I asked him how much he thought it might be worth these days, he ruminated for a moment and replied, “Let’s see . . . I’d say about $70K.”

Go West, young man, young woman, and young trans. If Broken Hill is not the most progressive place in the country, it must be running it close. 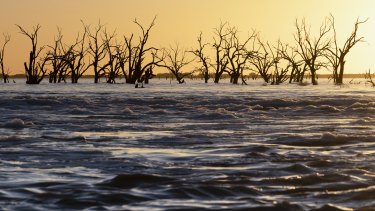 Lake Menindee is is full for the first time in years.Credit:Getty Images

Not for nothing has Parramatta Road long been known as “the varicose vein of Sydney”. Clogged, ugly, unhealthy. These days? It just seems sad, filled with shuttered businesses. The only thing that seems to be prospering along the strip from Camperdown to Summer Hill are massage joints, adult shops and cobwebs. Seriously, driving along that way this week, I was struck by just how little street life there was, how both people and commerce have beaten a coughing retreat as bus and transit lanes have advanced against the claims of parking spots. Ten centimetres from the footpath, there is nowt but roaring traffic. It all just looks so . . . grim! Is that the end, then?

Actually, quite the reverse. If I could buy shares in the Camperdown strip right now, and all places where heavy traffic has killed off life, I would. Why? Because 10 years from now, the heavy sound of roaring will be replaced by the gentle swishing of electric vehicles. It will change everything. Air and noise pollution will fall away to nuttin’ and the peopleoids will make a comeback. Our varicose veins will become healthy arteries, and life will grow once more! You heard it here, first. 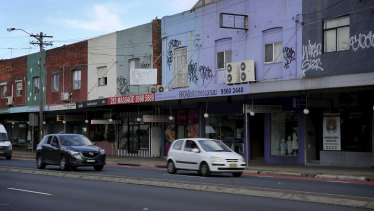 Joke of the Week

At dawn the next day, an 18-wheeler, clearly groaning under the weight, pulls up in the paddock carrying the biggest bull they’ve ever seen, the golden rays of the rising sun making the pointy end of his horns gleam like diamonds. At 2,000 kilos, each step he takes strains the steel ramp.

First Bull: “Ahhhh . . . actually I think I can spare a few cows for our new friend.” Second Bull: “I . . . I have too many cows to take care of. I can spare more than a few.” They look over at the third bull and find him pawing the dirt, shaking his horns and snorting wildly.

First Bull: “Son, don’t be foolish – let him have some of your cows and live to tell about it.” Third Bull: “Hell, he can have all my cows. I’m just making sure he knows I’m a BULL.”

Quotes of the Week

“Today I confirm that I am the leader of the Labor party, that no one has challenged me, no one has asked me to stand aside.” – Jodi McKay on Tuesday after a shocking result for Labor in the Upper Hunter byelection. By Friday she had resigned.

“I actually feel sorry for her. NSW politics is tough.” – Gladys Berejiklian as NSW Labor started discussing how to get rid of Jodi McKay.

“It’s been going on for so long, to the point where they are dying. My dad’s had to go to his grave without any compensation. We got that damn sorry from Kevin Rudd but that didn’t touch most people.” – Sharon McLennan. Since 1994, Ms McLennan has been campaigning for compensation for Stolen Generation survivors in the Northern Territory, including her mother, Irene, 74, and her late father John, and her grandparents, William, and his wife, Agnes.

“Due to the repeated nature of the alleged advertising breaches, the TGA has also issued a directions notice to Mr Evans and his company, to cease advertising therapeutic goods not entered in the ARTG and to discontinue making various claims about therapeutic products.” – A statement from the Therapeutic Goods Administration after it issued infringement notices totalling $79,920 to Peter Evans Chef Pty Ltd. The multiple fines were issued in relation to products including the BioCharger device, hyperbaric oxygen therapy chambers and two oral medicines.

“This underpins PA’s duty of care and the responsibility to do everything in our power to keep each and every team member safe for the duration of our stay in Tokyo and our journey home again.” – A spokesman for Paralympics Australia. All Australians heading to the Tokyo Paralympics will be required to get the COVID-19 vaccine after Paralympics Australia notified athletes and officials the jab would be mandatory for selection.

“We have nothing to show us that Jodi can win us the next election.” – A senior Labor figure as the knives came out for Jodi McKay.

“Izzy suing someone because he believes they’re judging him. Oh, the irony.” – A commenter in the Herald, on the story about Israel Folau and Clive Palmer suing the Queensland Rugby League on the grounds of not allowing him to play in their competition until he commits to not putting up further homophobic posts.

“If Scott Morrison wants to argue that there are federal implications behind a byelection result in one seat in NSW, then he should apply that, I think, to Western Australia and Queensland, which are the big two resource states in this country.” – Anthony Albanese as the federal Liberal Party tried to use the Upper Hunter election as a weapon against the federal Labor Party.

“I hope that this inspires some to just put in that little extra work because, first of all, there’s no reason why you can’t accomplish your goals at an older age. It just takes a little more work.” – Phil Mickelson on becoming the oldest golf masters winner, at 50 years and 11 months.