Pass and moo-ve: Huge longhorn bull plays around with a ball – before accidentally deflating it when he pushes it into a barbed wire fence

This is the adorable moment that a huge bull named Tex accidentally pops a pink yoga ball he was playing with by pushing it into a barbed wire fence.

The footage, filmed in February at a sanctuary near Cleveland, Texas, shows the bull tossing the ball around a field with his 36-inch horns.

It starts with Tex prodding the ball, before he pushes it to his filming keeper, who kicks it further away for him to chase. 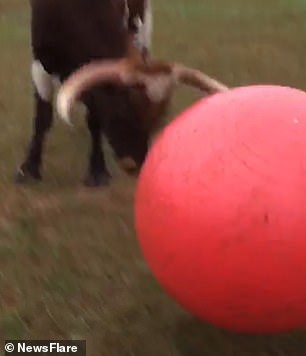 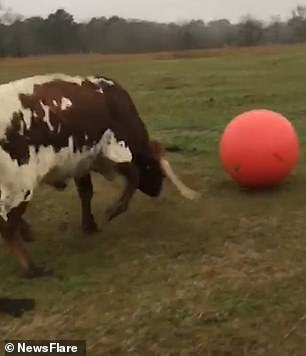 A huge bull named Tex enjoys playing with a pink yoga ball with his 36-inch horns but accidentally deflates it after pushing it into a barbed wire fence. The footage, filmed in February at a sanctuary near Cleveland, Texas, shows his keeper trying to warn him

Tex, who arrived at the Ima Survivor sanctuary in September 2017 after Hurricane Harvey, then begins to charge towards the barbed fence, bringing an early warning from the keeper, who shouts, ‘bring it back to me Tex!’.

But Tex continues to charge towards the fence, prodding the ball in front of him as he does so.

Just before the ball hits the sharp barrier, Tex’s keeper shouts frantically, ‘that is a barbed wire fence… that is a rubber ball, its inflated! 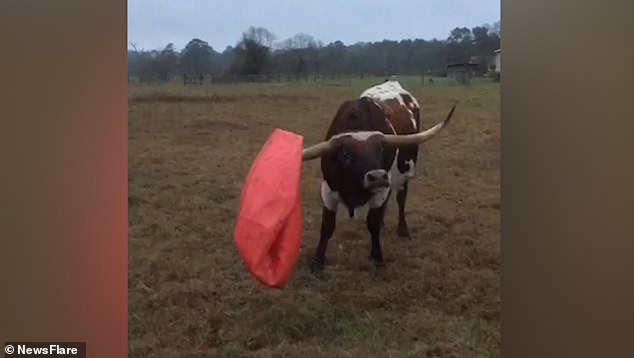 After refusing to heed the warning, Tex looks sadly at the camera as the deflated yoga ball hangs off his horn. The mischievous animal arrived at the Ima Survivor animal sanctuary in September 2017 after Hurricane Harvey

But that does not stop Tex making the fatal final prod, and the ball instantly deflates as it hits the fence.

‘I am so sorry buddy,’ the keeper says sadly, as the lifeless remains of the ball hang off Tex’s horn.

Tex then drops it to the ground and the deflated ball again before quickly turning and running a few steps the other way, with his keeper saying ‘oh no!’