Bull-runner is sent flying through the air at Spanish festival before the rampaging beast gores him and stamps on his head, leaving him badly injured

This is the horrifying moment a man is brutally gored by a bull after trying to outrun it during a Spanish festival.

The 56-year-old was flipped up in the air by the rampaging half-tonne beast, who then skewered and kicked him in the head after falling from metal railings in Benaocaz, Cádiz, at around 5pm on Sunday.

Moments earlier, the man was seen clinging to a window frame to keep himself from danger – before losing his grip at the vital second and falling straight into the bull’s path. 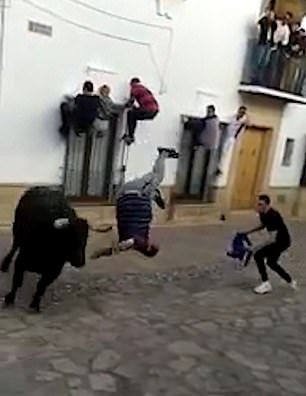 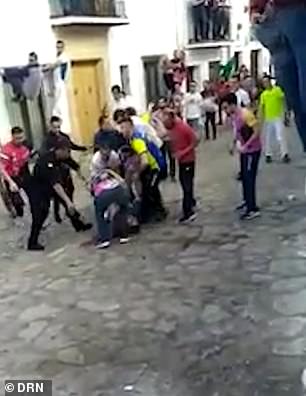 The furious animal then clattered headlong into him and savaged him repeatedly on the ground, as terrified locals tried to save him.

The unnamed man suffered a serious brain injury and a collapsed lung but somehow survived the ferocious attack and remains in a stable condition in hospital, reports Diario de Cádiz.

Graphic footage of the incident filmed by a spectator has since gone viral on social media, gathering tens of thousands of views.

It shows the black bull standing ominously still in the middle of the street before running towards a goading spectator waving a white rag.

The daredevil narrowly sidesteps the oncoming bull, earning applause from the crowd.

But the bull quickly loses interest in the amateur matador and turns its attention to three men hanging perilously from a nearby window railing.

As it tries to drag them down with its horns, the men pull their legs up higher but one man is unable to hold on and slips down.

Landing on his feet, the middle-aged man tries to sprint away from the bull but he is skittled into the air as the panicking crowd shrieks with horror.

The bull then spears him in the head as he lies defenceless on the ground – while spectators rush in to try and save him and distract the animal.

But they scatter as the bull turns to charge at them and it gores the victim again before stamping on his head. 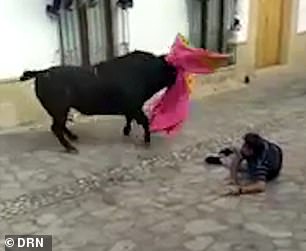 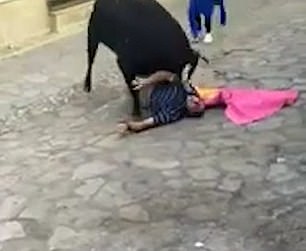 The 56-year-old (left and right) was flipped up in the air by the rampaging half-tonne beast, who then skewered and kicked him in the head

More than a dozen locals eventually manage to carry the man to safety after the bull is lured away down the street.

Spanish media reports suggest the victim’s injuries, although serious, are not life-threatening.

However, viewers on social media had little sympathy for the man.

One called the tradition of bull running a ‘vile pastime’ and called for it to be banned.

A second wrote: ‘Play stupid games, win stupid prizes.’ Another added: ‘A good example for the other morons having fun teasing and torturing animals.’

The village of Benaocaz holds its annual bull run at the festival of San Blas every February in honour of its patron saint. Spain’s most famous bull run takes place at the San Fermin festival in Pamplona, where people from all over the world travel to risk their lives running with the bulls through the city streets.

Last year, eight people were gored and 35 were injured at the festival.

At least 16 people have been killed in bull runs since records began in 1911.