Principal Diana Ellis said houses around the town, 70 kilometres north-west of Melbourne, were being snapped up before they were even officially on the market.

“People are loving this idea of getting your gumboots on and free-ranging,” Mrs Ellis said. 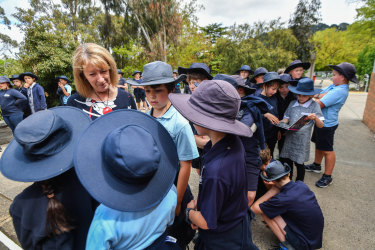 Woodend Primary School principal Diana Ellis says people are “loving this idea of getting your gumboots on and free-ranging.”Credit:Joe Armao

The school is one of many in Victoria’s picturesque towns reporting increased interest from Melburnians looking for a change, and perhaps more space, after months of lockdown.

Susan Ryan, principal of Lisieux Catholic Primary School in Torquay, said COVID-19 had “provided a time for families to reflect on what is important and where they want to raise their families".

“For example, we have one family that has enrolled for next year who relocated temporarily to Torquay just as the virus hit,” she said.

“They trialled living here with a view to considering a permanent move. They were able to work remotely during the lockdown and now their employers have agreed to ongoing work from home situations.”

Dr Ryan said several more newly enrolled families had one parent working in Melbourne but had decided the challenge of the commute was outweighed by the benefits of living moments from school and the sea.

“In most of these cases, the families were familiar with Torquay from their own childhoods or regular summer camping holidays or had the Surf Coast on their plan for the future," she said.

“A few I have spoken with have decided to seize the opportunity while their children are in primary school."

Nearby Torquay P-6 College took on new students from Melbourne during remote learning, and has enrolled a further seven families from the Victorian capital in recent weeks. 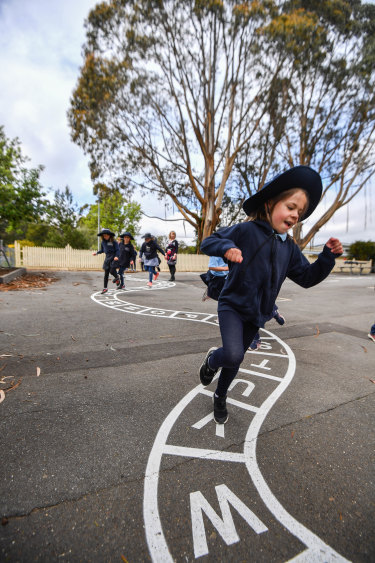 Enrolments at Woodend Primary School have increased 14 per cent over the year. Credit:Joe Armao

Tiffany Holt, principal of Apollo Bay P-12 College, said the school of 295 students on the Great Ocean Road was planning for an increase in enrolments next year.

“We’ve had a number of people who have purchased properties throughout the COVID period, who have been able to move into those properties,” Ms Holt said.

“I’m aware of families who had future plans to move here and have decided to fast forward them.”

But the flow of people has not been one way, with the dearth of tourists due to travel restrictions forcing some families to leave their community in search of work.

“Some families have had to move, just because in coastal areas their employment requires tourism,” Ms Holt said.

Kate Campbell and Simon Holt have a good life in Hawthorn, but after going through lockdown in Shoreham have decided to make the move.

"We'd always talked about living there and sending the kids [to school] and every summer we would say, 'Wouldn't it be so nice'?" Ms Campbell said. "So while we were down there we thought, let's just do it."

"The idea of going for a swim before or after school at the beach, I just love it," she said.

An Ipsos poll commissioned by The Age found that a quarter of Melburnians were contemplating a move to either the country or interstate.

Julie Podbury, president of the Australian Principals Federation, said while she hadn’t heard of a widespread shift from Melbourne to the regions, there was logic to it.

“People have been freed from the shackles of the city,” she said.

Macedon Primary School said while there had been a higher than usual number of inquiries from Melbourne families, there was not much housing available in the town.

Andy Kozak, principal of New Gisborne Primary School, said principals in the area were reporting only minor increases in inquiries from Melbourne families.