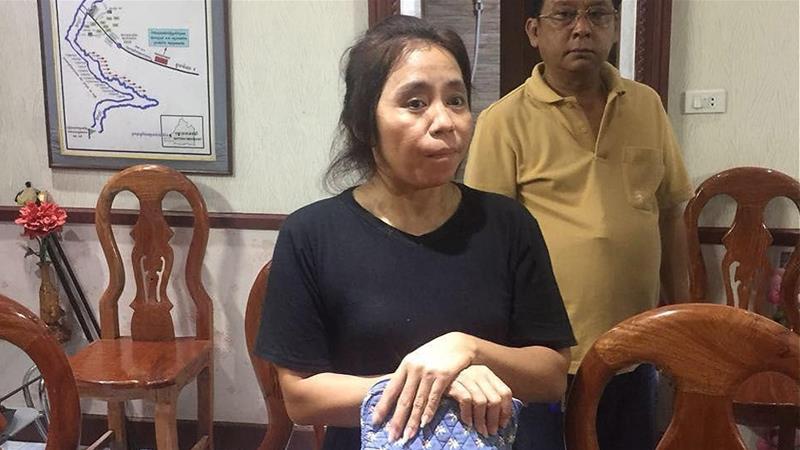 Human rights groups have condemned Thailand for deporting a Cambodian woman who fled her country to avoid prosecution after a video shared on social media showed her throwing a shoe at an image of Prime Minister Hun Sen.

Sam Sokha was forcibly returned to Cambodia on Thursday after a Thai court found her guilty of overstaying her visa, according to Amnesty International.

She fled to Thailand last year, where she was given refugee status by the UN refugee agency (UNHCR), after Cambodian police launched an investigation into the video clip that was posted on Facebook.

“This person, when will he stop destroying the nation?” she is heard saying in the video, referring to Hun Sen, who has been in power for more than 30 years.

Cambodian prosecutors later pressed charges of “insulting a public official” and “incitement to discriminate” against her and issued a warrant.

On Friday, the Phnom Penh Post, citing pro-government Fresh News, said a court in the southern Kampong Speu province convicted Sokha in absentia last month and sentenced her to two years in jail.

Upon her arrival from Thailand, she was apprehended by Cambodian police and transferred to a prison in Kampong Speu, Olof Blomqvist, a spokesman for Amnesty, told Al Jazeera on Saturday.

“These charges are completely baseless and only related to her peaceful activism,” said Blomqvist.

“It is staggering that someone can face prison time for nothing but throwing a shoe at a poster.”

Sokha’s deportation violated the customary principle of international law that prohibits the return of anyone to a place where they could be persecuted, tortured or face other human rights violations, he added.

Thailand, which hosts more than 100,000 refugees, is not party to the international convention on refugees and treats any refugee living outside of designated camps on the Thai border with Myanmar as an undocumented immigrant.

The move against Sokha comes amid a sweeping crackdown on dissent in Cambodia.

Authorities in Cambodia have arrested opposition leader Kem Sokha on charges of “treason and espionage” and shuttered several media outlets seen as critical of the government.

The clampdown has forced several opposition members of parliament into exile, with many seeking refuge in Thailand.

Brad Adams, Asia director for Human Rights Watch, on Friday said Thai authorities had deported Sokha despite knowing that Western embassies and the UNHCR were trying to resettle her in a third country.

“Thailand’s friends should formally and publicly complain about this shocking act of sending a refugee back to a country where she will face near-certain persecution,” Adams said in a statement.

“This case sets a worrisome precedent for how Thailand will treat the many other refugees currently on its soil.”

Adams also urged the UN to press Cambodia to release Sam Sokha and allow her to travel to a safe country.

Thailand, in recent years, has forcibly returned more than 100 refugees and asylum seekers based on the requests of foreign governments.