Washington: The House committee investigating the January 6 attack on the US Capitol is scrutinising a 38-page PowerPoint document filled with extreme plans to overturn the 2020 election. It was provided by Mark Meadows, the last chief of staff to president Donald Trump.

The document recommended that Trump declare a national emergency to delay the certification of the election results and included a claim that China and Venezuela had obtained control over the voting infrastructure in a majority of states.

A lawyer for Meadows, George Terwilliger, said Meadows provided the document to the committee because he merely received it by email in his inbox and did nothing with it. 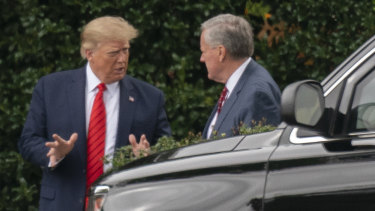 Then US president Donald Trump and his White House chief of staff Mark Meadows, right, talk outside the Oval Office last year.Credit:AP

“We produced the document because it wasn’t privileged,” Terwilliger said.

Phil Waldron, a retired Army colonel and an influential voice in the movement to challenge the election, said on Saturday (AEDT) from a bar he owns outside Austin, Texas, that he had circulated the document — titled “Election Fraud, Foreign Interference & Options for 6 JAN” — among Trump’s allies and on Capitol Hill before the attack. Waldron said that he did not personally send the document to Meadows, but that it was possible someone on his team had passed it along. 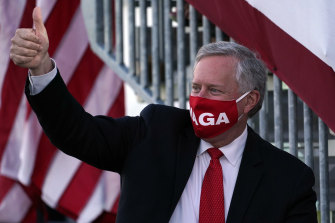 It is unclear who prepared the PowerPoint presentation, but it is similar to a 36-page document available online, and it appears to be based on the theories of Jovan Hutton Pulitzer, a Texas entrepreneur and self-described inventor who has appeared with Waldron on podcasts discussing election fraud.

On January 4, members of Waldron’s team — he did not identify them — spoke to a group of senators and briefed them on the allegations of supposed election fraud contained in the document, Waldron said. The following day, he said, he personally briefed a small group of House members; the discussion focused on baseless claims of foreign interference in the election. He said he made the document available to the lawmakers.

Waldron said he was not surprised that Meadows had received a version of the document, which exists in varied forms on internet sites.

“He would have gotten a copy for situational awareness for what was being briefed on the Hill at the time,” Waldron said.

Meadows is not known to have worked directly with Waldron, who has described his military background as involving “information warfare”. However, Rudy Giuliani, Trump’s personal lawyer as he fought to stay in power, has cited Waldron as a source of information for his legal campaign.

Meadows remains in a legal battle with the January 6 committee, which is proceeding with holding him in criminal contempt of Congress for refusing to appear for a scheduled deposition or to turn over documents he believes could violate Trump’s assertions of executive privilege. Trump has filed suit claiming he still has the power to keep White House documents secret, an assertion several courts have rejected, though the case appears headed for the Supreme Court.

Meadows has responded by filing suit in an attempt to persuade a federal judge to block the committee’s subpoenas. His lawsuit accuses the committee of issuing “two overly broad and unduly burdensome subpoenas” against him, including one sent to Verizon for his phone and text-message data.

Democrat Bennie Thompson, chairman of the committee, has cited the 38-page PowerPoint document as among the reasons he wants to question Meadows under oath.

Before coming to loggerheads with the panel, Meadows had provided some useful information to the committee, including a November email that discussed appointing an alternate slate of electors to keep Trump in power and a January 5 message about putting the National Guard on standby. Meadows also turned over his text messages with a member of Congress in which the lawmaker acknowledged that a plan to object to Joe Biden’s victory would be “highly controversial”, to which Meadows responded, “I love it”.

Meadows also informed the committee that he had turned in the mobile phone he used on January 6 to his service provider and that he was withholding some 1000 text messages connected with the device.

In December, after Pulitzer testified before the Georgia state Senate and claimed to have “hacked” the state’s voting system, Georgia’s Secretary of State issued a news release calling him a “failed treasure hunter” who had “provided no evidence”.

Pulitzer did not respond to a request for comment.

Waldron was featured in a film by Mike Lindell, the embattled CEO of MyPillow who helped finance Trump’s efforts to challenge the election results. In the film, Waldron pushed the unfounded claim that the Chinese government had access to files and data through voting machines. He also claimed that overseas servers in Germany, Spain and Britain somehow played a role in manipulating results.

Even though Meadows did not appear to act on the PowerPoint, he did take action to pursue other baseless claims of voter fraud.

In five emails sent in late December and early January, Meadows asked Jeffrey Rosen, then the acting attorney-general, to examine debunked claims of election fraud in New Mexico and an array of wild conspiracies that held that Trump had been the actual winner of the election, according to emails provided to Congress.

The emails included a fantastical theory that people in Italy had used military technology and satellites to remotely tamper with voting machines in the United States and switch votes for Trump to votes for Biden.

Rosen did not agree to open the investigations suggested by Meadows. He also refused to broker a meeting between the FBI and a man who had posted videos online promoting the Italy conspiracy theory, known as Italygate.