Why ‘long Covid’ may not actually be to blame for fatigue in children: Tell-tale symptoms are JUST as common in youngsters who’ve never had the virus, official data shows

Long Covid could be being drastically overreported in children, an official report suggests.

The Office for National Statistics said only one in 100 primary-aged pupils actually have the condition, despite half of parents reporting at least one of its symptoms.

Professor Russell Viner, a member of SAGE and child health expert, said it showed ‘just how common tiredness and headaches are in children’.

The report showed that 47.5 per cent of parents said their child was still battling at least one symptom of the virus 12 weeks later.

But almost the same amount (46.6 per cent) had similar symptoms despite never having Covid. Most common symptoms were a sore throat, lost voice, coughs and shortness of breath.

The ONS estimated that fewer than one in 40 secondary pupils  in the UK have long Covid. 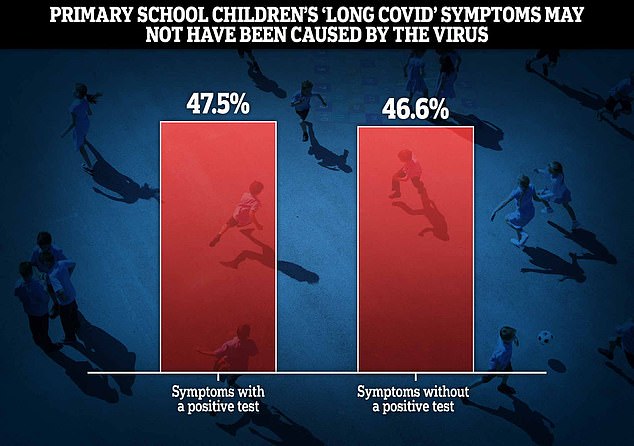 Graph shows: 47.5 per cent of parents said their child experienced one or more symptoms of the virus at least 12 weeks after a positive test between March 2020 and December 2021 in England. But 46.6 per cent also claimed their children had the same symptoms even if they did not have an official Covid case. 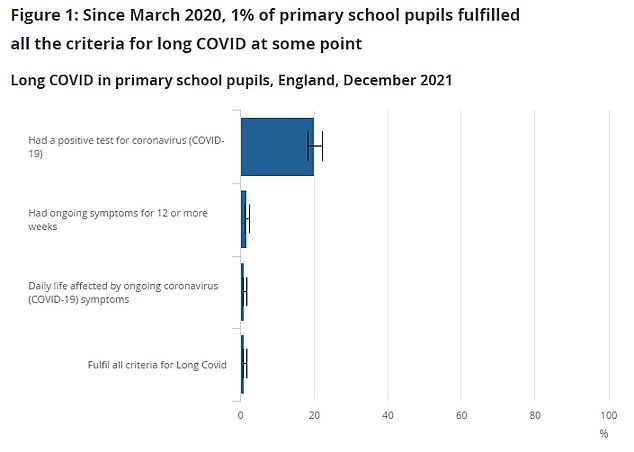 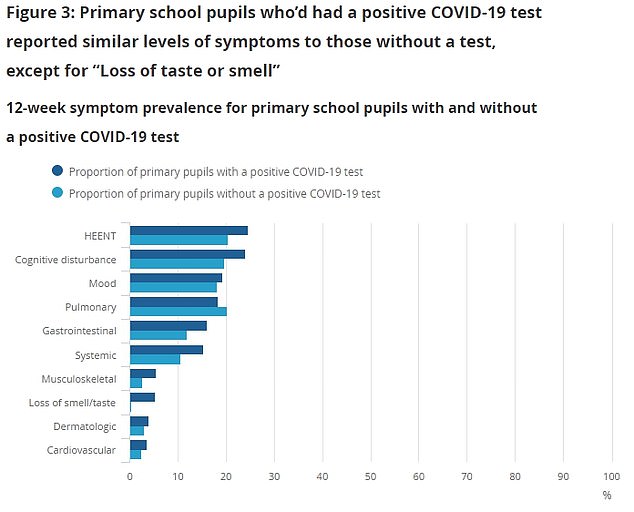 Primary school children were more likely to experience head, eyes, ears, nose, and throat (HEENT) symptoms (21 per cent) — including sore throat, lost voice or earache — regardless of a positive test. A quarter of those testing positive had the symptoms compared to a fifth in those who did not. It was followed by ‘cognitive disturbance — trouble sleeping, headaches and memory loss — (21 per cent) and pulmonary symptoms — coughs or shortness of breath — (20 per cent) 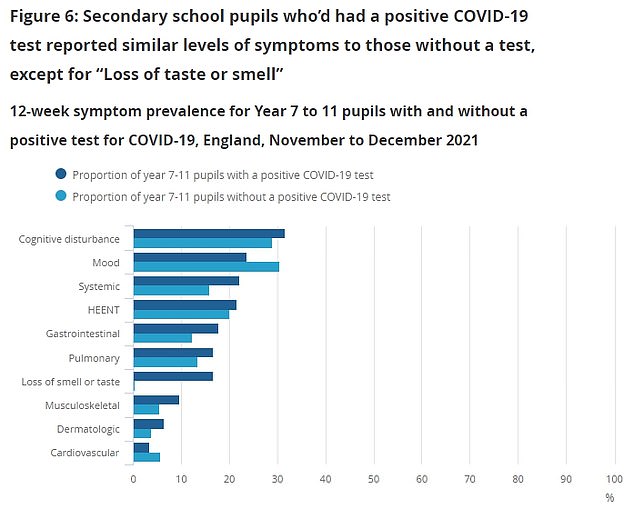 Reacting to the findings, Professor Viner, former chair of the Royal College of Paediatrics and Child Health, said: ‘These data emphasise just how common symptoms such as tiredness or headaches are in children and teenagers, regardless of whether they had Covid-19 or not.

‘They found that almost all these symptoms occurred as frequently in those who had never had a positive test compared with those who had.

‘Covid toes’ may actually be caused by not wearing socks, experts claim

‘Covid toes’ may actually have nothing to do with the virus, experts now believe.

Throughout the pandemic, there have been reports of infected patients suffering from chilblains — redness and swelling on their feet.

Some experts believed the condition was brought on by the body’s immune system being weakened by the virus.

But Yale University scientists now say the condition may have been caused by people not wearing socks while working from home.

The study, published in PNAS, looked at 23 people claiming to have Covid toes but found only three actually caught the virus beforehand.

While the authors could not rule out an immune response to Covid as a cause, they said there were other explanations for the increased trend, including not wearing socks.

Chilblains are usually caused by prolonged exposure to cold or damp air.

They said: ‘An increased incidence of chilblains has been observed during the pandemic and attributed to viral infection.

‘Our results do not support Covid as the cause of the increased chilblain incidence.’

‘These findings make it clear that research that simply counts issues or symptoms in those who have had Covid or those who haven’t overstates the extent of major problems after infection.’

Long Covid is a poorly understood condition, which has seen survivors complain of fatigue, breathing difficulties and problems concentrating.

Experts have previously cast doubt over long Covid estimates because headaches and fatigue are so common.

The report found only 1 per cent of under-11s met the clinical definition for the condition – a positive test, continuous symptoms for at least 12 weeks and everyday life impacted by those symptoms.

Yet a total of 57.6 per cent of children who were diagnosed with Covid reported lingering symptoms 12 weeks after their case.

This was only slightly higher than the  49.5 per cent who reported a common symptom despite never testing positive.

Despite the rates of symptoms being similar in those who tested positive and those who did not, rates of long Covid were significantly higher in children who already suffered with a mental disorder.

Thirty per cent of primary school children with mental disorders reported long Covid symptoms, compared to 7.7 per cent of those without.

Professor Viner  added: ‘We have always known there is a small group of children and teenagers in whom persistent problems after Covid affect them considerably.

‘Although there’s been a lot of debate about the size of this group.

‘These data are very helpful in confirming this appears to be a reassuringly small group.’

He added it was ‘consistent with recent studies by the ONS and others that showed the vast majority of children recover well post Covid.’

Dr Shamez Ladhani, consultant paediatrician at the UK Health Security Agency and study chief investigator, said: ‘It is reassuring that the vast majority of primary and secondary school aged children surveyed since March 2020 have not experienced long Covid symptoms.

‘These new data should be reassuring for parents, clinicians and policy-makers.

‘Not surprisingly, the study also highlights that some primary and secondary school aged children have described symptoms of emotional, behavioural or hyperactivity conditions.

‘As these findings show that children are at much less at risk of complications from Covid-19 than adults, keeping children in school — where mental health support is available — therefore remains vital.’