A chilli thief was caught red handed after a doorbell camera captured her robbing a couple’s plant of its produce.

In the surveillance video a senior woman is seen speedily picking chillies off the bush just outside the home of Laura Murphy, 29, and Michael James, 32, in Melbourne on April 13.

Ms Murphy, a project manager, had been working at home when she was alerted to movement outside of her property by the smart doorbell.

Rushing to the front door Ms Murphy apprehended the thief politely asking her ‘Excuse me can you not come and steal from our house?’

Mr James, a radio producer who also lives at the home said: ‘My partner Laura was working from home and jumped out of a zoom meeting when she got a notification that someone was in the front courtyard.’

The couple said they didn’t know the thief but would have been happy to spare a few chillies if she had only asked.

Mr James said he had been watching the ‘whole thing unfold from my office via the livestream’.

He added: ‘My first thought was “that is some of the fastest and most efficient chilli picking I have ever seen in my life”. 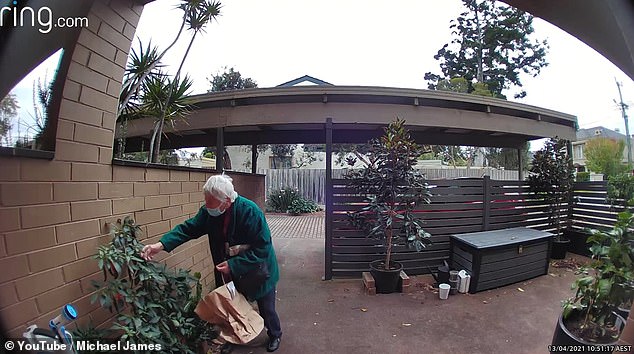 The senior woman is seen helping herself to chillies of the plant outside the home of Laura Murphy, 29, and Michael James, 32, in Melbourne on April 13 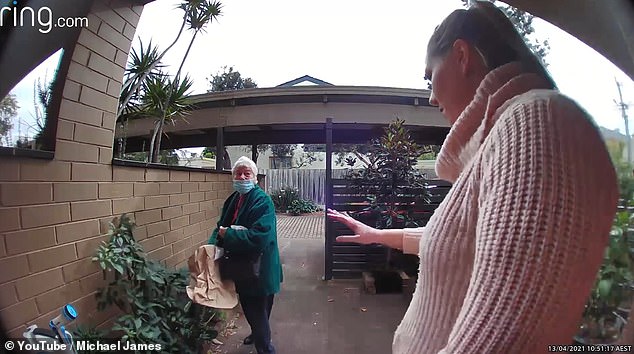 Rushing to the front door Ms Murphy apprehended the thief politely asking her ‘Excuse me can you not come and steal from our house?’ 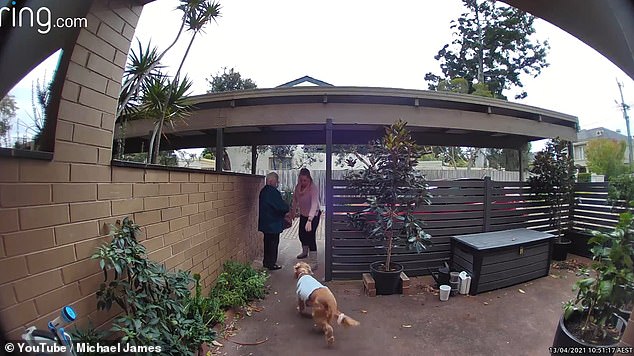 Ms Murphy then asked that her chillies be returned to her, at which point the thief hands back a bag with the produce inside

The woman had also picked some basil from the couple’s garden, which is not seen on camera.

Ms Murphy can be heard telling the woman: ‘Can you give me back those chillies and the basil? That is my property.’

The couple’s dog then comes out of the property to see what is going on, but does not appear to sense a threat as he gives the visitor a warm welcome with a wagging tail.

After confronting the women she hands over a paper bag back to Ms Murphy with the produce from her garden inside.