China has played leading role in spreading conspiracies about COVID-19 originating from other countries, investigation finds

China took the lead in spreading foreign disinformation about COVID-19’s origins, a new investigation has found.

Among powerful forces around the world, Beijing’s propaganda machines played a key role in churning out conspiracies about the coronavirus originating from other countries, according to a nine-month investigation by Associated Press.

Leading media and officials in Russia, Iran and the US – including Donald Trump – also ramped up politically motivated false claims in a global race to control the narrative about where the virus came from, the report said. 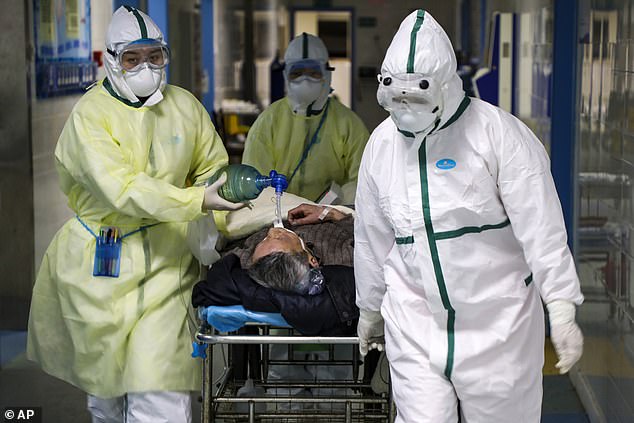 China took the lead in spreading foreign disinformation about COVID-19’s origins, a new investigation has found. In this file photo taken on February 6, 2020,  medical workers transfer a coronavirus patient in the isolation ward at a hospital in Wuhan, Hubei province

It took just three months for the rumour that COVID-19 was engineered as a bioweapon to spread from the fringes of the Chinese internet and take root in millions of people´s minds.

By March 2020, belief that the virus had been human-made and possibly weaponised was widespread, multiple surveys indicated.

The Pew Research Center found, for example, that one in three Americans believed the new coronavirus had been created in a lab; one in four thought it had been engineered intentionally.

This chaos was, at least in part, manufactured, according to a nine-month Associated Press investigation of state-sponsored disinformation conducted in collaboration with the Atlantic Council’s Digital Forensic Research Lab.

Powerful forces, from Beijing and Washington to Moscow and Tehran, have battled to control the narrative about where the virus came from.

As the pandemic swept the world, it was China that took the lead in spreading foreign disinformation about COVID-19’s origins. 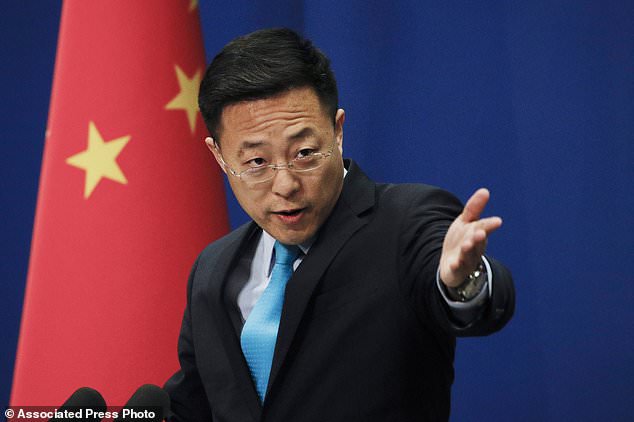 FILE – Chinese Foreign Ministry spokesman Zhao Lijian speaks during a daily briefing at the Ministry of Foreign Affairs office in Beijing on February 24, 2020. Zhao has repeatedly suggested on Twitter that the coronavirus might have come from the US Army 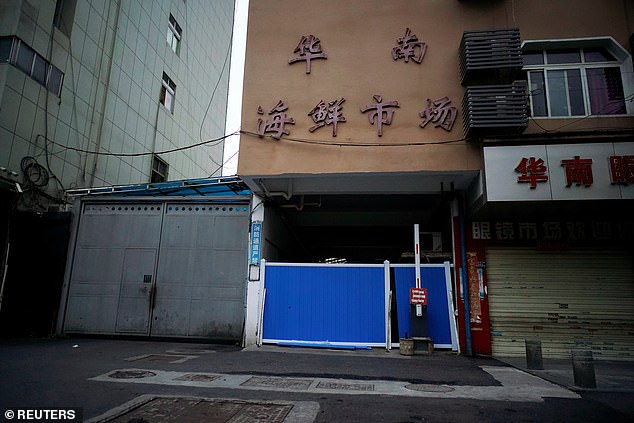 Most of the first cases recorded in Wuhan at the beginning of the pandemic were associated with the Huanan Seafood Wholesale Market, seen in a picture taken on March 20, 2020

Coronavirus DID start in China and ‘exploded’ at a Wuhan wet market after spreading from bats – despite Beijing’s claim it could have arrived on frozen Australian beef, WHO scientist says

The coronavirus pandemic started in China and ‘exploded’ at the Huanan Seafood Market in Wuhan, an Australian scientist investigating the origins of the pandemic claims.

Professor Dominic Dwyer was one of 14 scientists who travelled to China over the past month in a World Health Organisation investigation into the virus that has killed 2.3 million people around the world.

On Tuesday many were shocked to hear the leader of the WHO team, Peter Embarek, echo Communist Party’s assertions that frozen food imports, such as Australian beef, could have led to the initial outbreak.

However, Prof Dwyer, a microbiologist and infectious diseases expert, broke ranks with those claims, saying the source of the virus was most likely bats as previously suspected.

‘The evidence for it starting elsewhere in the world is actually very limited. There is some evidence but it’s not really very good,’ he told Nine News.

‘Now these bats don’t respect borders of course so they are present not just in China but in other parts on South East Asia and indeed elsewhere around the world.’

From bats the contagion probably transferred to an intermediate animal such as a pangolin or a cat – which are sold at the traditional Chinese exotic animal ‘wet markets’ as food.

Leading officials and allied media in all four countries functioned as super-spreaders of disinformation, using their stature to sow doubt and amplify politically expedient conspiracies already in circulation.

The analysis was based on a review of millions of social media postings and articles on Twitter, Facebook, VK, Weibo, WeChat, YouTube, Telegram, and other platforms.

Beijing was reacting to weeks of fiery rhetoric from leading U.S. Republicans, including then-President Donald Trump, who sought to rebrand COVID-19 as ‘the China virus.’

China’s Ministry of Foreign Affairs says Beijing has worked to promote friendship and serve facts, while defending itself against hostile forces seeking to politicise the pandemic.

‘All parties should firmly say ‘no’ to the dissemination of disinformation,’ the ministry said in a statement to AP, but added, ‘In the face of trumped-up charges, it is justified and proper to bust lies and clarify rumours by setting out the facts.’

The day after the World Health Organization designated the COVID-19 outbreak a pandemic, Zhao Lijian, a spokesman for China’s Ministry of Foreign Affairs (MOFA), shot off a series of late-night tweets that launched what may be the party’s first truly global digital experiment with overt disinformation.

Chinese diplomats have only recently mobilised on Western social media platforms, more than tripling their Twitter accounts and more than doubling their Facebook accounts since late 2019. Both platforms are banned in China.

‘When did patient zero begin in US?’ Zhao tweeted on March 12. ‘How many people are infected? What are the names of the hospitals? It might be US army who brought the epidemic to Wuhan. Be transparent! Make public your data! US owe (sic) us an explanation!’

What happened next showcases the power of China’s global messaging machine.

On Twitter alone, Zhao’s aggressive spray of 11 tweets on March 12 and 13 was cited over 99,000 times over the next six weeks, in at least 54 languages, according to analysis conducted by DFRLab.

The accounts that referenced him had nearly 275 million followers on Twitter – a number that almost certainly includes duplicate followers and does not distinguish fake accounts. 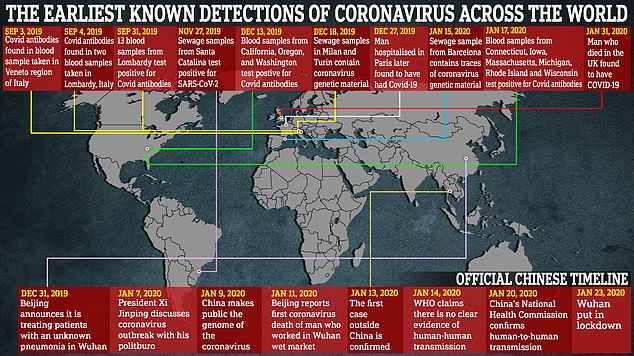 Multiple countries have uncovered evidence that the virus was circulating months earlier than originally thought. While Beijing has tried to insist this proves the virus originated elsewhere, most scientists still think China was the origin – raising the prospect that communist officials simply hid evidence of the early spread

China’s Global Times and at least 30 Chinese diplomatic accounts, from France to Panama, rushed in to support Zhao.

His accusations got uncritical treatment in Russian and Iranian state media and shot back through QAnon discussion boards. But his biggest audience, by far, lay within China itself – despite the fact that Twitter is banned there.

Popular hashtags about his tweet-storm were viewed 314 million times on the Chinese social media platform Weibo, which does not distinguish unique views.

Late on the night of March 13, Zhao posted a message of gratitude on his personal Weibo: ‘Thank you for your support to me, let us work hard for the motherland !’ 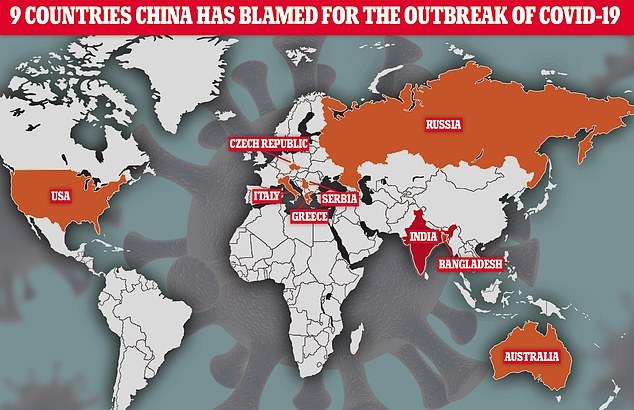 Chinese scientists and officials have been keen to point the finger of blame outside their own borders – variously suggesting that the virus could have originated in Bangladesh, the US, Greece, Australia, India, Italy, Czech Republic, Russia or Serbia

China leaned on Russian disinformation strategy and infrastructure, turning to an established network of Kremlin proxies to seed and spread messaging.

In January, Russian state media were the first to legitimise the theory that the US engineered the virus as a weapon. Russian politicians soon joined the chorus.

‘One was amplifying the other… How much it was command controlled, how much it was opportunistic, it was hard to tell,’ said Janis Sarts, director of the NATO Strategic Communications Centre of Excellence, based in Riga, Latvia.

Iran also jumped in. The same day Zhao tweeted that the virus might have come from the US Army, Iran´s Supreme Leader, Ayatollah Ali Khamenei announced COVID-19 could be the result of a biological attack. He would later cite that conspiracy to justify refusing COVID-19 aid from the US

‘Did the U.S. government intentionally conceal the reality of COVID-19 with the flu?’ asked a suggestive op-ed in Mandarin published by China Radio International on March 22.

‘Why was the U.S. Army Medical Research Institute of Infectious Diseases at Ft. Detrick in Maryland, the largest biochemical testing base, shut down in July 2019?’

Within days, versions of the piece appeared more than 350 times in Chinese state outlets, mostly in Mandarin, but also around the world in English, French, Italian, Portuguese, Spanish and Arabic, AP found.

China’s Embassy in France promoted the story on Twitter and Facebook. It appeared on YouTube, Weibo, WeChat and a host of Chinese video platforms, including Haokan, Xigua, Baijiahao, Bilibili, iQIYI, Kuaishou and Youku.

A seven-second version set to driving music appeared on Douyin, the Chinese version of TikTok.

‘Clearly pushing these kinds of conspiracy theories, disinformation, does not usually result in any negative consequences for them,’ said Mareike Ohlberg, a senior fellow in the Asia Program of the German Marshall Fund.

In April, Russia and Iran largely dropped the bioweapon conspiracy in their overt messaging.

China, however, has carried on.

In January, as a team from the World Health Organization poured through records in China to try to pinpoint the origins of the virus, MOFA spokeswoman Hua Chunying urged the US to ‘open the biological lab at Fort Detrick, give more transparency to issues like its 200-plus overseas bio-labs, invite WHO experts to conduct origin-tracing in the United States.’

Her remarks went viral in China.

China’s Ministry of Foreign Affairs told AP it resolutely opposes spreading conspiracy theories. ‘We have not done it before and will not do it in the future,’ the ministry said in a statement.

Dec 8, 2019 – Earliest date that China has acknowledged an infection

Nov 10 – Milanese woman has a skin biopsy, producing a sample which later shows signs of the virus

Dec 1 – Chinese researchers report an infection on this date in a peer-reviewed study, but it has not been acknowledged by Beijing