Washington:  The Pentagon said a recent Chinese missile launch in the South China Sea was "disturbing" and contrary to Chinese pledges that it would not militarise the disputed waterway.

The South China Sea is one of a growing number of flash-points in the US-China relationship, which include a trade war, US sanctions and Taiwan. 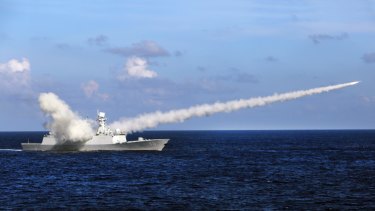 The Chinese missile frigate Yuncheng launches an anti-ship missile during a military exercise in the waters near south China’s Paracel Islands last year.Credit:Xinhua/AP

China and the United States have repeatedly traded barbs in the past over what Washington says is Beijing's militarisation of the South China Sea by building military installations on artificial islands and reefs.

A US official, speaking on the condition of anonymity, said on Tuesday that China tested multiple anti-ship ballistic missiles over the weekend.

"Of course the Pentagon was aware of the Chinese missile launch from the man-made structures in the South China Sea near the Spratly Islands," Pentagon spokesman Lieutenant Colonel Dave Eastburn said.

"I'm not going to speak on behalf of all the sovereign nations in the region, but I'm sure they agree that the PRC's behaviour is contrary to its claim to want to bring peace to the region and obviously actions like this are coercive acts meant to intimidate other (South China Sea) claimants," Eastburn added. (PRC is an acronym for the People's Republic of China.)

China's claims in the South China Sea, through which about $US5 trillion in ship-borne trade passes each year are contested by Brunei, Malaysia, the Philippines, Taiwan and Vietnam.

News of the China missile test was first reported by NBC News.