China ‘must be prepared to make the first nuclear strike’ in response to growing US presence in the region and AUKUS strategic partnership, senior diplomat declares

China must be ready to use nuclear weapons and should abandon its ‘no-first-use’ policy to push back against new alliances forming in the Pacific, a senior diplomat has said.

Sha Zukang, the country’s former ambassador to the UN, told a summit of Chinese nuclear policy experts that it is time to ‘re- examine and fine-tune’ a long-standing commitment to only use nukes in retaliation as the US ‘builds new military alliances and as it increases its military presence in our neighbourhood.’

Beijing’s current policy – which has been in place since the 1960s – has given China the ‘moral high ground’ but ‘is not suitable . . . unless China-US negotiations agree that neither side would use [nuclear weapons] first,’ he said at a meeting in Beijing last week.

Zukang’s comments – which come as China builds hundreds of new nuclear missile silos – are significant because Beijing often floats changes of policy through senior diplomats. The body he was speaking to – the China Arms Control and Disarmament Association – is officially independent, but has strong ties to the Communist party.

He spoke in the same week the US announced a major new alliance with the UK and Australia – dubbed AUKUS – to provide the latter with its first nuclear-powered submarines, a major technological advancement that is clearly designed to counter-balance Chinese power in the Pacific.

Zukang’s warning also comes in the wake of another alliance between the US, India, Japan and Australia – dubbed the Quad – with Joe Biden set to host the first in-person summit of leaders today. While the four are cooperating on a range of security issues, the growing threat from China is at the top of the agenda.

A new arms race is developing in the Pacific between the US and China, which could also drag in Russia – which borders the ocean – and the UK, after it signed a new defence pact with America and Australia. Here, a MailOnline graphic compares the relative sizes of each country’s current nuclear arsenals

China became a nuclear power in 1964 with its first successful test of a bomb, and adopted its ‘no-first-use’ policy four years later. It states that Beijing will never be the first to use nukes in a conflict, but will use them if struck first.

It mirrors a policy that Russia implemented between 1982 and 1993, though abandoned due to fears that the weakened state of its army following the break-up of the Soviet Union could encourage an attack by the US.

The US has a policy to never use or threaten to use nuclear weapons against a majority of other nations including all those without nuclear weapons – but has exempted China, Russia and North Korea from the policy.

Global nuclear policy is rapidly changing as a number of Cold War-era treaties – notably New START and the Intermediate Range Nuclear Forces Treaty – expire, with Washington hoping to renegotiate them to include China.

Zukang, in his speech, said it is ‘only a matter of time’ before such a deal is negotiated, but that Beijing should be prepared to take a more-aggressive stance until the trio put pen to paper.

China is in the midst of a major upgrade of its nuclear forces, which in recent years has seen it unveil more-advanced intercontinental ballistic missiles (ICBMs) and hypersonic nuclear missiles that are thought to be un-stoppable by current missile defence systems.

Beijing is thought to possess around 320 nuclear warheads that can be fitted to those missiles at present, but is also thought to be in the midst of a major expansion of that arsenal.

It comes after the discovery in July of two huge new missile silo bases under construction in remote desert regions of China.

Experts believe the first, near the city of Yumen, will eventually house 120 silos while the second, near the town of Hami, will house 110. A dozen more are under construction near Jilantai, with older sites also being upgraded.

Each silo can house a nuclear missile, with each missile capable of carrying up to 12 nuclear warheads if China upgrades all of them to carry its latest DF-41 rocket.

That means China’s nuclear arsenal could theoretically expand to 875 warheads. Hu Xijin, editor of the state-mouthpiece Global Times newspaper, has previously argued that it should expand to 1,000.

The move would elevate China above the low-ranking nuclear powers such as the UK, Pakistan, France and India which have stockpiled warheads in the low hundreds.

But it would still be well short of the US and Russia, the world’s two largest nuclear powers, which possess arsenals of around 4,000 warheads each.

The construction of hundreds of silos also marks a major shift in the make-up of China’s nuclear threat, which currently relies heavily on mobile road-based launchpads and nuclear-capable bombers. China also has four nuclear-armed submarines.

China is expanding its military as its economy balloons to rival that of the US, having lagged behind for decades.

In addition to building new nuclear missiles and silos, it has constructed new aircraft carriers, tanks, fighter jets, spy and attack drones, along with new rifles for its troops.

Beijing has used the new hardware to take a more aggressive stance in the Pacific: Imposing its rule on Hong Kong, menacing Taiwan, and laying claim to a number of uninhabited islands in the South China Sea which it has constructed military bases on top of.

It has also been pressing its claim to a number of other islands whose ownership is disputed, creating tensions with other regional powers such the Philippines, Vietnam, Malaysia and others. Similar disputes are underway in the East China Sea, around islands claimed by Japan.

China claims rights over the South China Sea in its entirety, which would hand Beijing control over hugely valuable international shipping lanes, fishing grounds which neighbouring countries rely on for food, and deposits of coal and oil which dot the seabed. 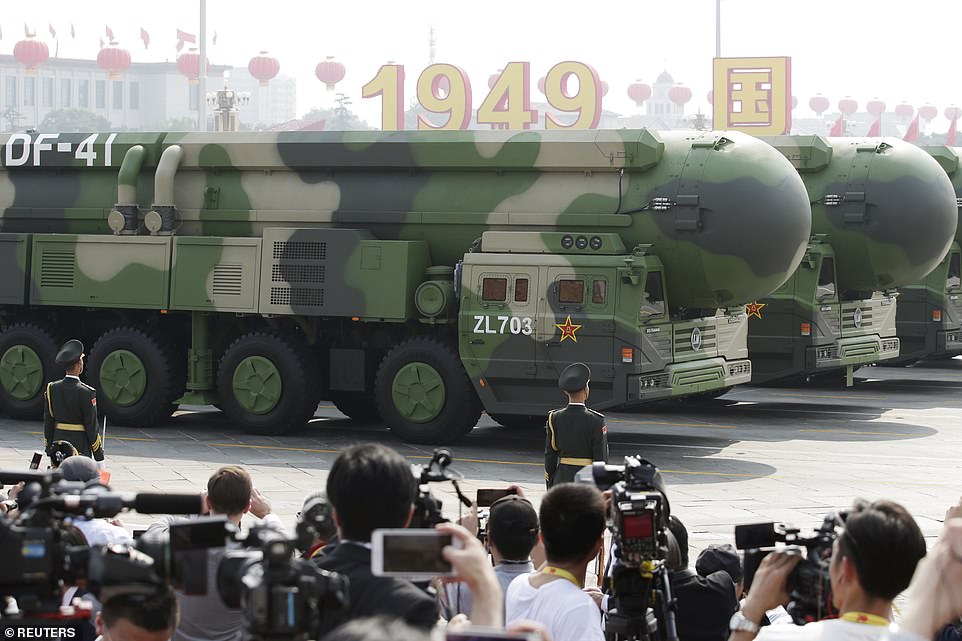 China has also updated its nuclear arsenal in recent years, having unveiled its next-generation intercontinental ballistic missile DF-41 – capable of hitting virtually anywhere on the planet and carrying 12 warheads each 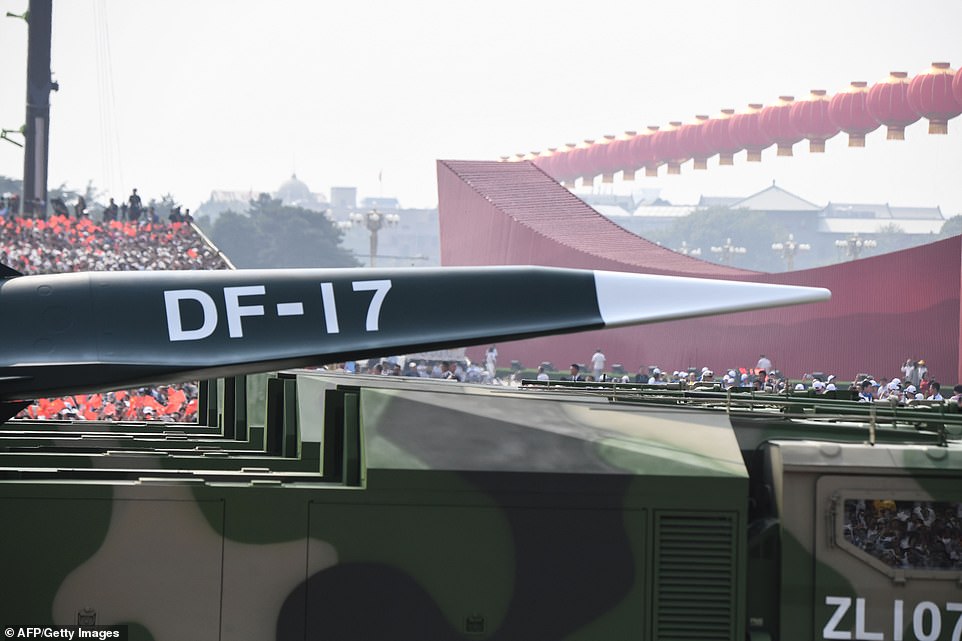 Beijing has also developed a hypersonic nuclear missile, the Dongfeng-17, which is thought to be impossible to stop for any current missile defence system 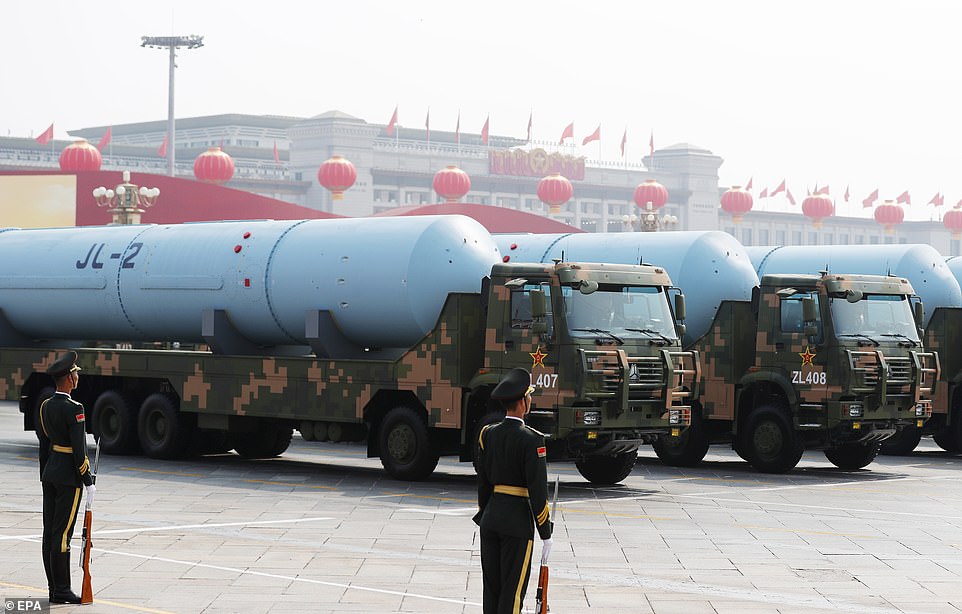 Also unveiled by China in 2019 was the JL-2 submarine-launched ballistic missile, which is carried by its Jin-class nuclear submarines and can be tipped with nuclear warheads

The US and its allies have been pushing back on these claims, and frequently conduct what they call ‘freedom of navigation’ operations through waters that China claims as its own in defiance of Beijing.

A recent and high-profile mission was led by the UK’s newest aircraft carrier – HMS Queen Elizabeth – and its strike group, which included American destroyers. It provoked and angry response from the Communist Party (CCP).

With the end of the war in Afghanistan and the signing of the new AUKUS pact, attention has shifted away from the Middle East and towards the Pacific as the threat of direct conflict between the US and China looming large.

The flashpoint is likely to be Taiwan – and island off the Chinese coast that houses the remnants of the People’s Republic of China, which once ruled the country and was deposed by the CCP when it came to power.

Historically, the US has recognised the ROC as the legitimate government of China and the two have a long-standing alliance. Taiwan views itself as an independent state, while Beijing considers it a breakaway province.

Tensions have mounted in recent years after a 2019 speech by Xi Jinping in which he committed himself to ‘reunifying’ Taiwan with the mainland, saying he is willing to use force if necessary.

The US has a policy of ‘strategic ambiguity’ towards Taiwan, refusing to say how far it would go in defence of the island – though Joe Biden recently suggested any attack would prompt a war. Officials later said he had misspoke.

With the signing of the AUKUS pact, Australia and Britain could also find themselves on the frontlines of the conflict – with Australia defence minister Peter Dutton admitting as much last week.

Boris Johnson, asked directly whether the new pact could see Britain dragged into a war, refused to rule anything out – telling the House of Commons: ‘The United Kingdom remains determined to defend international law.’ 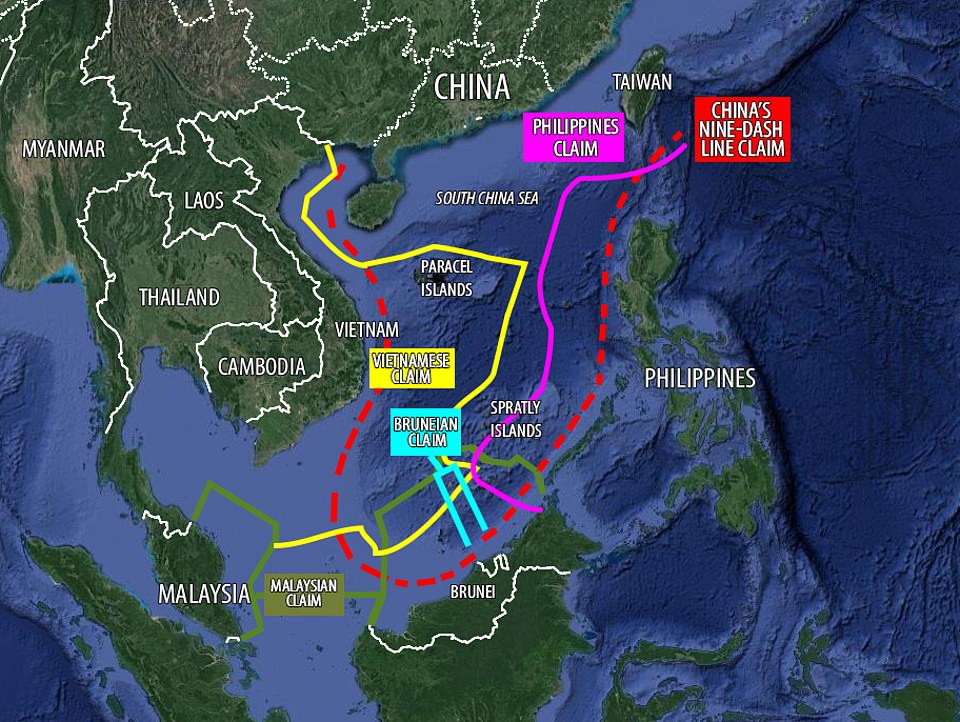 China is using its new military hardware and economic might to throw its weight around in the Pacific, most notably in the South China Sea which has caused disputes with neighbours including Vietnam, the Philippines and Malaysia 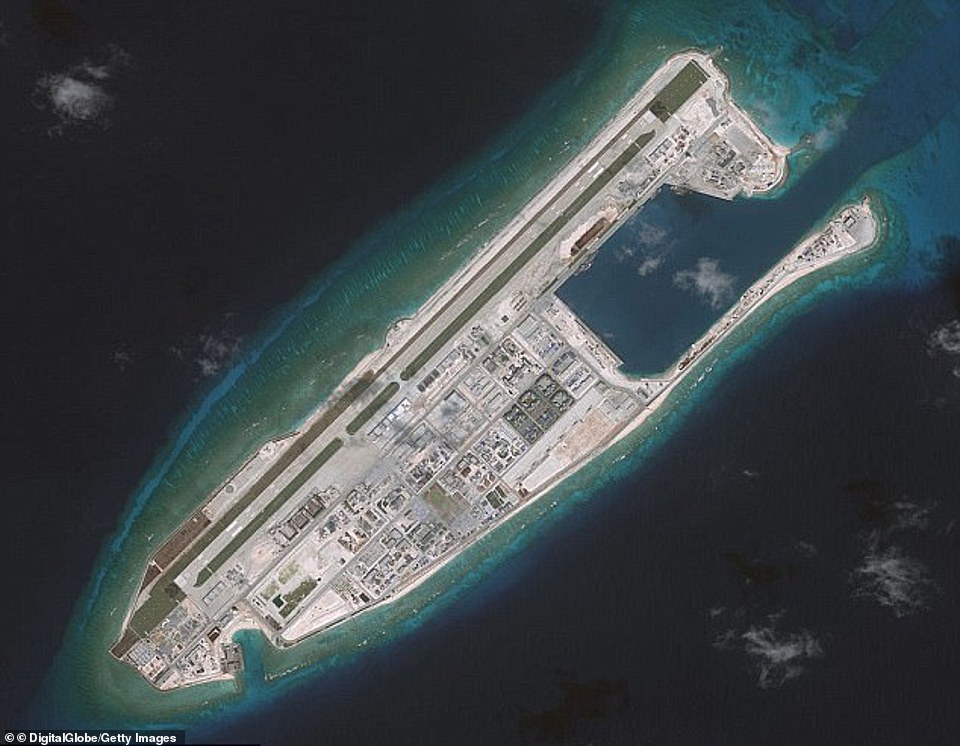 China has transformed several uninhabited islands in the South China Sea into military bases and has begun warning ships away from them, including threatening rival naval vessels