China is running out of beds to cope with newly infected coronavirus patients, despite building new hospitals

China scrambled to find bed space for thousands of newly infected patients on Thursday, as the death toll from the novel coronavirus soared to 563.

More than 28,000 people are now known to be infected nationwide in the outbreak that has spiralled into a global health emergency.

Two dozen countries now have confirmed cases of the coronavirus that emerged from a market selling exotic animals at the end of last year. 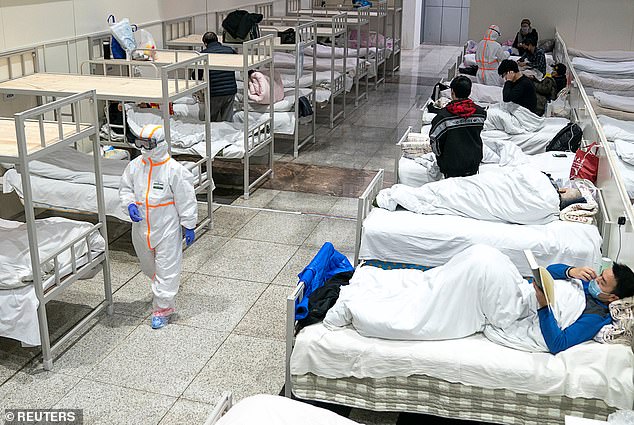 The Wuhan International Conference and Exhibition Center has been converted into a makeshift hospital to care for patients with mild symptoms of the coronavirus, which has now infected more than 28,000 people in China

Coronavirus: What we know so far

What is this virus?

The virus has been identified as a new type of coronavirus. Coronaviruses are a large family of pathogens, most of which cause mild lung infections such as the common cold.

But coronaviruses can also be deadly. SARS, or severe acute respiratory syndrome, is caused by a coronavirus and killed hundreds of people in China and Hong Kong in the early 2000s.

Can the Wuhan coronavirus kill?

Yes – 563 people have so far died after testing positive for the virus.

Some people who catch the Wuhan coronavirus may not have any symptoms at all, or only very mild ones like a sore throat or a headache.

Others may suffer from a fever, cough or trouble breathing.

And a small proportion of patients will go on to develop severe infection which can damage the lungs or cause pneumonia, a life-threatening condition which causes swelling and fluid build-up in the lungs.

How is it detected?

The virus’s genetic sequencing was released by scientists in China and countries around the world have used this to create lab tests, which must be carried out to confirm an infection.

Delays to these tests, to test results and to people getting to hospitals in China, mean the number of confirmed cases is expected to be just a fraction of the true scale of the outbreak.

How did it start and spread?

The first cases identified were among people connected to the Huanan Seafood Wholesale Market in Wuhan.

Cases have since been identified around China and are known to have spread from person to person.

What are countries doing to prevent the spread?

Countries in Asia have stepped up airport surveillance. They include Japan, South Korea, Thailand, Hong Kong, Indonesia, Malaysia and Philippines.

Australia and the US are also screening patients for a high temperature, and the UK announced it will screen passengers returning from Wuhan.

Is it similar to anything we’ve ever seen before?

Experts have compared it to the 2003 outbreak of severe acute respiratory syndrome (SARS). The epidemic started in southern China and killed more than 700 people in mainland China, Hong Kong and elsewhere.

On Thursday, thousands of people were stranded aboard two cruise ships in Asia, with tests finding that 20 people had contracted the virus in one of the vessels.

At the Chinese epicentre of the epidemic in Hubei province, the locked-down city of Wuhan was due to open a second field hospital, offering 1,600 beds.

The first hospital, with 1,000 beds, opened earlier this week, and authorities said they were converting public buildings into temporary medical facilities to deal with the influx of sick people.

The city of 11 million is facing a ‘severe’ lack of beds, said Hu Lishan, a senior official in Wuhan, noting that there were 8,182 patients admitted to 28 hospitals that have a total of 8,254 beds.

There is also a shortage of equipment and materials, Hu told reporters.

The central government has announced measures intended to ensure the supply of vital medical resources, with tax breaks for manufacturers of equipment needed to fight the epidemic.

‘We must make all-out efforts across the country to meet the need for essential medical supplies and medical professionals in Hubei Province,’ Premier Li Keqiang said, according to the official Xinhua news agency.

BGI Group, a genome sequencing company based in southern China, said it opened on Wednesday a lab in Wuhan able to test up to 10,000 people per day for the virus.

Tens of millions of people in Hubei and surrounding provinces are now facing swingeing restrictions on their movement as authorities try to slow the spread of the virus.

They include residents of Hangzhou, a city just 175 kilometres (110 miles) from Shanghai, where fences block streets and loudspeakers tell people: ‘Don’t go out!’

In some cities, even in the far north of the country, inhabitants are being offered cash rewards to inform on people who come from Hubei.

In Beijing – where streets remain eerily quiet and businesses are shuttered – restaurants have been barred from accepting reservations for parties.

In Nanchang, the capital of Jiangxi province which borders Hubei, pharmacists must send reports to the authorities on anyone buying fever or cough medicine. The city has also limited the number of outings per family.

While the death toll continues to rise, and now includes two people outside mainland China, health experts have stressed that at two percent, 2019-nCoV is far less deadly than the SARS pathogen, which is from the same coronavirus family and killed around 10 percent of the people it infected during a 2002-3 outbreak.

But panic has risen worldwide with countries barring arrivals from China and governments warning against travel to the country, while airlines have halted flights.

At least 20 people on one cruise ship off the Japanese coast have tested positive for the new coronavirus, with thousands more staring at a two-week seaborne isolation.

In Hong Kong, 3,600 passengers and crew spent the night marooned on the cruise ship World Dream as authorities conducted health checks after three former passengers tested positive for the virus.

Italy announced that passengers on every international flight would be scanned for fever.

The World Health Organization, which has declared a global health emergency, has called for $675 million to fight the novel coronavirus.

‘Our message to the international community is invest today or pay more later,’ WHO chief Tedros Adhanom Ghebreyesus said, adding that the funding appeal was ‘much less than the bill we will have to pay if we do not invest in preparedness now’. 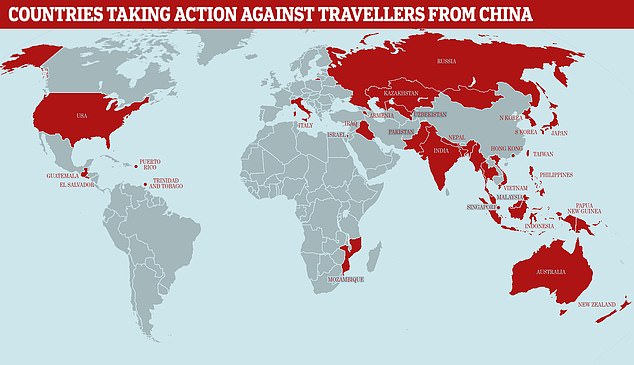 A map showing which countries are taking action against travelers coming from China where the coronavirus originated. A large number of Asian countries have taken action, as well as Australia and the US