With the thirtieth anniversary of the Tiananmen Square massacre approaching, why would
China's defence minister decide to defend the Communist Party's day of infamy?

Not only did he justify the military's murder of untold numbers of peaceful student
protesters in the centre of Beijing's national square in 1989, he reversed the onus of moral
scrutiny: "How can you say that China handled it improperly?" General Wei Fenghe demanded of
an international audience in Singapore on Sunday. 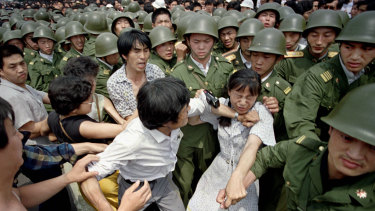 A woman is caught between civilians and Chinese soldiers, who were trying to remove her from an assembly near the Great Hall of the People in Beijing, on June 3, 1989. Credit:AP

The topic has long been taboo in China, rigorously scrubbed from history, censored from
any media mention, commemorations banned.

Sure, Wei was asked about it. Would the People's Liberation Army "finally recognise"
what had happened in Tiananmen Square when it took arms against unarmed students?

But he didn't need to answer. Indeed, he chose to skip a number of awkward questions
when he had the podium at the annual Shangri La defence dialogue. So it was his choice to
reply to this particular question.

"It was political turbulence" and "the Chinese government acted to stop the turbulence", he said. The thirty years of stability and development since has proved that it was the
"correct" decision, Wei said.

But why say it, and so stridently, now? First, it's a telltale of a regime that is unapologetic and increasingly confident.

Ever since the global financial crisis exposed the weakness of the West a decade ago, China has been more and more assertive of its own authoritarian model, less and less tolerant of any criticism. Human rights are out, nationalist hubris is in.

Second, it reinforced the point of Wei's overall performance in front of an influential
international audience – to assert China's inherent right to greatness and to warn Washington against any thought of challenging China militarily. 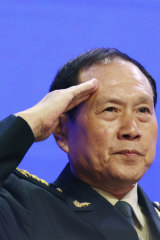 General Wei was showing that the Chinese Communist Party is "man enough" to murder
its civilians to preserve its rule and never look back. As Mao said, "political power grows
from the barrel of a gun". And the regime has a firm grip on the gun.

The party has no interest in regrets. Xi calls criticism of the party's past "historical
nihilism".

And the world has indeed been warned. If the Chinese Communist Party can justify to
itself the brazen murder of its own people, it can justify anything.