‘The Next Revolution’ host says ‘we may not be at war with China but they are, most surely, at war with us.’

A Chinese film about the defeat of the U.S. Army is tracking to become one of the highest-grossing in the country’s history, but reports show how keen the government is to see it take the top spot.

“The Battle at Lake Changjin” is a state-funded film about a group of outgunned Chinese troops who defeated U.S. foes during a battle in the Korean War. The film debuted on Sept. 30 and has already hit around $770 million after its third weekend.

The film already has the fourth-highest box office in Chinese history, Variety reported. Forecasts from Chinese ticket agency Maoyan predict that the film will hit at least $843 million (RMB5.43 Billion), which would make it second-most ever behind “Wolf Warriors II,” which took around $882 million.

A still from the trailer for the 2021 movie "The Battle at Lake Changjin."
(Courtesy YouTube)

However, the film – along with a film called “My Country, My Parents” – is taking up to 80% of screening sessions in China, leaving little room for anything else to scrape out a box office of its own, according to Screen Daily. However, the disparity between first and second is staggering: “Ghangjin” earned around $108.5 million in its third weekend, while “My Country” took only $19.6 million. 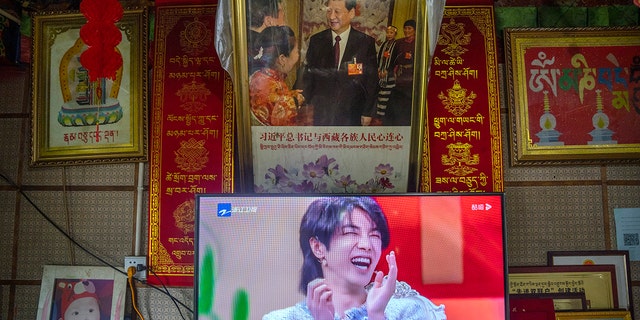 FILE – In this June 4, 2021, file photo, a television shows a broadcast of a Chinese talk show program as it sits beneath a photo of Chinese President Xi Jinping in a home converted into a tourist homestay in Zhaxigang village near Nyingchi in western China’s Tibet Autonomous Region. China’s government banned effeminate men on TV and told broadcasters Thursday, Sept. 2, 2021 to promote "revolutionary culture," broadening a campaign to tighten control over business and society and enforce official morality.
(AP Photo/Mark Schiefelbein)

The Global Times also ridiculed American cinema, saying that “unlike the illusory superhero stories in the West, China’s ‘The Battle at Lake Changjin’ is from real history.” The paper goes on to proudly claim that its “predecessors and martyrs are more remarkable and true legends compared with those heroes that only exist in movies.”

China’s government recently banned effeminate men from TV and told broadcasters to promote “revolutionary culture” to help a “national rejuvenation” in the country.  Companies and the public are under increasing pressure to align with its vision for a more powerful China and healthier society.

Therefore, China appears to be lining up “Changjin” as an opponent to the various American blockbusters from Marvel and DC Comics that play across Chinese screens every year.

China may end up getting its wish as the film is very likely to end up the highest grossing film of 2021 – not just in China but anywhere in the world: That title will depend on how the new James Bond film “No Time To Die” and sci-fi epic “Dune” will perform when they debut later this month.

The highest-grossing Western movie is “Avengers: Endgame,” which raked in RMB4.25 billion (around $660 million), followed by “The Fate of the Furious” with RMB2.67 billion (around $415 million).

“My Country, My Parents,” the third entry in the historical anthology film series celebrating the founding of the People’s Republic of China, currently sits just above “The Fate of the Furious” with RMB2.82 billion (around $439 million).