China’s military machine launches THREE warships in one day: One vessel joins its navy as two others are exported

China launched three warships in one day on Christmas Eve in a show of strength as they were among some of the most advanced ships the country has built.

Beijing will keep one of the ships for its own navy, while the other two will go to Thailand and Pakistan respectively.

Thailand will take a 071E landing platform dock (LPD) that it ordered in September 2019 while Pakistan and China have each received a Type 054 frigate.

The boats were launched at the Hudong-Zhonghua Shipbuilding yard near Shanghai on December 24. 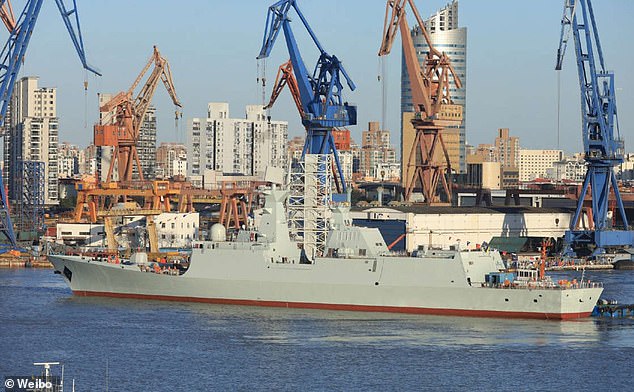 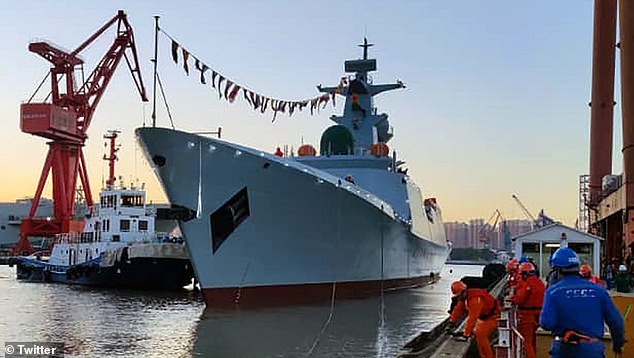 The two frigates have minor changes between them as each was built for a different navy. Pictured: One of the Type 054 frigates 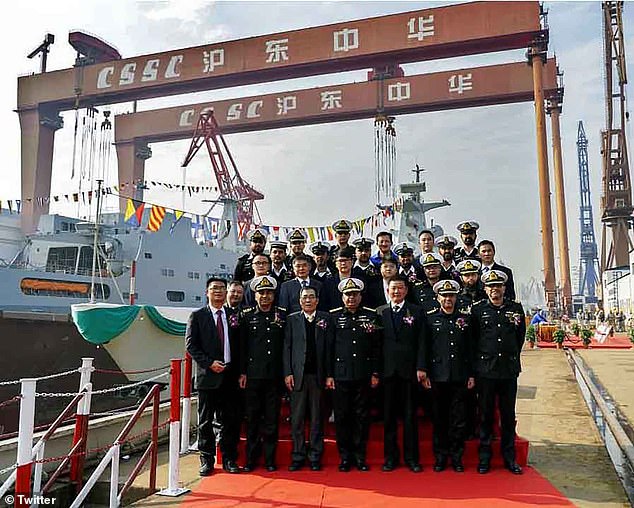 The Pakistan Navy variant of the frigate is reportedly fitted with an SR2410C radar and a 3D multifunction electronically scanned array radar.

Meanwhile the Chinese version will join around 30 similar ships in the country’s navy.

The 071E LPD destined for Thailand will be able to deploy helicopters and will most likely be used in patrols and disaster relief missions.

China has the world’s largest navy and is preparing to launch a new high-tech aircraft carrier by February, the Pentagon revealed last month. 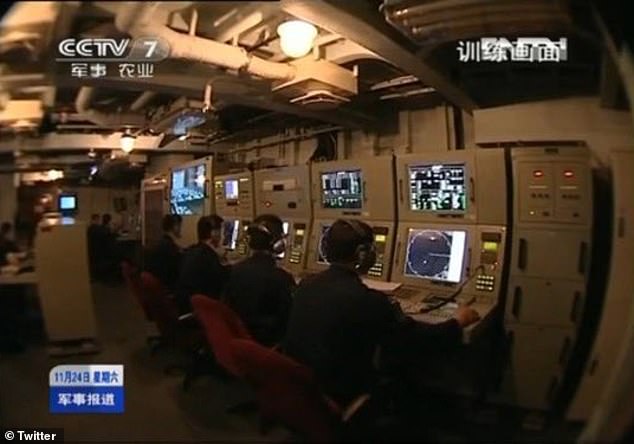 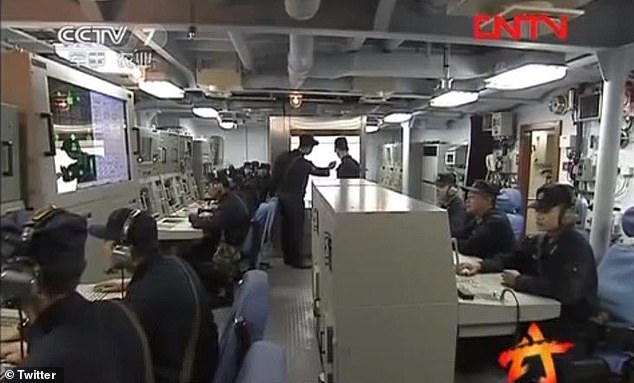 Beijing has expanded its Navy as tensions are high between China and the West, especially America

Beijing has ‘numerically the largest navy in the world with an overall battle force of approximately 355 ships and submarines,’ the US Defence Department said last Wednesday in its annual report on China.

That compares with 296 warships at the US Navy’s disposal, 69 vessels operated by the Royal Navy and 295 boats deployed by the Russian Navy.

Beijing is expected to add a third aircraft carrier in early 2022, dubbed Type-003, with satellite images from the shipyard published today indicating that it will rival the American super carriers. 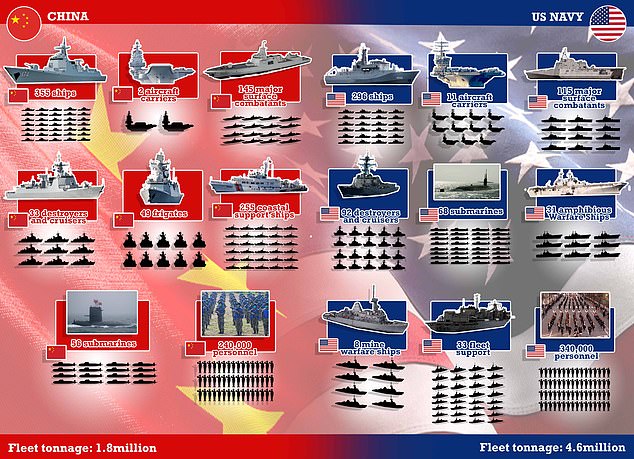 Pictures of Jiangnan Shipyard from September to October show that significant progress has been made to the carrier’s external components and that works on other vessels in the yard appear to have slowed, perhaps because the Type-003 has taken precedence.

Washington-based think-tank, the Center for Strategic and International Studies, says that the carrier could be ready as early as February, stating that it ‘will launch in roughly three to six months.’

The US currently leads the world with 11 aircraft carriers, Britain operates two, including its brand new HMS Queen Elizabeth, while Russia owns a single carrier.

China’s growing threat was underscored further as satellite pictures emerged of mock-ups of a US aircraft carrier and destroyer in its northwestern desert, believed to be used in wargames amid rising tensions between the nuclear-armed nations. 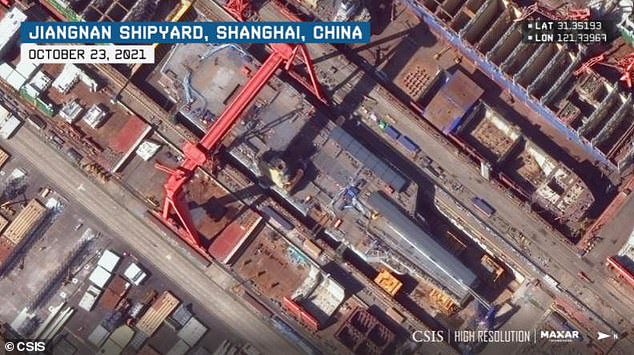 Pictures of Jiangnan Shipyard from September to October show that significant progress has been made to the carrier’s external components and that works on other vessels in the yard appear to have slowed, perhaps because the Type-003 has taken precedence. 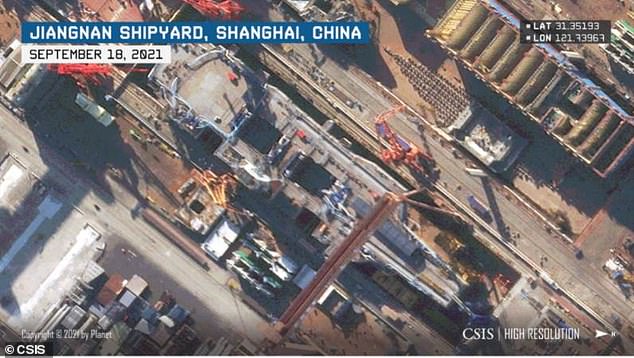 The Type-003 under construction in Jiangnan Shipyard in September. The vessel is expected to launch in February 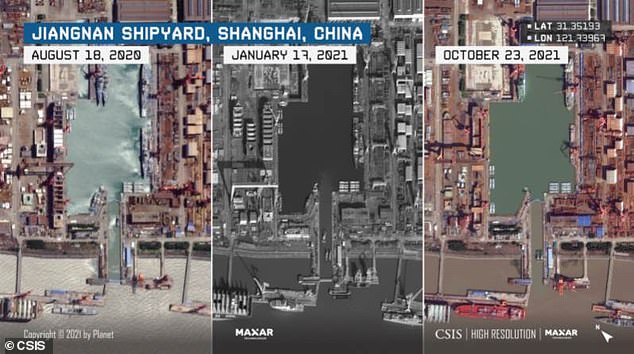 China has built mock-ups of US aircraft carriers (pictured) in the country’s northwestern desert, possibly in preparation for future naval strikes 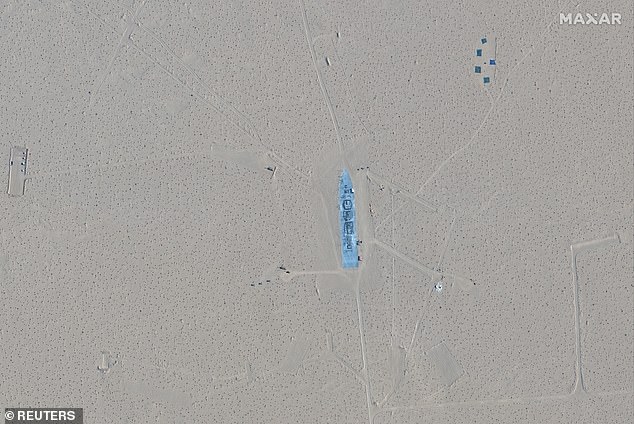 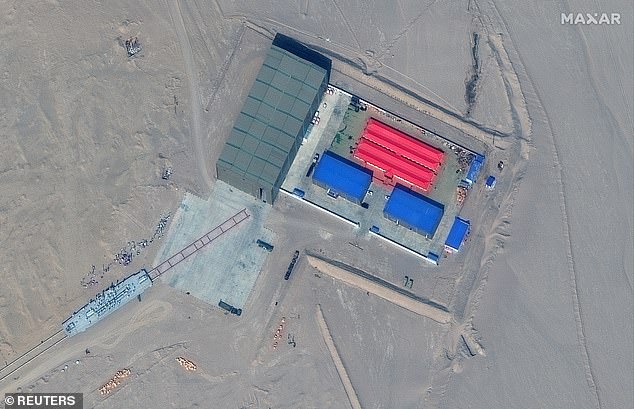 The independent US Naval Institute said on its website that the mock-ups of US ships (pictured, a rail terminus and target storage) were part of a new target range developed by the People’s Liberation Army

Maxar identified the location as Ruoqiang, a Taklamakan Desert county in the northwestern Xinjiang region.

The independent U.S. Naval Institute said on its website that the mock-ups were part of a new target range developed by the People’s Liberation Army (PLA).

The USNI said it could identify features on the destroyer including its funnels and weapons systems.

Chinese Foreign Ministry spokesperson Wang Wenbin said at a daily briefing Monday that he had no information about the images, saying, ‘I’m not aware of the situation you mentioned.’

China’s massive military upgrade has emphasised countering the US and other countries’ naval forces.

That includes the development of land, sea and air-launched missiles to repel and possibly sink opposing vessels, expressed most emphatically by the land-based DF-21D ballistic missile known as the ‘carrier killer.’

Recent months have also seen a substantial increase in Chinese military flights just southwest of Taiwan, the self-governing island republic claimed by Beijing and which it threatens to annex by force.

Washington provides Taiwan with much of its weaponry and US law requires that it ensures the island can defend itself and treats threats to it as matters of ‘grave concern.’