Man, 68, has a 10-inch chopstick stuck in his belly after inserting it into his backside ‘out of curiosity’

A 68-year-old Chinese man has had a chopstick lodged in his belly after sticking it into his rear ‘out of curiosity’.

The elderly resident, who remains anonymous, claimed that he was interested in checking his backside after developing piles.

Doctors made the shocking discovery during an X-ray scan after the man had gone a hospital for severe abdominal pain. 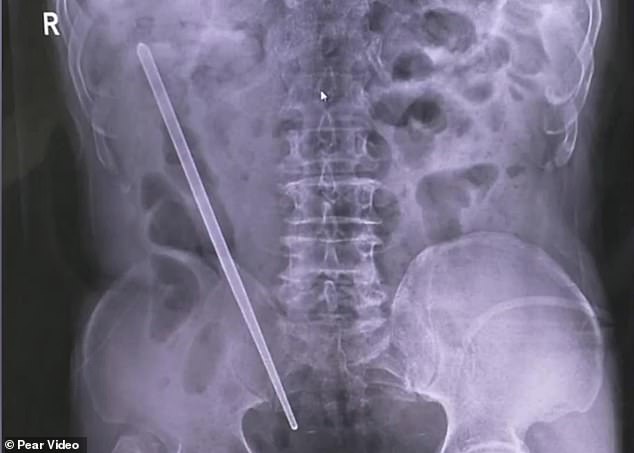 A 68-year-old Chinese man has accidentally inserted a chopstick from his anus into his belly after using the metal stick to check his haemorrhoids ‘out of curiosity’. The picture shows a X-ray scan of the elderly resident in which the metal stick is visible being stuck in his belly 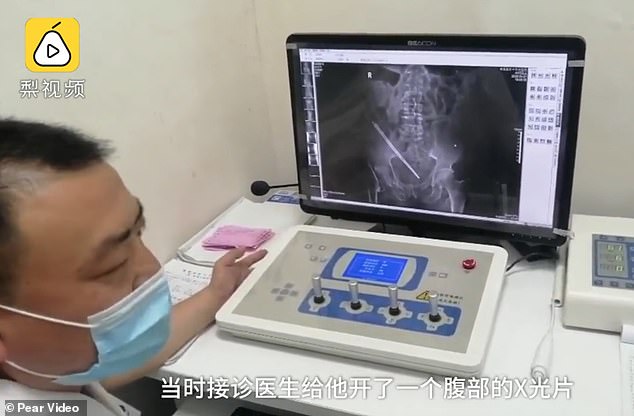 Doctors made the shocking discovery after giving the man an X-ray scan. Pictured, an unnamed medic from a hospital in Xiangyang, Hubei province of central China shows the scan

The patient has been discharged from the hospital after medics removed the metal stick from the pensioner’s intestines.

Media reports did not specify the chopstick’s length, but the Chinese cutlery is typically about 25-centimetre (10-inch) long.

Footage released by Pear Video shows the long chopstick stuck in the patient’s belly. It can even be seen moving up and down slightly as the resident breathes.

The elderly man visited a hospital in Xiangyang, Hubei province of central China on April 22 after he suffered severe abdomen pains, an unnamed doctor told the local press.

‘A duty doctor gave him an X-ray scan and we spotted a metal object in the patient’s abdominal cavity,’ said the medic.

‘During the surgery, we removed a metal chopstick from [his] colon.’ 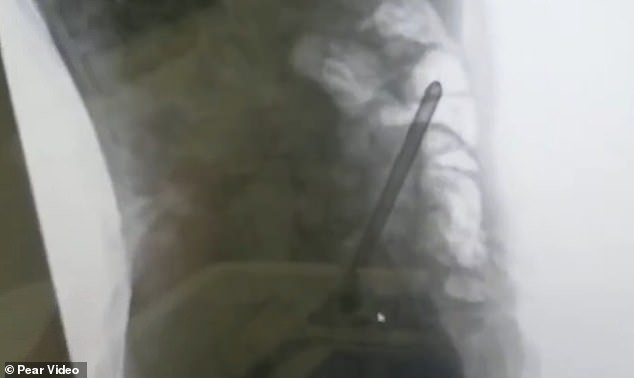 The elderly man visited a hospital in Xiangyang, Hubei province of central China on April 22 after he suffered severe abdomen pains, an unnamed doctor recently told the local press. The picture shows a X-ray scan of the patient’s side abdominal profile with the metal stick 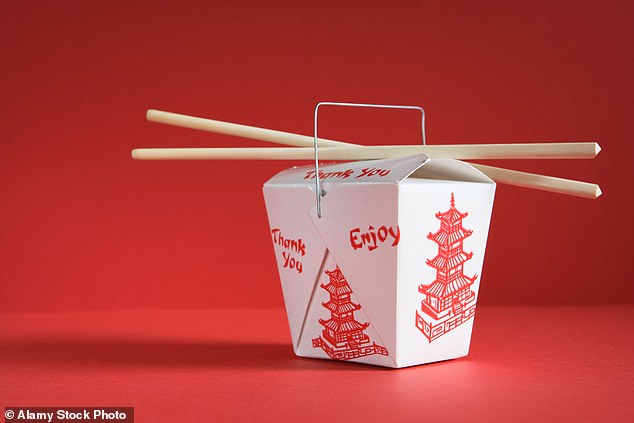 Media reports did not specify the chopstick’s length, but the Chinese cutlery is typically about 25-centimetre (10-inch) long. The stock image shows a pair of chopsticks with takeaway food

The elderly resident confessed to the medics that he was using the stick to check his haemorrhoids ‘out of curiosity’.

Haemorrhoids, also known as piles, are swollen veins located around the lower part of the anus and rectum.

‘As of this patient, he inserted a metal chopstick from anus to a deep position in his colon,’ the doctor added. ‘It is indeed very rare.’

Nearly three out of four adults will have hemorrhoids from time to time, according to The Mayo Clinic.

The veins around your anus tend to stretch under pressure and may bulge or swell.

Symptoms of piles include: