More than 100 angry parents have stormed a school and clashed with armed riot police in China as they accuse the school of giving their children rotten food.

Parents claim the well-established school in Chengdu, which charges up to £4,480 a year, has been providing pupils with mouldy, rotten meat as well as expired frozen food.

The city’s education authorities and the school have launched investigation into the matter. The school has also issued a public apology and suspended the worker who was in charge of the school canteen, according to a statement from the school. 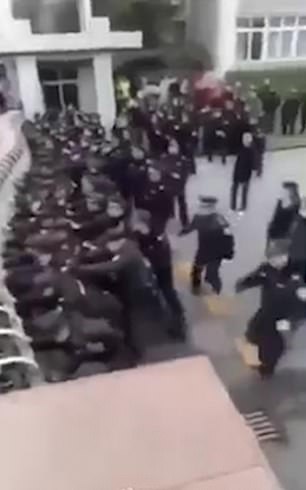 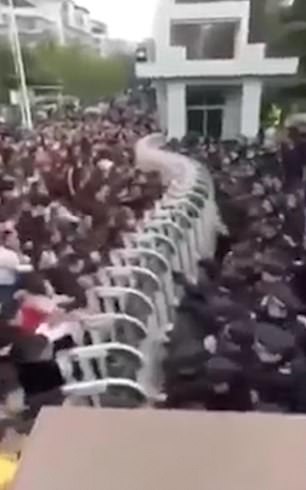 Angry parents try to push open the school gate as police officers and security guards stop them in Chengdu, China. The parents accuse the school of giving their children rotten food

It is said the shocking discovery was made by one parent who had spent one month working in the school canteen undercover.

The parent wanted to find out whether the school’s meals were safe after multiple pupils in the school has suffered from persistent illnesses including stomachache, breathing problems and blood in faeces.

The incident occurred at the privately run Chengdu No. 7 Experimental School in the cosmopolitan capital of Sichuan Province in south-west China.

According to the school’s website, it has more than 6,000 pupils and teachers. Comprising 140 classes from grade one to grade 12, the school’s pupils range from six to 18 in age.

Emotional parents swarmed to the school yesterday morning to challenge the management after pictures of questionable burgers, ribs and seafood had been widely shared on Chinese social media WeChat the day before.

It is said the school outsources food from a company that supplies meals to more than 100,000 students at more than 20 schools in Chengdu. 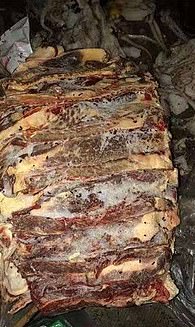 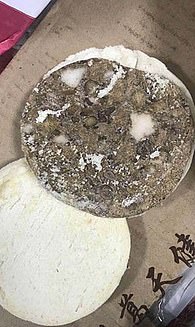 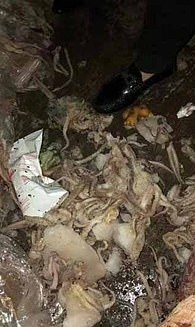 The pupils at the well-established privately run school were said to be given mouldy, rotten meat as well as expired frozen food (pictured). The shocking discovery was made by one parent who had spend one month working in the school canteen undercover 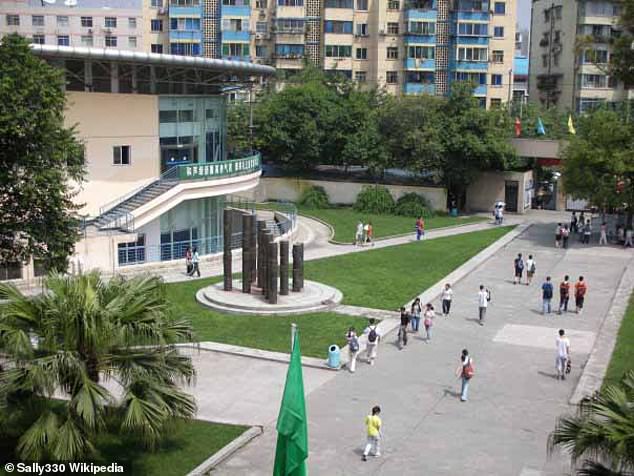 The incident occurred at the Chengdu No. 7 Experimental School (pictured) in Chengdu, the cosmopolitan capital of Sichuan Province. The school charges each pupil up to £4,480 a year

Social media footage filmed yesterday shows a large number of parents trying to push open the school gate. They were stopped by dozens of police officers and security guards who attempted to push them back.

One clip shows at least five policemen dragging and tackling one man, thought to be a parent.

Another clip shows officers armed with shields in a stand-off with a few parents who appeared to be holding a banner in front of the school to demand answers.

Footage also show officials from the Chengdu education authorities and the school trying to calm the parents on campus.

Police used tear gas on some parents and detained 12 people, a statement issued by the local Wenjiang Police on social media said.

According to the police statement, officers were sent to the scene to maintain order of the traffic. It said some parents scolded and beat officers in order to prevent them from carrying out their duty, therefore ‘a minimum amount’ of tear gas was used. 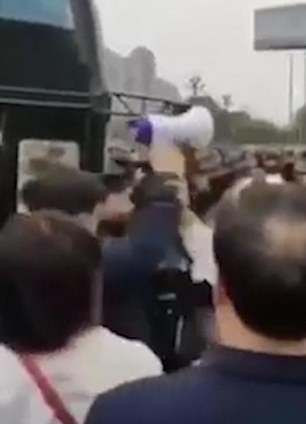 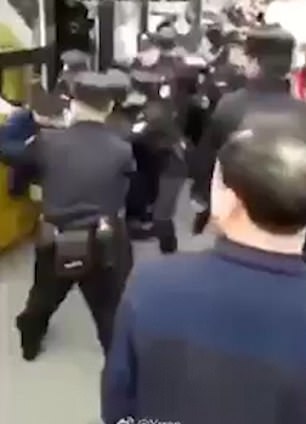 Social media footage shows parents clashing with riot police. Police used tear gas on some parents who had attacked them and detained 12 people, according to a police statement

The 12 people were said to be detained for ‘severely disrupting normal social order’. They were released in the afternoon after admitting to their mistakes, police said.

The food safety scandal has also sparked an uproar on Weibo, the Chinese equivalent to Twitter.

Under a hashtag, whose name is translated to ‘Chengdu No. 7 Experimental High School’, parents posted photos and videos of the incident, urging the authorities to react and give them answers.

The hashtag had gathered 270 million views as of yesterday, but has been taken down today.

The Wenjiang People’s Government in Chengdu said in a statement yesterday that local authorities had sealed the relevant stock of food and sent them for inspection. The government is now investigating the staff in charge of the school and the school canteen.

Chengdu Number Seven Experimental School admitted it had ‘unavoidable responsibility’ over the matter, and said it had suspended the person in charge of the canteen.

In a statement yesterday, the school apologised to the students, parents and faculty and vowed to investigate the matter thoroughly.