Christian Brother Rex Francis Elmer will be classified as a serious sexual offender for the rest of his life after being sentenced for “abhorrent” and “depraved” historic abuse of children at a Melbourne orphanage.

Elmer, now 76, fronted the County Court of Victoria on Friday dressed in a white forensic suit and blue gloves where he was jailed for two years, with a non-parole period of nine months, for abuse against two further boys. 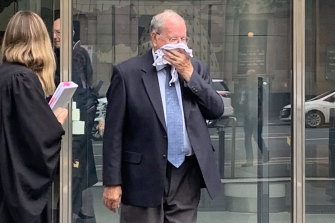 The court heard his victims suffered sustained and ongoing abuse while aged between 10 and 13 and living at St Vincent Boy’s Home where Elmer worked at South Melbourne in the 1970s.

It’s the third time Elmer – who remains a Christian Brother – has been jailed for sexual offending against children in his care after previously pleading guilty to crimes against 13 other school-aged boys in the 1970s.

On Friday, the court heard the first of Elmer’s latest two victim was put into state care when he was eight after his father abandoned the family.

After being moved into a Christian Brother dormitory run by Elmer, he was repeatedly woken in the middle of the night and abused for two years from the age of 11.

He said the first assault occurred when Elmer threw off his bed covers, demanded he do as he was told, and put his hand down the boy’s pyjama pants. This assault was interrupted but others soon followed.

Elmer’s second victim was placed at the orphanage when he was seven after his father killed his mother. There, from the age of about 10, he said he was repeatedly sexually abused by Elmer.

During one incident, the boy had been playing in the grounds of the home after school when he was summoned by Elmer and taken to his private bedroom on-site.

In a victim impact statement read to the court, the second victim said he was too scared to complain about the abuse as two other Christian Brothers were known to be very violent to boys in their care.

The victim said he went on to live a life of emotional turmoil; self medicating as memories of the assaults followed him around, always returning.

“This abuse has ranged inside of me for 46 years. The road ahead for me will be difficult,” he wrote.

“Always for me this abuse has been in the shadows of my mind.”

Elmer was aged between 26 and 32 at the time of the offending.

Crown prosecutor David Glynn described the crimes as intrusive and humiliating violations of each child’s body.

He said Elmer targeted the most vulnerable of children, those living in state care and without parents.

“These children were utterly helpless, there was literally nowhere they could turn to for help,” Mr Glynn said.

In a victim impact statement, the second victim said Elmer had assaulted the adolescent nature of childhood innocence at a care home run by the Christian Brothers.

“Through this loosely fashioned arsenal of authority … Elmer brought to bear empowerment for his own sexual satiety,” the second victim wrote.

“His twisted interference became a habit of customary privilege that does not stand alone.”

Elmer was first convicted in 1998 on 12 counts of indecent assault involving boys under his care in the 1970s.Credit:The Age

The Age previously revealed that the most senior Christian Brothers officials in Victoria knew in mid-1976, when they removed Elmer from the orphanage, that he had abused boys there.

Later that year they made Elmer principal of St Joseph’s, a Catholic boys primary school in Warrnambool.

Elmer was in charge of the school from 1976-81. He worked in the town alongside several other notorious paedophile clerics including priests Paul David Ryan and Robert Claffey, and fellow Christian Brother Edward Dowlan (all since jailed for child sexual assault).

He later moved to Tanzania in Africa to set up a Mission School before word of his behaviour at St Vincent’s saw him return to Australia.

Soon after he was sent to Maryland in the United States for counselling at the St Luke Institute for paedophile Catholic clergy.

Upon his return, he continued teaching until 1988 and remained living at a Christian Brothers home in Brunswick until his sentencing on Friday.

Elmer was jailed for five years in September 1998 after pleading guilty to 12 charges of indecent assault against 12 males under 16.

Then, in May 2000 he was sentenced to 18 months jail for a further indecent assault.

As dormitory master at St Vincent’s, Elmer was responsible for up to 40 children at a time, aged between seven and 14.

Since Kirsty Bell founded Goldfinch Entertainment in 2016, the company has funded over 200 film and TV projects over the past five years, including the acclaimed “Never Rarely…