Philip Hammond told business leaders the ‘threat’ of a No-Deal Brexit could be taken ‘off the table’, it emerged last night.

In a marked break from official policy, the Chancellor told executives Article 50 could potentially be ‘rescinded’, a leaked recording revealed.

His comments came in a conference call on Tuesday night following the overwhelming defeat of Theresa May’s withdrawal deal in a Commons vote.

Some business leaders have demanded a second Brexit referendum amid widespread dismay at MPs’ rejection of Theresa May’s deal.

Mr Hammond said there was a majority in Parliament against leaving the EU without a deal. 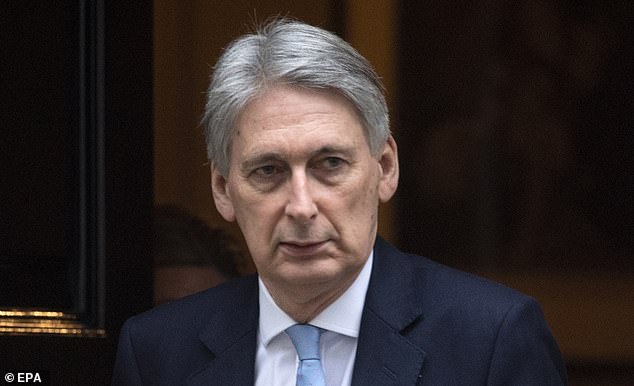 Philip Hammond (pictured) told business leaders the ‘threat’ of a No-Deal Brexit could be taken ‘off the table’, it emerged last night

In the call, Mr Hammond also set out how a backbench Bill, proposed by former minister Nick Boles, could in effect be used to stop any prospect of No Deal. He even suggested ministers would not put any ‘obstacles’ in the way of the plan.

Speaking to the heads of Siemens, Amazon, Scottish Power, Tesco and BP, who all warned against No Deal, he indicated the Government could be open to talks on the customs union. Business Secretary Greg Clark, who was also on the call, argued: ‘We can’t have No Deal.’

The call was held at 9.30pm on Tuesday, less than two hours after the vote. It also featured Brexit Secretary Stephen Barclay, who said No Deal could not be taken off the table.

Mr Hammond said: ‘Could we extend the Article 50 deadline to give us more time? The simple answer is that the EU would not consider the request for the extension… unless or until we have a clear plan to go forward. The sequence has to be first to reach out to opinion across the Commons, to establish the terms on which we can build a majority for a way forward.

‘If necessary [we] go back to the EU to agree changes that are necessary to deliver that consensus. And at that time, if more time is going to be required, to negotiate that with the EU.’ 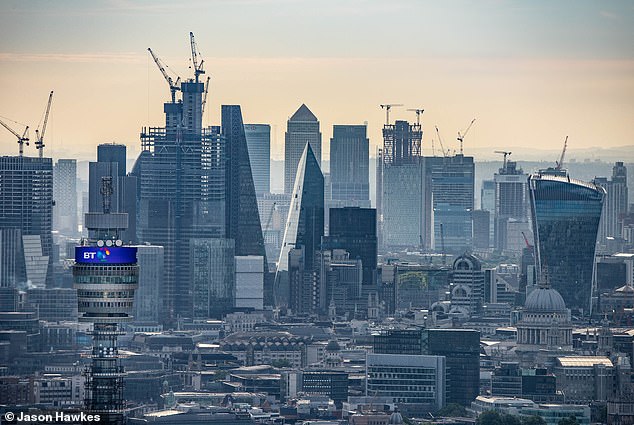 Business leaders are demanding a second Brexit referendum amid widespread dismay at MPs’ rejection of Theresa May’s deal. Senior City figures have signed a letter supporting a second referendum in the hope the result can be reversed (pictured: London’s financial district Canary Wharf)

During the conference call, Mr Hammond added: ‘I can simply as a parliamentarian say it is clear to me there is a large majority in the Commons that is opposed to No Deal in any circumstances.’

It came as senior City figures signed a letter supporting a second referendum in the hope the result can be reversed.

One FTSE 100 boss told Channel 4 News: ‘The new normal is shambles. Politicians seem to be completely indifferent to the impact of their inability to govern. Everyone else has to get up, get dressed, make decisions. But they appear to have lost sight of their basic purpose.’

Signatories of the letter include former Sainsbury’s boss Justin King, who is now a non-executive director of Marks & Spencer.

The letter – which could be published today – has been organised by pro-Remain spin doctor Roland Rudd, brother of Work and Pensions Secretary Amber Rudd.

According to a draft of the letter leaked to Sky News, it will say: ‘Many businesses backed the Prime Minister’s Brexit deal despite knowing it was far from perfect. But it is no longer an option.

‘The priority now is to stop us crashing out of the EU with no deal at all. The only viable way to do this is by asking the people whether they still want to leave the EU.

‘With the clock now ticking rapidly before we are due to quit, politicians must not waste any more time on fantasies. We urge the political leadership of both the main parties to support a People’s Vote.’

Mr King said: ‘It was clear the Prime Minister’s deal was the worst of all worlds, neither Brexit nor Remain.

‘It would have left us poorer and less influential with almost all of the key aspects of our future relations unresolved.’

A spokesman for M&S said: ‘Justin King has not signed this letter on behalf of M&S. It was his personal decision to sign it based on his personal view.’

Meanwhile, more than 100 bosses of firms of all sizes have signed a rival letter from pressure group Leave Means Leave calling for a so-called ‘managed no deal’, where only the most basic agreements are signed before leaving the EU.

Backed by bosses including Tim Martin of pub chain JD Wetherspoon and John Mills of consumer goods firm JML, the letter said: ‘The Government’s deal is not in the best interests of business, nor is it the only option.