Utah’s Great Salt Lake is ‘a puddle of its former self’ and is nearly HALF the size it was 35 years ago: Experts sound the alarm as water levels dip to historic lows with Western states experiencing extreme drought

Climate change has reduced Utah’s Great Salt Lake to ‘a puddle of its former self’ and is now nearly half the size it was 35 years ago, a shocking new report charting the lake’s languishing water levels has revealed.

A growing demand for water, drought, and the impacts of climate change has taken its toll on the lake in recent years, causing roughly half its surface area to up and vanish – a change that cartographers and map-makers across the globe have yet to address, or even realize, according to a report conducted by the Salt Lake Tribune.

Currently, the lake, once thought to stretch for approximately 1,700 square miles, only encompasses a fraction of that number, and is rimmed by vast reaches of exposed lake bed along its shorelines.

Moreover, the lake’s sinking water levels hit historic lows over the summer, during a record-breaking drought and heatwave in the Beehive State – and have since only gotten worse. 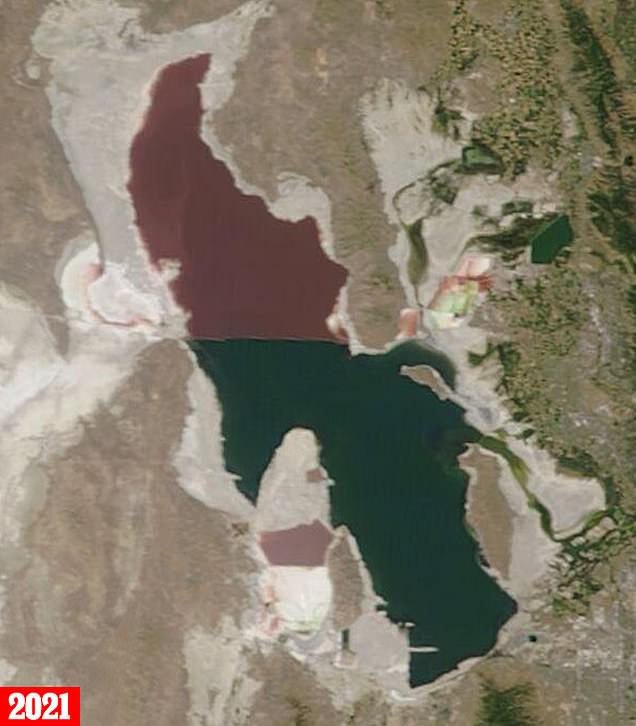 A recent report found that climate change coupled with drought and a growing demand for water has hampered Utah’s Great Salt Lake over the years, causing roughly half its surface area to vanish

Tribune Managing Editor Grant Burningham, who spearheaded the study along with weather forecasting network AccuWeather, equated the lake’s dire situation to ‘a death spiral,’ in an interview with the outlet Monday.

‘We know that the lake is smaller, that it is about half the size that it used to be,’ Burningham told AccuWeather of the report’s findings.

‘We have a chance to raise awareness nationally and locally, when hopefully there’s still things we can do to change the course of the lake – which, right now, frankly, is in a death spiral.’

According to Burningham’s report, the Great Salt Lake – the largest saltwater lake in the entire Western Hemisphere – has shrunk so drastically, that maps depicting the body of water need to be edited to accurately show the lake’s current, sad state. 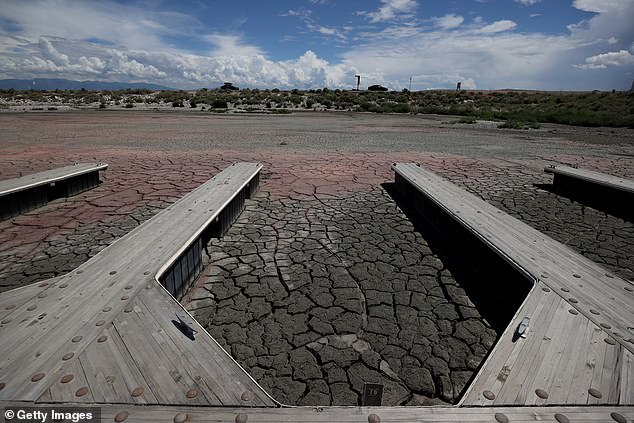 Currently, the lake, once thought to stretch for approximately 1,700 square miles, only encompasses a fraction of that number, and is rimmed by vast reaches of exposed lake bed along its shorelines 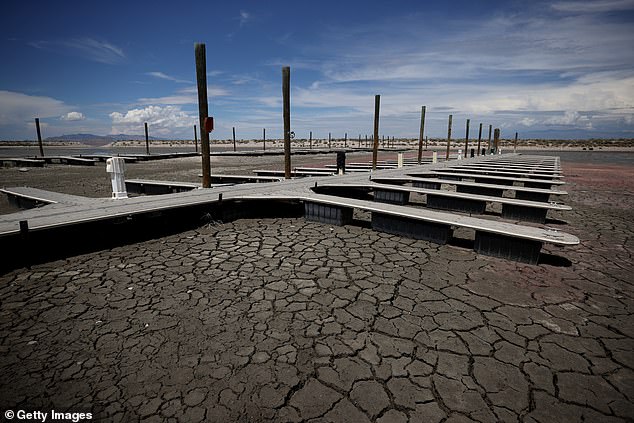 Boat docks sit on dry, cracked earth at Antelope Island Marina in the enormous saltwater lake in August, after Utah was hit with a historic drought. Due to the rapidly reducing water levels, Antelope Island – situated in the middle of briny lake – is no longer an island

‘Maps need to reflect the world around us, especially in the time of climate change, where things are changing so fast and we have such a small window of time where we can change things,’ Burningham told AccuWeather of his report’s startling findings.

‘It’s critical that people update their maps,’ the editor discerned.

With that said, there are growing concerns of the impacts that a markedly smaller, and therefore saltier, lake may have on the area’s ecosystem.

What’s more, the effects that the shrinking lake may have on Utah’s burgeoning economy – which has seen the second-fastest growth rate of any of the 50 states over the past five years, according to a 2021 study by Forbes – has yet to be seen. 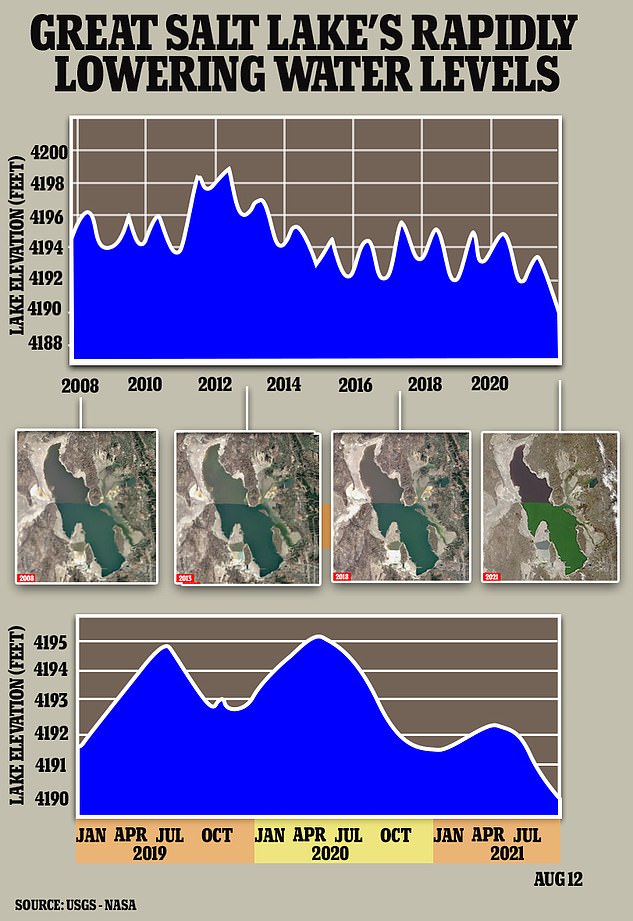 In July, the lake level sank below its lowest level on record due to a drought, and has since kept dipping to dangerous new levels

Shearer said of the potential long-term effects that may be brought on by the lake’s languishing water levels: ‘This body of water is so big, it creates lake effect snowstorms, so it is very crucial to life along the Wasatch Front’ – a largely metropolitan region in the north-central part of the state that boasts a slew of contiguous cities and towns, such as Salt Lake and Park cities.

‘And the economy of Utah – it’s $1.3 billion to Utah’s economy every year,’ longtime Utah resident Shearer revealed to the outlet. 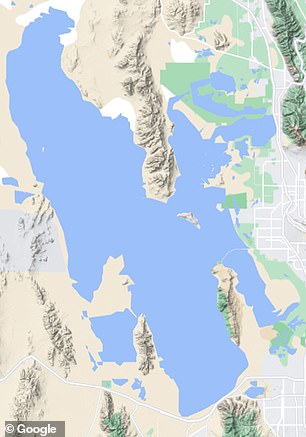 Utah’s Great Salt Lake – the largest saltwater lake in the Western Hemisphere – has shrunk so drastically, that maps depicting the body of water today (left) need to be edited to accurately show the lake’s current, sad state 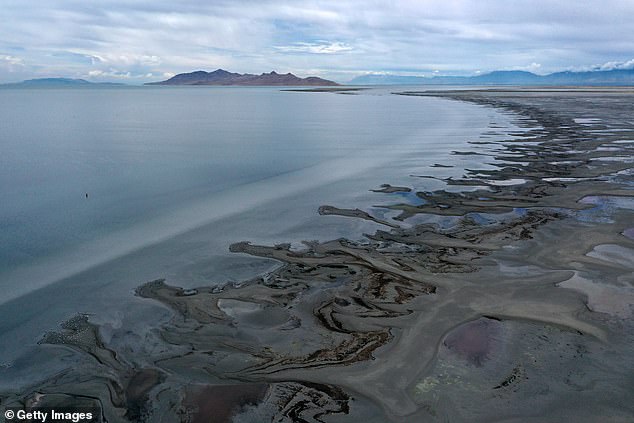 With more of the lake’s shoreline now exposed, the livelihoods of brine shrimp that live in the remnants of the once-great lake are now in danger – as well as those of birds that rely on the sea critters for food

In July, the lake saw its water level sink to the lowest seen on record since measurements began in 1875, nearly 150 years ago, reaching 4191.3 feet above sea level amid drought conditions during an unprecedented heat wave – a phenomena researchers largely attributed to climate change.

And since then, it’s dropped even further, The Tribune’s report reveals.

The lake’s historic average, according to lake coordinator Laura Vernon, who works for the Utah Department of Natural Resources, is 4,200 feet above sea level.

‘This is the historic average,’ the state staffer told The Tribune, before ominously adding, ‘but we are rewriting history.’ 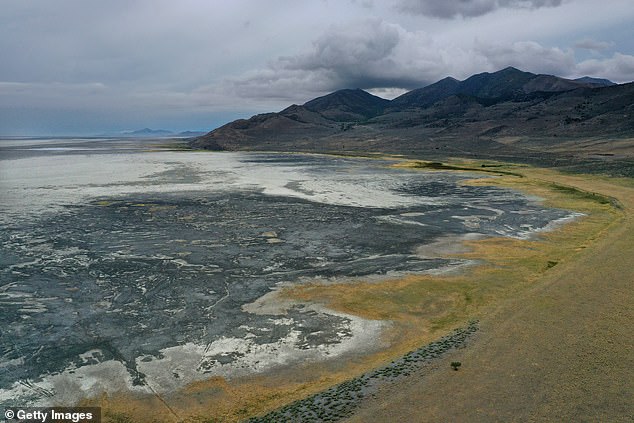 In an aerial photo taken August 2, an area of the Great Salt Lake that was previously underwater can now be seen from the air – completely dry

Today, the lake sits at 4,190.6 feet above sea level – nearly 10 feet lower than what’s typical, according to the Tribune’s report.

Moreover, it holds 7.7 million acre feet of water – about half the historic average. 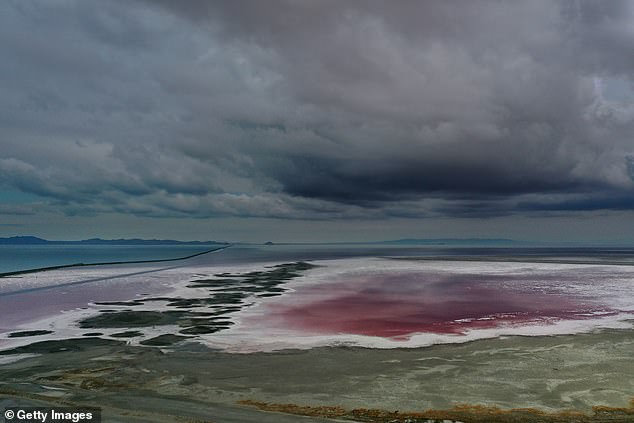 An aerial view of the northern section of the Great Salt Lake on August 2. In July, the lake saw its water level sink to the lowest seen on record since measurements began in 1875. It has since dropped even further 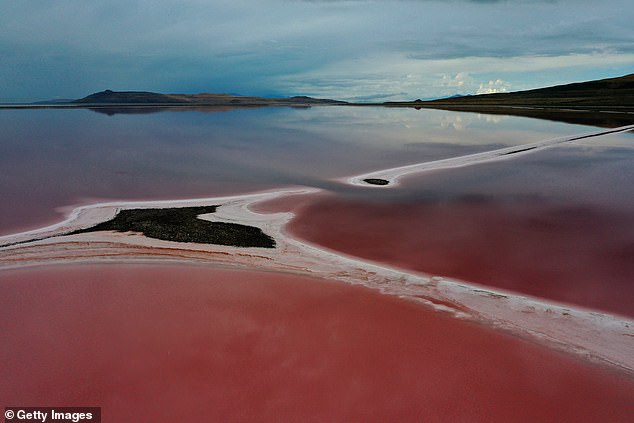 An August aerial view of the lake at its lowest shows its pinkish-red evaporation ponds – colors caused by the lake’s high salinity levels, which increase as water levels lessen

With that said, Utah is one of several Western states experiencing extreme drought conditions that researchers have linked to climate change.

In the West, water issues have long been a part of the political landscape, and in September, the US Representative for Utah’s first congressional district, Blake Moore, and State Senator Mitt Romney, both Republicans and Utah natives, introduced legislation that would see their home state spend $25 million to monitor the water system that feeds the Great Salt Lake.

‘Its water levels are at their lowest in recorded history, leading to a loss of habitat, decreased water flows, and air quality issues,’ Moore said in a press release.

And while climate change is a major driver behind the rate at which the Great Salt Lake is shrinking, human diversion of various tributaries that empty into the lake has also contributed to its diminishment.

Millions of gallons of water are diverted from rivers flowing to the Great Salt Lake each year, for urban, industrial, and farming use. 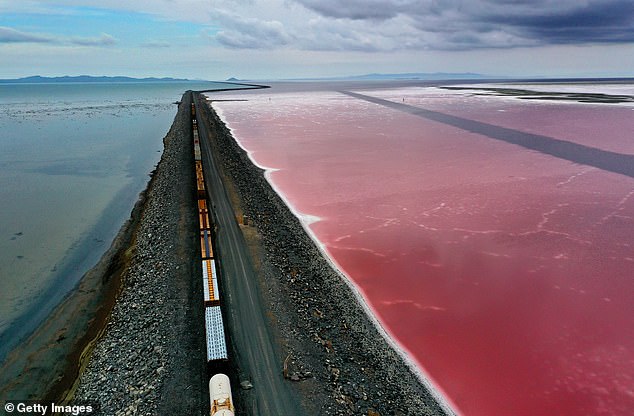 As a result, according to the Tribune, more of the lake’s shoreline is now exposed, threatening the livelihoods of brine shrimp that live in the remnants of the once-great lake – as well as the birds that rely on them for food.

And while the lake’s water itself is not drinkable due to its saltiness, which surpasses that of any ocean, its surrounding ecosystem and overall existence largely benefit neighboring human populations.

The lake-effect snowstorms that Shearer mentioned, for instance, help produce water for much of the surrounding area.

The exposed dry lake, meanwhile, poses a threat to the air quality in neighboring Salt Lake City, situated less than 20 miles away, and is adding more dust into the snowpack, causing it to melt earlier in the year, disrupting the supply of water in the surrounding ecosystem, the report further reveals.

The consequences of these changes are not fully known, but experts and locals alike are adamant that the lake’s ecology is in immediate peril – a sentiment that scientists have long warned of.

‘As we change the climate, we have learned over the last many decades that we are also going to fundamentally change how much water we get and where we get it, the intensity of storms, rainfall patterns, the severity of droughts and floods, the demand for water from crops and from our natural vegetation,’ climate scientist Peter Gleick told Yahoo News earlier this month.

The governor of the Bee Hive State, Spencer Cox, has also stepped in, to comment on the pressing phenomena during a monthly news conference Thursday, where the Utah politico emphasized the lake’s importance and previewed upcoming legislation aimed at conserving its water.

‘It’s not just the Great Salt Lake. It’s the Colorado River Basin, it’s all our lakes and streams and [water] storage capacity in the state.

‘This is an all-hands-on-deck issue.’