“Time and time again, I felt it was my duty to cover up his dirty deeds, rather than listen to my own inner voice and my moral compass,” Cohen said.

Cohen made his case for leniency in front of a federal judge in Manhattan, accusing Trump of causing him to err.

“It was my own weakness and a blind loyalty to this man that led me to choose a path of darkness over light,” he said.

“I have been living in a personal and mental incarceration ever since the day that I accepted the offer to work for a real estate mogul whose business acumen that I deeply admired,” he said.

Speaking directly of Trump, Cohen said, “There is little to admire.” 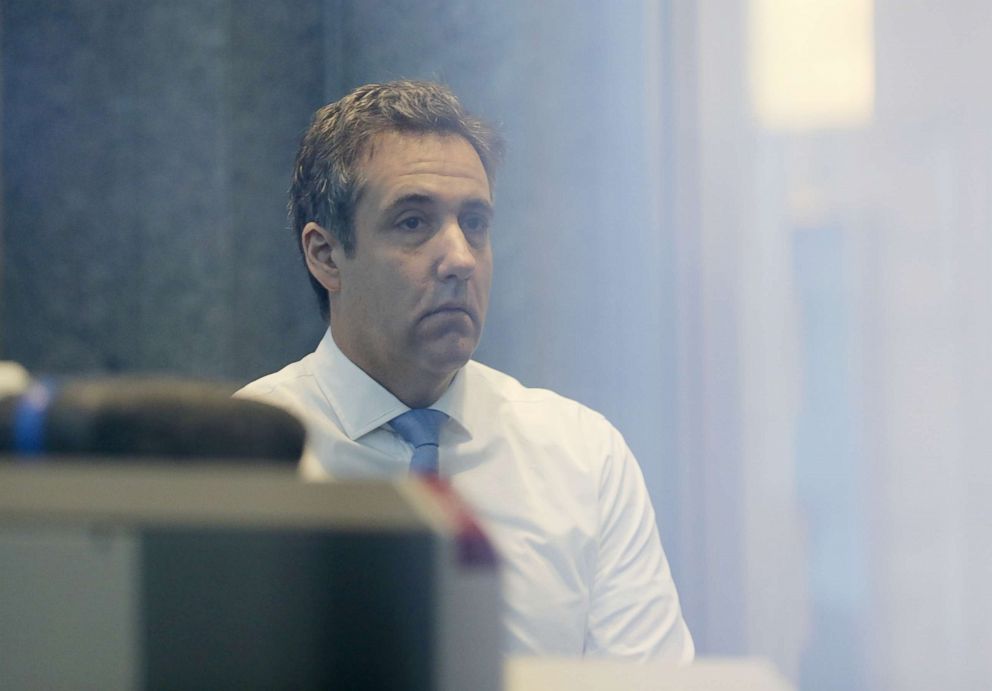 Cohen was sentenced to three years in prison for crimes including campaign finance violation, tax evasion and lying to Congress.

“I stand before your honor humbly and painfully aware that we are here for one reason,” Cohen said. “Today is the day that I am getting my freedom back.” 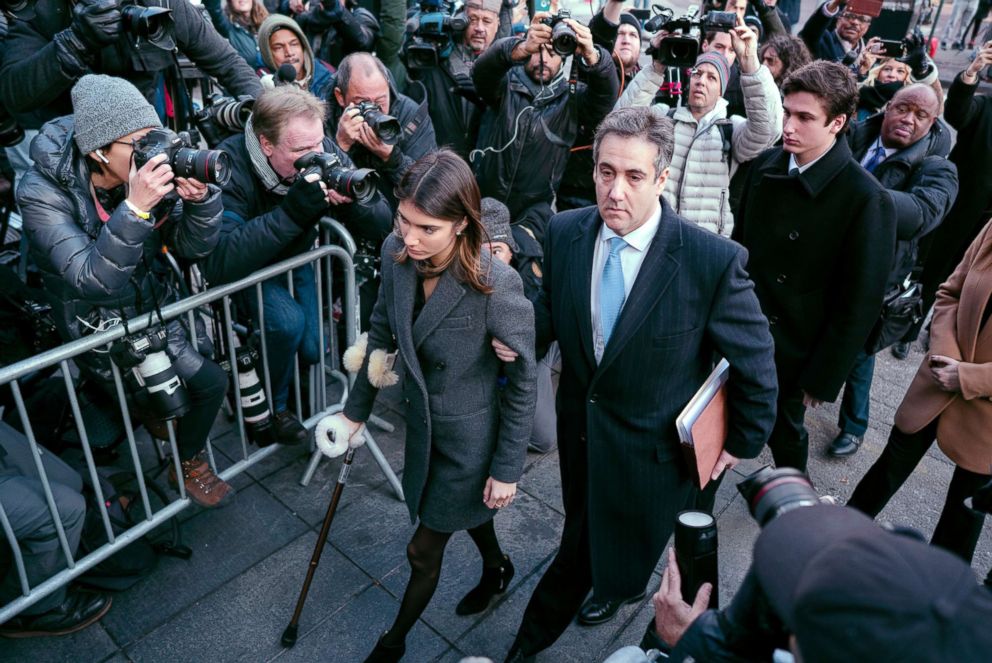 Cohen also made clear he is no longer a loyal soldier of the president’s, saying he is determined to make sure “history won’t remember me as a villain of his story.”

He also apologized to the people of the United States, saying “they deserved to know the truth and lying to them was unjust.”

At one point Cohen turned toward his parents. “I’m sorry,” he uttered.

That was one of only two times that he turned around from the podium to look at his legal team and relatives. The other instance came when he described strangers writing letters to him expressing their support.

When he sat back down he touched his daughter Samantha’s shoulder. Samantha Cohen, who was using a cane because of a recent surgery, was loudly weeping after the hearing ended, and her father was seen consoling her. His son Jake was also seen crying, along with Cohen’s wife who was sobbing.

He also owes $1.39 million in restitution plus $500,000 in forfeiture for the financial and campaign finance crimes. He is required to report to prison on March 6, 2019.

Thank you, your Honor.

I stand before your Honor humbly and painfully aware that we are here today for one reason: Because of my actions that I pled guilty to on August 21, and as well on November 29. I take full responsibility for each act that I pled guilty to, the personal ones to me and those involving the President of the United States of America.

Viktor Frankl in his book, “Man’s Search for Meaning,” he wrote, “There are forces beyond your control that can take away everything you possess except one thing, your freedom to choose how you will respond to the situation.” Your Honor, this may seem hard to believe, but today is one of the most meaningful days of my life. The irony is today is the day I am getting my freedom back as you sit at the bench and you contemplate my fate. I have been living in a personal and mental incarceration ever since the fateful day that I accepted the offer to work for a famous real estate mogul whose business acumen I truly admired. In fact, I now know that there is little to be admired.

I want to be clear. I blame myself for the conduct which has brought me here today, and it was my own weakness, and a blind loyalty to this man that led me to choose a path of darkness over light. It is for these reasons I chose to participate in the elicit act of the President rather than to listen to my own inner voice which should have warned me that the campaign finance violations that I later pled guilty to were insidious. 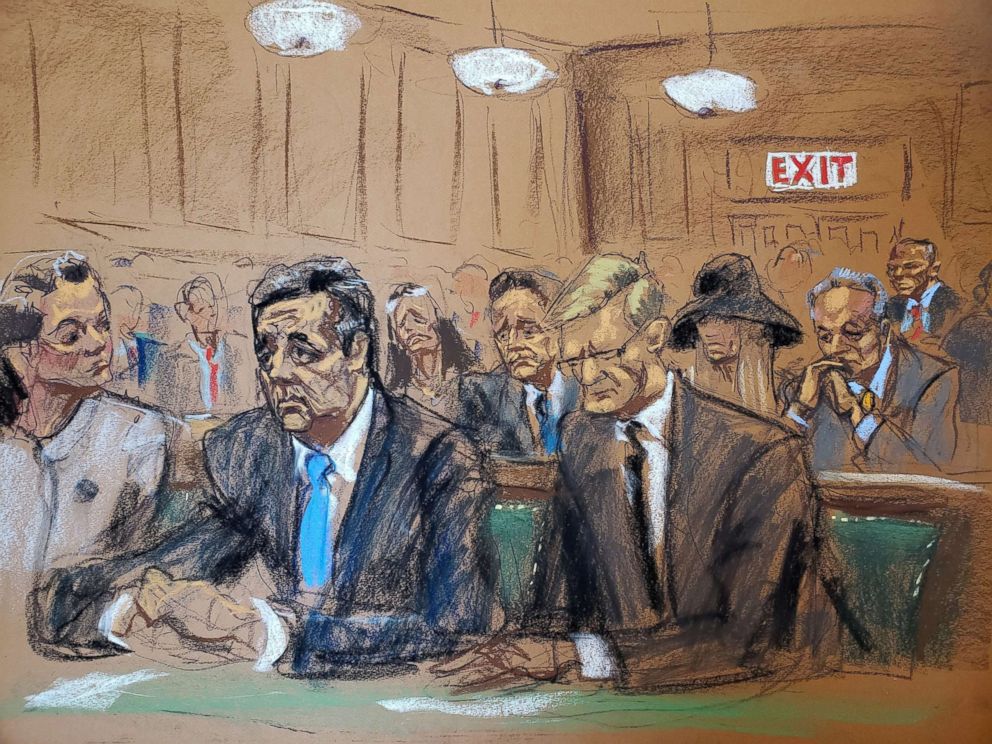 Recently, the President Tweeted a statement calling me weak, and he was correct, but for a much different reason than he was implying. It was because time and time again I felt it was my duty to cover up his dirty deeds rather than to listen to my own inner voice and my moral compass. My weakness can be characterized as a blind loyalty to Donald Trump, and I was weak for not having the strength to question and to refuse his demands. I have already spent years living a personal and mental incarceration, which no matter what is decided today, owning this mistake will free me to be once more the person I really am.

Your Honor, I love my family more than anything in the world: My dad who is here today, my mom, my in-laws, siblings, love of my life, my wife Laura, my pride and joy, my daughter Samantha, my son, Jake. There is no sentence that could supersede the suffering that I live with on a daily basis, knowing that my actions have brought undeserved pain and shame upon my family. I deserve that pain. They do not. I also stand before my children, for them to see their father taking responsibility for his mistakes, mistakes that have forced them to bear a shameful spotlight which they have done nothing to deserve, and this breaks my heart. For me, the greatest punishment has been seeing the unbearable pain that my actions and my associations have brought to my entire family. My mom, my dad, this isn’t what they deserve to see in their older age, especially when as a child they emphasized to all of us the difference between right and wrong. And I’m sorry.

I believed during this process that there were only two things I could do to minimize the pain to my family: Admit my guilt and move these proceedings along. This is why I did not enter into a cooperation agreement. I have elected to be sentenced without asking for adjournment. I have given information during countless hours of meetings with prosecutors that have been cited as substantial, meaningful and credible. I have chosen this unorthodox path because the faster I am sentenced, the sooner I can return to my family, be the father I want to be, the husband I want to be, and a productive member
of society again. I do not need a cooperation agreement to be in place to do the right thing. And I will continue to cooperate with government, offering as much information as I truthfully possess.

I stand behind my statement that I made to George Stephanopoulos, that my wife, my daughter, my son have my first loyalty and always will. I put family and country first. My departure as a loyal soldier to the President bears a very hefty price.

For months now the President of the United States, one of the most powerful men in the world, publicly mocks me, calling me a rat and a liar, and insists that the Court sentence me to the absolute maximum time in prison. Not only is this improper; it creates a false sense that the President can weigh in on the outcome of judicial proceedings that implicate him. Despite being vilified by the press and inundated with character assassinations over the past almost two years, I still stand today, and I am committed to proving my integrity and ensuring that history will not remember me as the villain of his story. I now know that every action I take in the future has to be well thought out and with honorable intention because I wish to leave no room for future mistakes in my life.

And so I beseech your Honor to consider this path that I am currently taking when sentencing me today. And I want to apologize to my entire family for what my actions have put them through. My family has suffered immeasurably in the home and the world outside. I know I have let them all down, and it
will be my life’s work to make it right, and to become the best version of myself.

Most all, I want to apologize to the people of the United States. You deserve to know the truth and lying to you was unjust. I want to thank you, your Honor, for all the time I’m sure you’ve committed to this matter and the consideration that you have given to my future.

Again, I want to thank my family, my friends, many who are here today, who are with me, especially all the people who wrote letters on my behalf. In addition, I would like to thank the tens of thousands of strangers who despite not knowing me at all, not knowing me personally have shown kindness and
empathy in writing letters to me and offering support and prayer. And I thank you, your Honor, I am truly sorry, and I promise I will be better.