Michigan school shooting suspect: Psychologist on what can be learned from his case

Dr. Jeff Gardere, a board certified clinical psychologist and associate professor at the Touro College of Osteopathic Medicine, weighs in on the case of 15-year-old Ethan Crumbley, the Michigan teen suspect accused of killing four students.

A Colorado sheriff’s department caused a stir over the weekend for what many deemed an inappropriate photo: Santa applying for a concealed carry permit.

The El Paso County Sheriff’s Office posted the photo on its Twitter page. A white-haired bearded man decked out in Christmas attire can be seen sitting at a desk. 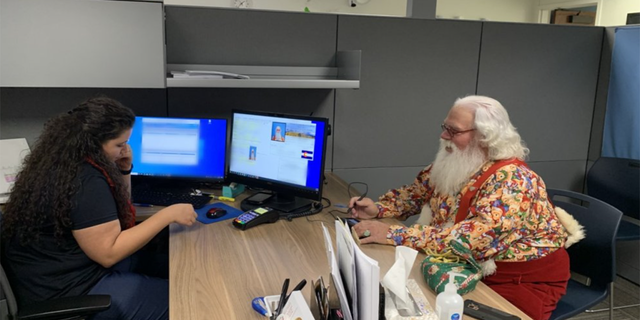 “Guess who came in to receive his Concealed Handgun Permit today?” the office tweeted along with a “Santa” emoji.

The sheriff’s office said it had issued nearly 50,000 concealed handgun permits, with another 2,560 waiting to be issued.

The post caused an immediate backlash, with many pointing out the ill-timing given a school shooting in Oxford, Michigan, just three days prior.

The suspected shooter, 15-year-old Ethan Crumbley, allegedly opened fire, killing four fellow students and wounding six others, along with a teacher. He has been charged as an adult with murder, terrorism and other crimes in the attack.

Oakland County Prosecutor Karen McDonald has also filed involuntary manslaughter charges against Crumbley’s parents, Jennifer and James Crumbley, for their supposed failure to intervene on the day of the shooting despite becoming aware of a drawing a teacher found on their son’s desk that included a bullet and the words “blood everywhere.”

Amid backlash of its “Santa-concealed carry permit” photo, the sheriff’s office said in another tweet that the initial post was not meant to be insensitive, merely to highlight its staff in the Concealed Handgun Permit Office. 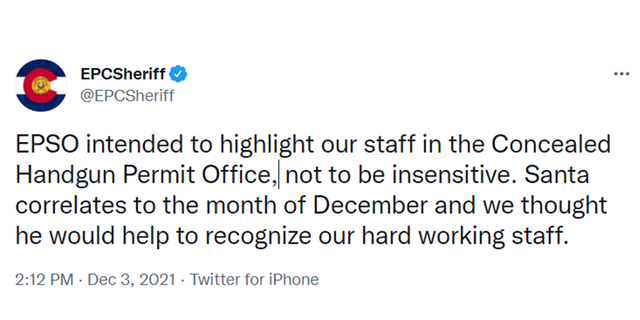 “Santa correlates to the month of December and we thought he would help to recognize our hard working staff,” the sheriff’s office wrote.

But the follow-up post failed to extinguish the anger that the initial post had caused. One Twitter user accused the El Paso County Sheriff’s Office of having “completely missed the mark.”

“[E]specially since the alleged shooter in Michigan was given a handgun as a Christmas present,” the user wrote. “Also, little kids are now wondering why Santa needs to carry a concealed weapon.”

“I’m sitting here in downtown Oxford, MI, waiting for the candlelight vigil to start to pay tribute to 4 students who were murdered by a handgun smuggled into the school,” another user wrote. “But by all means, tell kids Santa carries a concealed weapon.”

Fox News has reached out to the sheriff’s office for additional comment and will update this story accordingly.