A grief-stricken Sam Newman has described the trauma of finding his wife Amanda Brown dead in their Docklands apartment and how he attempted CPR as he waited for ambulances to arrive.

In an uninterrupted and deeply personal message he read out on his You Cannot Be Serious podcast on Wednesday, the football and media figure described feeling “completely helpless” when he came home on Saturday evening. “As I saw her, I knew she was dead,” Newman said. 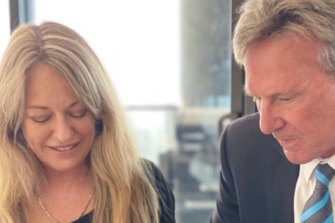 “I had been working on a boat, which Amanda hated, incidentally … and we were going down to get fish and chips to eat for dinner and I thought, Amanda might want to come with us.

“We get down to where we were going, Kippers in Werribee … and I tried to ring her.

He said he and his friends had joked about where Ms Brown was and why Newman was struggling to reach her.

“We were joking about, she might be out at a venue, or at the pub or out with the girls, or doing something and I said, ‘She is probably lying dead up in the flat.’

“So I get home and I walk in the door and the television is on in the bedroom and so I look down there and she is lying there on the tiles outside the laundry … as soon as I saw her, I knew she was dead.”

It was difficult, said Newman, “to describe the feeling of having a triple zero number on speaker phone while the operator took me through the CPR technique, which I continued for a futile 30 minutes while waiting for the ambulance. This is by no means a criticism of the instructions or the time the ambulance took to arrive, but more the desperation of feeling completely helpless as the woman I married six months ago ceased to be.” 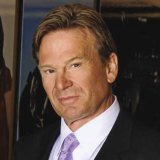 Throughout the short podcast, Newman repeatedly grappled with whether people would be interested in hearing his story, often pausing to reiterate that he did not fully understand why he felt compelled to share the experience.

“So why am I writing this?” Newman asked. “Maybe it’s cathartic, or maybe I want to share what a relationship means to me … at 75 years of age, taken three-quarters of a century to discover the formula,” he said.

Newman, 75, married Ms Brown, his partner of 20 years, at a private ceremony in their Docklands apartment late last year. He briefly reflected on their small wedding.

“On November 25, 2020, she opened a knock on the door, and in the presence of my friend and celebrant Greg Evans, my dear and long-time friend Kevin King, and my eldest son, Jack, we became Mr and Mrs Newman,” he said.

“She was loyal and loving, concerned and protective, astute and as strong-willed as any person I’ve ever met. I will always love her for what she was and who she was.”

In a statement on Sunday, Victoria Police said: “Police will prepare a report for the coroner following the death of a 50-year-old woman in Docklands on Saturday. The matter is not being treated as suspicious.”

After playing 300 games for the Geelong Football Club between 1964 and 1980, Newman has had a lengthy and at times controversial media career.

Ms Brown was Newman’s fourth wife and he has three children: Max, Jack and Jordan.