CORONAVIRUS deaths have gone up for the fifth week in a row – with a 36 per cent rise in the space of seven days, new official figures show.

The number of weekly registered Covid-19 deaths increased by 438 in the week ending October 9, the Office for National Statistics (ONS) said. 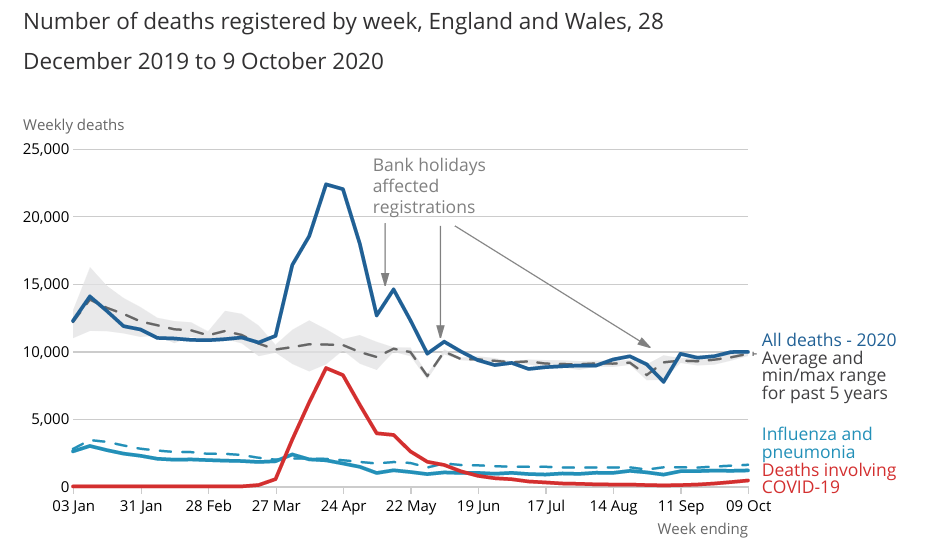 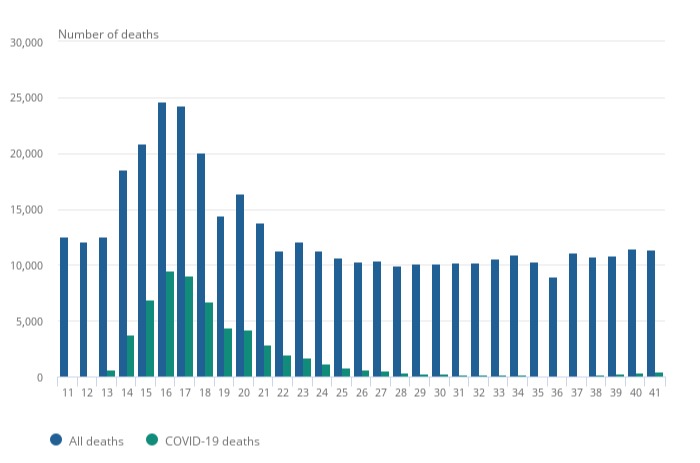 This made up 4.4 per cent of all deaths in England and Wales in the most recent week.

It is the highest number of registered deaths involving Covid-19 since the week ending July 3.

In the previous week, up to October 2, there were 117 deaths.

Figures from the ONS show that, since the week ending September 4, registered coronavirus deaths have been roughly doubling every fortnight.

The number of Covid-19 registered deaths increased in Wales and in all English regions except the East and the South East. 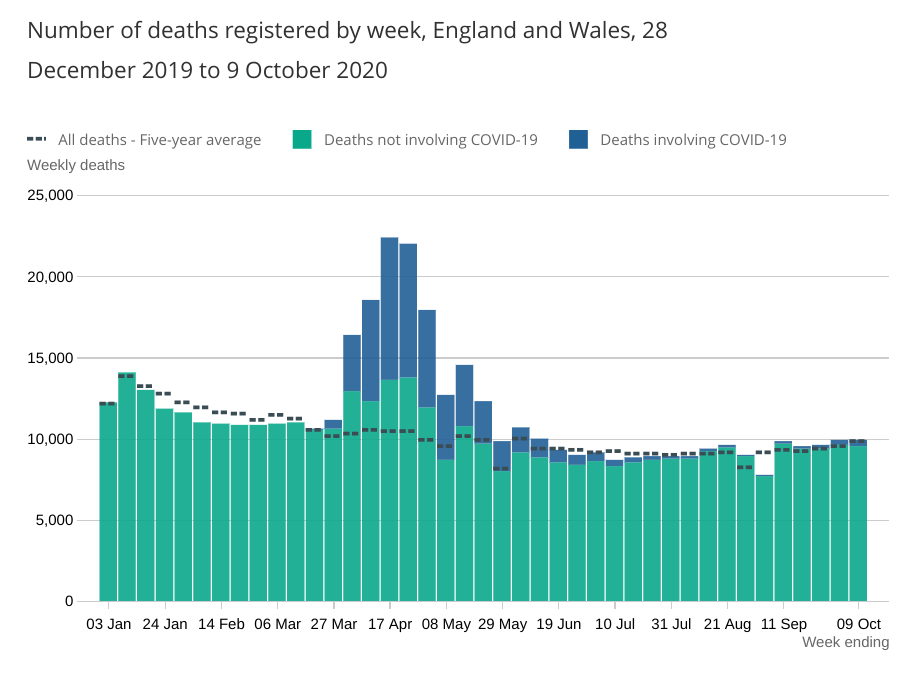 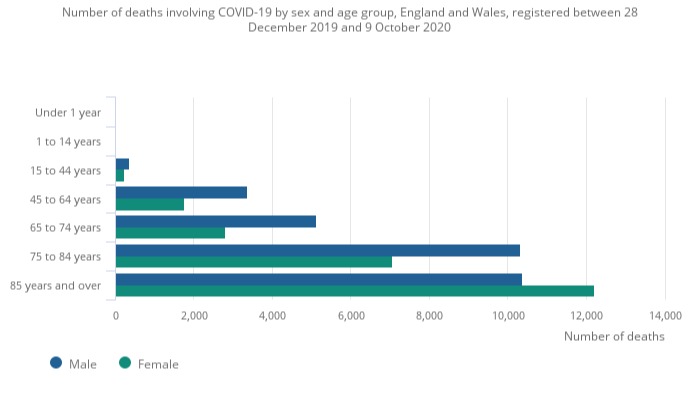 The North West saw the largest number of coronavirus deaths registered – 153, or 35 per cent of the total, and the largest weekly increase (47 deaths).

It is the highest number for the region since the week ending June 12, according to the ONS.

In the North East, 60 Covid deaths were registered in the week to October 9, which again is the highest for the region since the week to June 12.

In London, the South East, the South West and the East, the overall number of deaths was below the average over five years for this period.

Of the 438 deaths, the majority occurred in hospitals (342), with 63 taking place in care homes, 28 at home, three in hospices and two elsewhere. 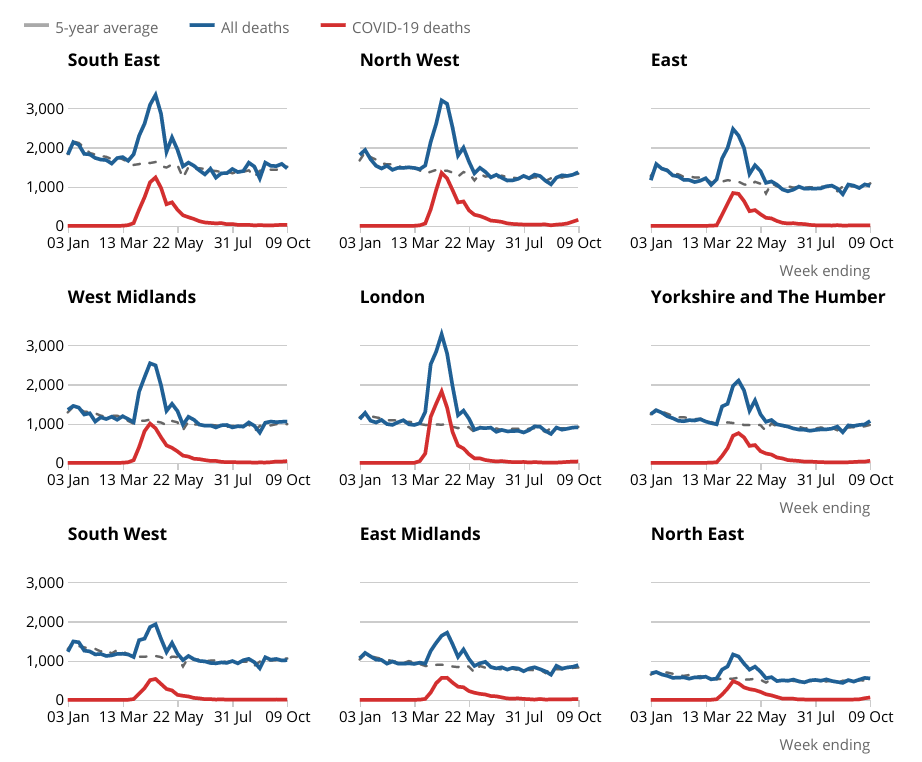 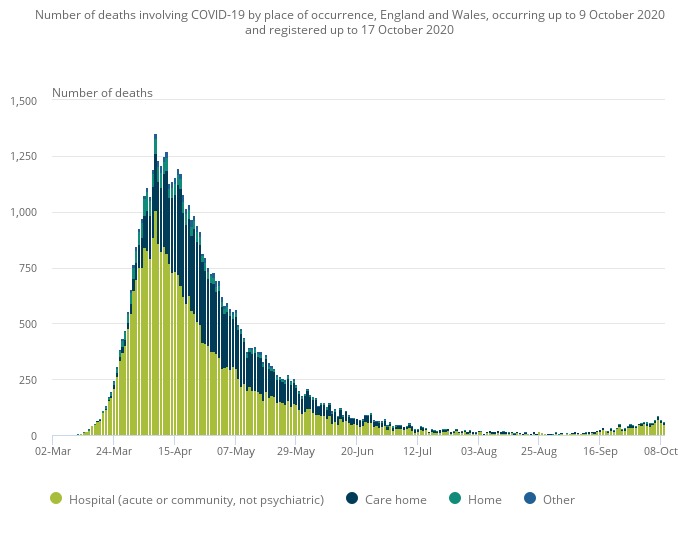 Today's figures show that just over 59,000 deaths involving Covid-19 have now been registered in the UK.

Some 53,863 deaths involving Covid-19 have occurred in England and Wales up to October 9, and were registered by October 17.

Together, these figures mean that so far 59,079 deaths have been registered in the UK where Covid-19 was mentioned on the death certificate, including suspected cases.

The Government threatened to impose stringent restrictions on the region if an agreement was not brokered by midday on Tuesday.

Greater Manchester mayor Andy Burnham earlier suggested he would make a last-ditch bid with other civic leaders for more financial support ahead of the deadline.

Ministers are said to have offered £22 million to the region, equivalent to £8 per capita, with "additional support commensurate" with that offered in Lancashire and the Liverpool City Region.

Mr Burnham and other local politicians have been resisting pressure for the region to be moved into Tier 3, amid concerns about the impact on the region's economy.

So far, only Lancashire and the Liverpool City Region have come under the tightest restrictions in England, in each case with the agreement of local leaders.

The imposition of Tier 3 controls would mean a ban on households mixing, including in private gardens or outdoor hospitality settings, while pubs and bars will be forced to close unless they serve meals.