Coroner demands answers for ‘glaring failure’ that sent paramedics to wrong address that was 270 miles from where father, 46, had taken fatal overdose, inquest hears

A coroner has demanded answers after an ambulance was mistakenly sent to an address hundreds of miles away from where a father had taken a fatal overdose.

Professor Philip Bean called 999 to report that his son Ian Bean’s was dying, an inquest heard.

But despite requesting help be sent to Ian’s home in Liskeard, Cornwall, an ambulance arrived at his father’s property in Nottingham – 270 miles away. 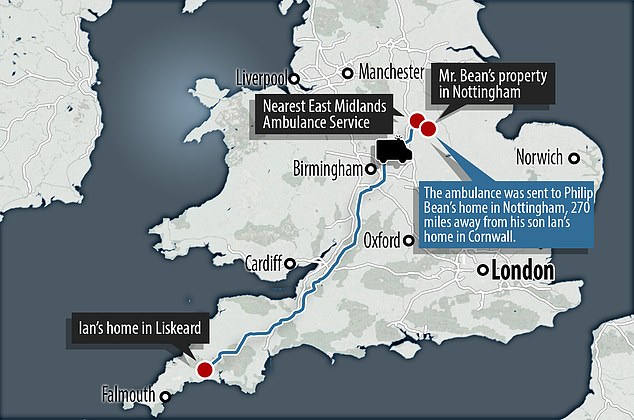 Professor Philip Bean called 999 to report that his son Ian Bean’s was dying, an inquest heard. But despite requesting help be sent to Ian’s home in Liskeard, Cornwall, an ambulance arrived at his father’s property in Nottingham – 270 miles away (map shows where ambulance arrived)

By the time paramedics arrived at the right address, Ian, 46, an unemployed father-of-four, was already unconscious and had suffered a fatal heart attack in his bedroom.

The coroner said the ‘glaring error’ had no effect on the outcome, but he has now written to the ambulance service to seek assurances it will not happen again.

The inquest in Truro, Cornwall, heard that following a ‘difficult sequence of events’ at the family home, Ian rang his estranged adoptive father, Prof Bean, in Nottingham.

Prof Bean, a criminologist, told hearing on Tuesday he rang him blaming him as one of the reasons for the predicament he found himself in.

He said: ‘He told me he had taken an overdose of morphine and was dying. The call was to accuse me of failing him and that I was the cause of his death. 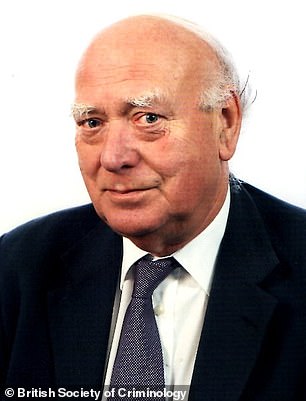 He added: ‘Mistakes were clearly made because the ambulance turned up at my house.

‘It was such an elementary mistake to make. An ambulance crewman said there had clearly been a mistake and they would deal with it.’

Ian was later found unconscious by police and paramedics and had a fatal heart attack in his bedroom soon after they arrived.

Andrew Cox, the acting senior coroner for Cornwall, described it as a ‘glaring failure’ by the ambulance service, but said the mistake would not have changed the outcome.

He said he would write to East Midlands Ambulance Service asking it to review its procedure to ensure ‘something like this doesn’t happen again’.

Prof Bean pointed out that it was probably a mistake made by an individual rather than the service itself.

‘That does not matter when it comes to preventing future death regulations are concerned,’ replied the coroner.

Mr Cox found that Mr Bean had died as a result of suicide after overdosing on Oramporph, his morphine medication. The cause of death was given as multi-drug toxicity and pulmonary disease.

Following the inquest, Karen Sullivan, associate director of corporate services at East Midlands Ambulance Service, said it was ‘human error’ but claimed it did not delay treatment.

She said: ‘We would like to extend our condolences to Ian’s family at this sad time.

‘As soon as we received the 999 call from Professor Bean, our control room passed the information to our colleagues at South Western Ambulance Service so that an ambulance could be dispatched to Ian’s address in Liskeard.

‘Due to human error, a second ambulance was accidentally sent to the address from which the 999 call was made. This did not delay getting help to Ian.

‘We will thoroughly review any recommendations made by the coroner and make changes to our procedures where necessary.’