The cost of the cheapest new car in the UK has hit another record high, costing nearly £3,000 more than last year’s most affordable vehicle.

A new Kia Picanto, at a starting price of £11,810, is the cheapest new car for Brits, according to motoring magazine Auto Express.

However, in another example of the rising cost of living crisis, the cheapest model in 2021 was the Dacia Sandero at just £8,995.

The rest of this year’s top five include the Citroen C3, the Dacia Sandero Stepway and the MG3, all at £12,995. 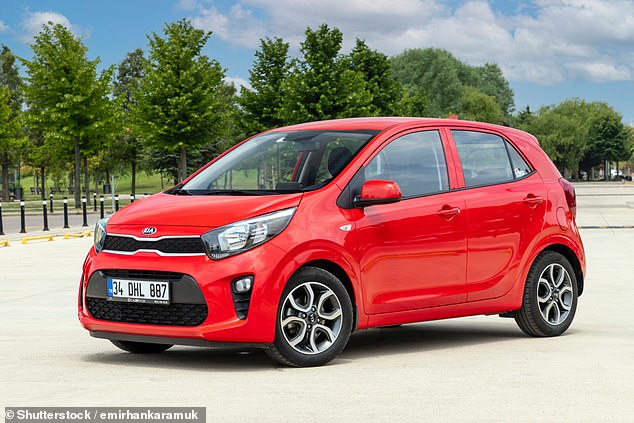 The Kia Picanto, at a starting price of £11,810, is the cheapest new car for Brits, it has been revealed 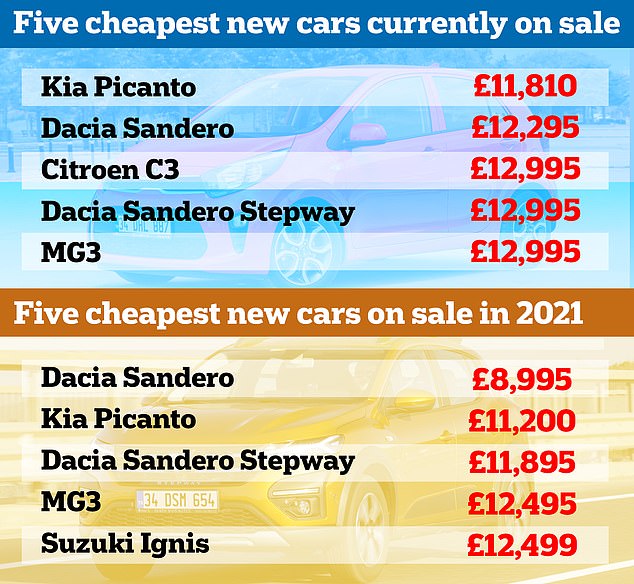 Auto Express reported: ‘Once, not too long ago, if you were looking to buy one of the cheapest cars in the UK, there was an underlying sense of ‘you get what you pay for’.

‘These cars may have looked like a great deal but the cost-cutting was obvious, to say the least. However, times have changed, and you can now look at these motoring bargains using both your head and heart.

‘Sadly, as with many things, the cost of buying a new car has increased over time. The cheapest new cars today begin at around the £11,500 mark, so if you’ve got a tighter budget than this, you may be better off looking for a used car.’

It added: ‘Of course, if your negotiation skills are top-tier you may be able to haggle this price down further. What you should remember, though, is that cars in this price bracket should come with a different set of expectations.

‘They’ll get you from A to B for sure, but will they be as economical, practical, or well-built as something that costs a few grand more? There’s no guarantee.’

Other makes and models under £15,000 new include the Citroen C3, the Hydundai i10 and Fiat Panda, cars that parents often consider for teenage children who have just passed their test.

But, said Auto Express, while the price tag is attractive, entry levels of popular models come without many of the extras motorists want along with less power in the engine and a more ‘downmarket’ trim than other versions.

A used model may have some miles on the clock but for a similar price has those extras, engine and trim though a brand new car will also have a full warranty and potentially better loan deals for those who do not have all the cash up front.

The report added: ‘Many people will rather sink their cash into an apparently better car with a few thousand miles on the clock but the appeal of a brand new model with a full warranty and finance facilities not always open to used car buyers is still strong.’

However, motorists are also facing a massive used car premium with some second hand vehicles costing £26,000 more than a brand new model.

Ongoing shortages in the supply chain coupled with the spiralling cost of living crisis has seen the price of used cars rocket. 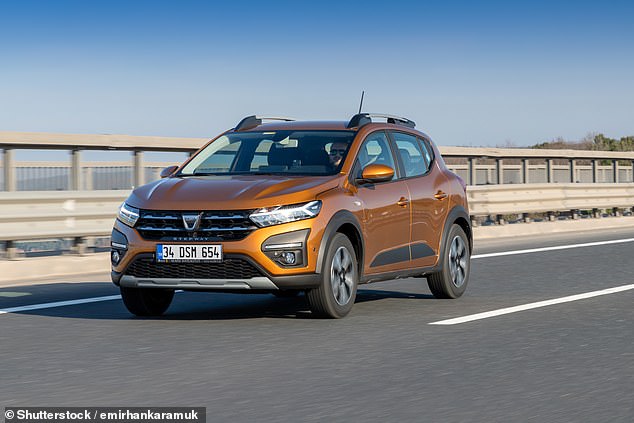 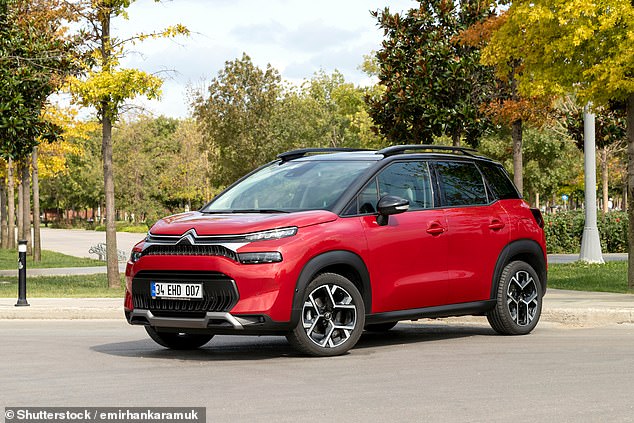 The rest of this year’s top five include the Citroen C3, the Dacia Sandero Stepway and the MG3, all at £12,995

A nearly new Landrover Defender with a list price of £62,000 will cost £10,000 more if the car is second and car relatively low mileage. This is especially true if the car is bought using a PCP plan, which are affected by changes in the interest rate.

The Bank of England’s monetary policy committee has indicated that interest rates will have to rise further in order to counter the threat of runaway inflation despite the very real threat of the country moving into recession.

Also, manufacturers have said that the supply of microchips used in onboard computers and vital safety systems are in incredibly short supply since Covid-19.

Under normal market conditions, a second hand car will lose a considerable percentage of its value as soon as its front wheels hit the tarmac outside the dealership.

According to the Telegraph, interest rates on New cars have shown a slight decline from 4.7 per cent to 4.3 per cent. Those availing of specialist finance deals for second hand vehicles have seen rates increase from 7.69 per cent to 7.85 per cent. New car buyers, however can face long waiting lists before they can sit into their vehicle.