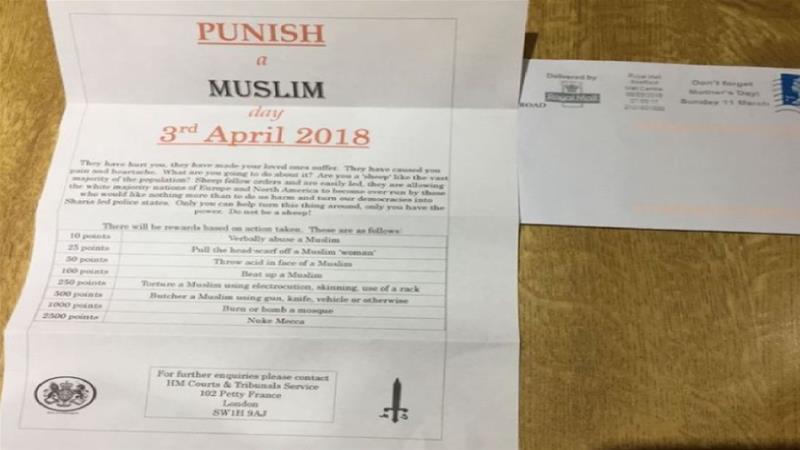 Counterterrorism police in the UK are investigating a possible hate crime after several people received letters calling on them to attack Muslims on April 3, termed in the leaflet as “punish a Muslim” day.

Several Britons in London, the West Midlands and Yorkshire said they received the printed letter through the post, according to reports.

Some uploaded images of the document on social media.

The leaflet says: “They have hurt you, they have made your loved ones suffer. They have caused you pain and heartache. What are you going to about it?”

It goes on to offer rewards for attackers, from 10 points for verbally abusing a Muslim and 50 points for throwing acid in the face of a Muslim, to 1,000 points for bombing a mosque and 2,500 points to “nuke Mecca”.

There are more than 2.5 million Muslims in Britain, where Islam is the second-largest religion.

On Saturday, West Yorkshire police joined London’s Metropolitan Police in attempting to “catch the person or persons responsible for this”.

“Public safety remains our priority and I would urge our communities to be vigilant but not frightened,” West Yorkshire police said in a statement. “We are stronger when we stand together as one and will not be divided.”

“[The matter] is being treated with the utmost seriousness,” the organisation said.

“It is essential that all letters and envelopes are kept and handled minimally to preserve evidence for the police to investigate,” the monitor said, advising recipients.

‘Reflective of hate against Muslims’

“This vile letter campaign sent to Muslims across the UK has caused deep distress and alarm. We welcome the action being taken by the police to investigate this matter,” Miqdaad Versi, assistant secretary-general of the Muslim Council of Britain, one of the UK’s largest Muslim umbrella organisations, told Al Jazeera.

“Sadly, it is reflective of hate against Muslims which continues to manifest itself alongside the rise of the far right. Our elected officials need to stand up and take action against Islamophobia in the same way they have taken action to counter bigotry against other groups,” Versi added.

Jess Phillips, Labour Party MP for Birmingham Yardley, said: “This is utterly unbelievable, if any of my constituents have received them please get in touch.”

“Understandably, this is very distressful, not only those who have received the letter, but also for the wider communities,” said Naz Shah, MP for Bradford West in West Yorkshire.

The head of counterterror policing in the northeast of England, Russ Foster, “has provided reassurance that a thorough and professional investigation is well under way and urges any further victims receiving any such communication to report the matter to the police”, Shah said.

The Church of England’s head of interfaith relations, Andrew Smith, tweeted: “Angry to hear about appalling ‘punish a Muslim’ letters that have been sent. Can’t imagine how horrible & frightening it must be to get a letter like that. Time to redouble our efforts to build peace in our society & support those feeling scared or intimidated. The work goes on.”