Labor MP Kat Theophanous has won a bid in the Supreme Court to stop a council from removing her campaign material in Northcote, while her father was filmed getting into heated exchanges over how-to-vote cards with Liberal volunteers.

Justice Tim Ginnane ordered the Darebin City Council on Wednesday to not interfere with signs promoting Theophanous after eight billboards at four locations were removed, actions the MP had previously claimed were politically motivated and driven by the Greens. 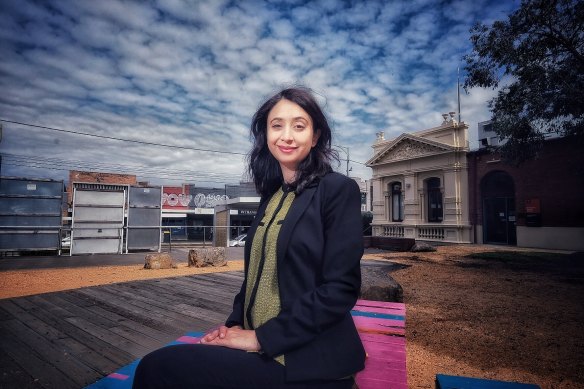 Theophanous’ staffers had reported the disappearance of the signs to police before discovering they had been taken to a tip in Melbourne’s north, where two were destroyed.

The court order comes as competition heats up over the seat, which Theophanous is battling to retain after winning it by just 800 votes from now-federal Greens senator Lidia Thorpe at the 2018 election.

Theophanous said he had been encouraging Liberal voters to use “alternative” how-to-vote cards that send preferences to Labor rather than the Greens.

However, he said he had nothing to do with the creation of the leaflets and did not hand them out himself.

“But when a Liberal voter comes through, I encourage them to use the alternative [flyer], which puts the Greens last,” he said.

In the recorded exchange, the Liberal volunteer says: “I’m not dumb, mate. Our ones are authorised by HQ [Liberal headquarters]; you’ve got shitty ones from Doncaster.”

The Liberal Party has directed preferences to the Greens above Labor in every electorate, a move that has outraged some senior Liberals and could deny Labor key inner-city seats such as Northcote and Richmond. 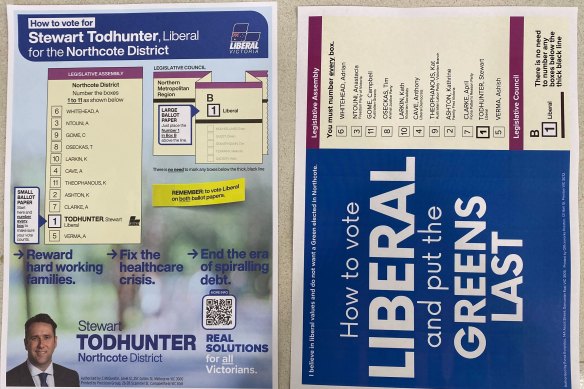 An official Liberal how-to-vote card for the seat of Northcote (left) beside an “alternative” flyer.Credit:David Estcourt

Theophanous said the official Liberal voter cards were “a deceptive way of pushing votes to the Greens” and could determine the outcome of Saturday’s election in the marginal seat.

“The Liberals might get an extremist Green elected over an ethnic woman of Greek background,” he said.

Liberals and, to a lesser extent, Labor Party members have in the past called the Greens “extremist” for having “extreme leftist” views.

The unofficial Liberal flyer, which uses the party’s colours, ranks candidates in the same way except for Labor and the Greens, who are flipped.

“How to vote LIBERAL and put the GREENS LAST,” the unofficial leaflet said.

It was authorised by Evros Evripidou, who lives in the north-eastern suburbs, not in Northcote.

Theophanous and Evripidou are both members of the Cypriot Community of Melbourne and Victoria and know one another.

Evripidou told The Age he was not a Liberal member but supported the party and described the Greens as “the mosquito party”.

“[The leaflets were] designed to help all the parties except the Greens,” Evripidou said.

One of the unofficial how-to-vote cards quotes Opposition Leader Matthew Guy as saying: “Kat Theophanous is a very good MP and I would hate to see her beaten by an extremist Green candidate in Northcote.”

A Labor campaign spokeswoman said last week that the party did not produce or support the distribution of the alternative Liberal how-to-vote card.

Kat Theophanous holds the seat by 1.7 per cent and the Greens are confident of flipping Northcote with candidate Campbell Gome. 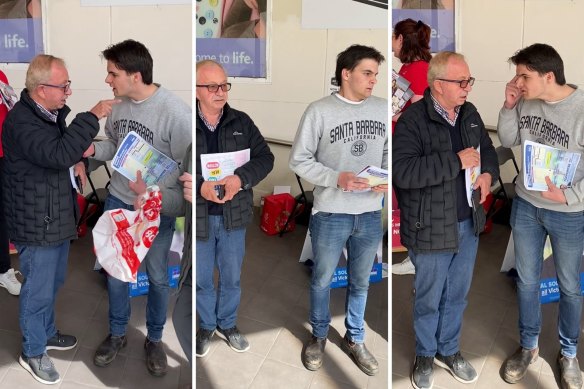 Composite image of Theo Theophanous, the former Member of the Victorian Legislative Council, in a heated exchange with a Lineral Party volunteer over how-to-vote cards in the seat of Northcote.

In court, Ginnane instructed the council to leave the signs in place and not remove them until December 10, after the state election.

“The Darebin Council has a lot of questions to answer including: who authorised the removal of the signs, why wasn’t the Labor campaign notified, and why was it done in the dead of night?”

Victorian Greens leader Samantha Ratnam said her party had nothing to do with the matter.

“When Labor gets desperate, they get dirty,” she said.

Darebin council said enforcement of election laws, including over signage, had no input from elected councillors, and they had agreed not to remove any more signs.