The Australian bull weighed 1212 pounds. Stuck in a paddock, 30 kilometres outside Beijing, it was lonely and fat, reported Margaret Jones in her first dispatch from China almost half a century ago. It was 1973 and the Whitlam government had sent the bull as a gift to the Chinese Communist Party after the two countries established diplomatic relations.

The trailblazing Jones, The Sydney Morning Herald and The Age's first China correspondent, had arrived in the same month to establish the first Beijing bureau for the mastheads. Saber Bogong, the bull, would flourish as Australian-Chinese relations embarked on economic partnership that saw Australian resources fuel China's economy to the second largest in the world within 50 years. 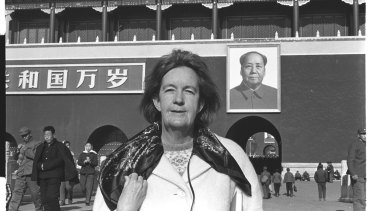 That connection between economic growth and foreign press freedom was severed this week. The last two accredited Australian journalists working for Australian media have left China, forced out after years of rising surveillance, intimidation and harassment. It culminated in the ABC’s Bill Birtles and the Australian Financial Review’s Michael Smith taking shelter in Australian diplomatic missions before being forced to leave on Monday.

Where once being questioned by Chinese authorities was an acceptable occupational hazard, the risk of now being detained for extended periods of time on spurious charges has become palpable. The pair were interviewed over their connection to Cheng Lei, the Chinese-born Australian TV anchor who is now facing national security charges. Both say they have had little to no contact with the Chinese state-TV business reporter. The specific claims against her remain unknown.

"I just think that unprecedented things are increasingly happening there," Birtles said on Tuesday. "And this was part of the reason why there was so much concern. The idea a foreign journalist would be detained [for a long period of time] is unprecedented, and yet there's a feeling that you can't rule out these things happening." 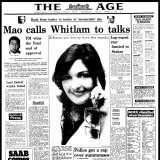 “Mao calls Whitlam to talks”: The front page of The Age on November 3, 1973. Credit:The Age

"It was a small coterie of correspondents and I was always conscious that I was being observed and spied on but I didn't feel as though I was in mortal peril. You collected snippets. Beijing was new and fresh. Just about anything you wrote would demand attention."

Stephen Hutcheon, now a supervising producer at the ABC, arrived in 1995. "It was post-Tiananmen, so there was still a suspicion and distrust of foreign reporters, but what has changed since then is not just the state of the bilateral relationship but also the sophistication of the technology that has allowed Chinese authorities to keep and eye on individuals.

"We were just beginning to have mobile phones in those days. It was old school surveillance, people following you and keeping an eye on you from their cars."

The situation had escalated by the time John Garnaut landed in Beijing in 2007. A rising China had become more sensitive ahead of the 2008 Olympics and surveillance had ramped up. He would end the year briefly detained on the Russian border after reporting on a land dispute, but a more insidious form of influence was also taking root.

The princelings of the Chinese Communist Party were operating outside the state apparatus attempting to gain influence as they jockeyed for position ahead of President Xi Jinping's rise to power.

In the misguided hope that money would win them favours, Garnaut was thrown a red envelope full of cash as the elevator doors closed on his final night in Beijing in 2012. "There is no functional difference between a foreign journalist and a foreign spy," one official told him.

In 2016, at the Hangzhou G20 summit, reporters flown in to cover Malcolm Turnbull's meetings with Xi and other world leaders would recall cameras being set up in hotel lobbies to film their movements and minders rushing into elevators to monitor where journalists were going.

Three years later, Kirsty Needham would be detained and trailed by police who sought to stop foreign reporters speaking to Uighur Muslims in Xinjiang. The same would happen to an LA Times reporter last week in inner-Mongolia, the latest site of a drive to assimilate separate cultural identities under one Chinese banner. 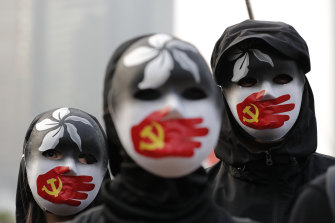 A rally in Hong Kong in December to show support for Uighurs and their fight for human rights.Credit:AP

The incidents, which can appear isolated at first, contribute to a climate of surveillance and influence that make it very difficult to produce journalism that challenges authority. Those that do often have their visas cut off before being told to leave the country. The Wall St Journal’s Philip Wen, a former correspondent for The Sydney Morning Herald and The Age, was among three Journal reporters kicked out in February, his farewell party filmed by a man in a black jacket.

The risks for local news assistants who help correspondents gather stories and Chinese journalists are even greater.

"There is no foreign embassy to come to their rescue," said Elaine Pearson, the Australia Director of Human Rights Watch.

Richard McGregor, a former Beijing bureau chief for the Financial Times and China correspondent for The Australian, said China's Foreign Ministry had been shunted aside as the more hardline domestic public security bureau takes control.

"Earlier on the Foreign Ministry saw value in reporting China's rise, they got their people into other countries and it was important for countries like Australia. When you are calculating the importance of a bigger relationship, these are reasonable trade-offs. But when the relationship has fallen into a hole, none of that matters as much to the Chinese," the Lowy Institute senior fellow said.

"State security in China, like frankly in any other country, takes a much harder line against anything and anybody which they consider is a threat to the core of the system."

Xi used a speech last Thursday marking the 75th anniversary of the end of World War II to make his views on the core clear.

"Anyone or any force that intends to distort and change socialism with Chinese characteristics or deny and deface the great progress that the Chinese people have made in building socialism, won't be tolerated," he said.

The Australian media organisations that for 47 years charted China's rise from Whitlam's gift to economic powerhouse appear to have overstayed their welcome. The Chinese Communist Party's reluctant hospitality has been withdrawn under a cloud of rising diplomatic tensions over the coronavirus, Hong Kong, Xinjiang and the South China Sea.

Hutcheon said it was a tragedy that Australian readers, listeners and viewers wouldn't be able to see China through its people's eyes.

"Not all journalism is conducted by officials. It's not all about surveillance and crackdown," he said.

"What we are missing out on is that person to person contact. Those individual stories of people who struggle to make their way and people who excel. You just can't do that from a distance."

The Sydney Morning Herald and The Age have been waiting since November 2019 for Chinese authorities to approve a visa for Beijing correspondent, Eryk Bagshaw. In July he was advised the visa would not be approved this year due to the coronavirus pandemic.