Revellers enjoying a 24th birthday party in Manchester have sparked outrage after they were filmed drinking, dancing and inhaling balloons in the midst of the coronavirus pandemic.

At least 20 people are thought to have attended a party in the back garden of a home on Saturday night, despite the public being told not to visit other people’s homes.

Sharing the video on Twitter, one shocked viewer wrote: ‘I actually can’t believe what I’m seeing how are people doing this AND posting it all over social media like it’s fine,’ adding: ‘Honestly speechless.’ 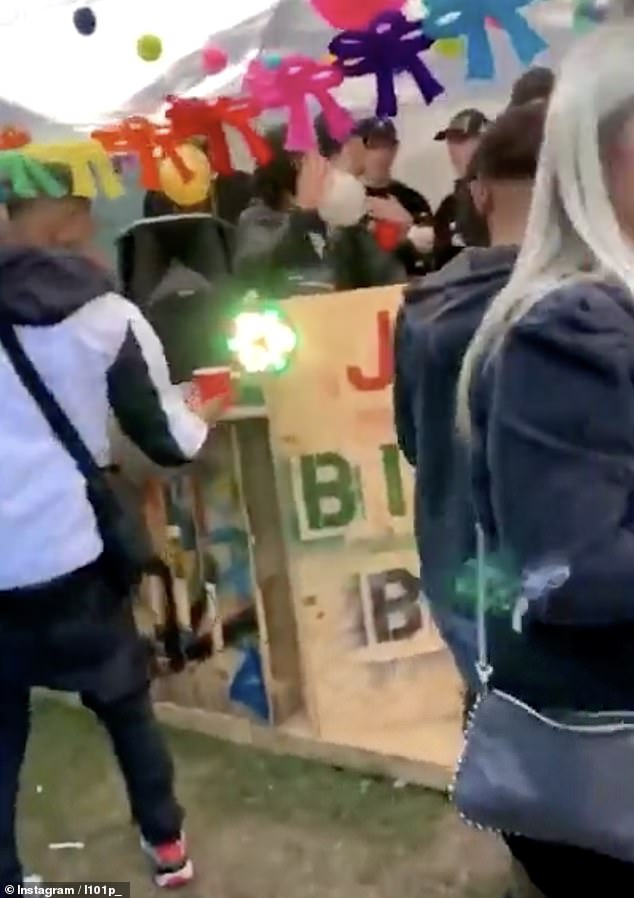 Another Twitter user said: ‘Honestly ridiculous they just don’t care and don’t take no notice…pure ignorance…it only takes one of them to have it then it will become a cluster and yes they will want to rely on the NHS.’

The group were called ‘clowns’, ‘morons’ and ‘totally irresponsible’ by other people as the video gained nearly 340,000 views.

MailOnline has approached Greater Manchester Police for a comment.

Since the video was shared on Saturday, similar footage has emerged from Tower Hamlets in East London. 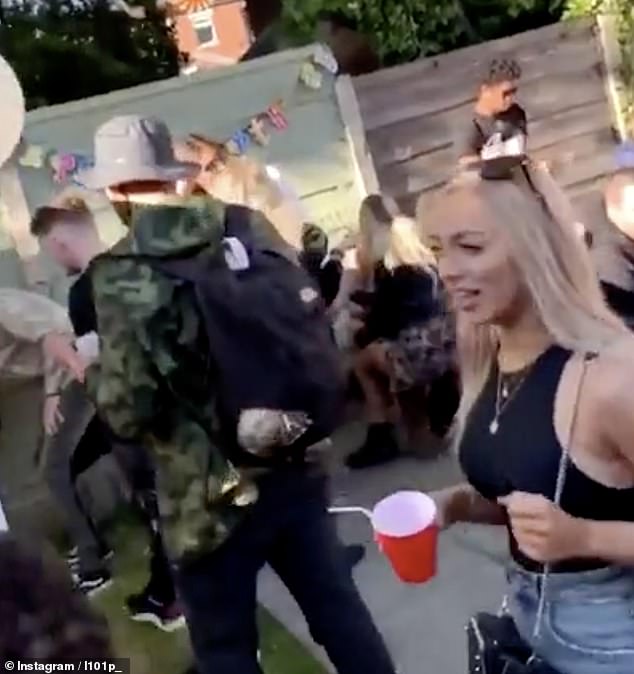 Revellers were seen dancing and drinking at the party on Saturday evening, less than a week after lockdown measures were eased, but Brits were told not to visit other homes 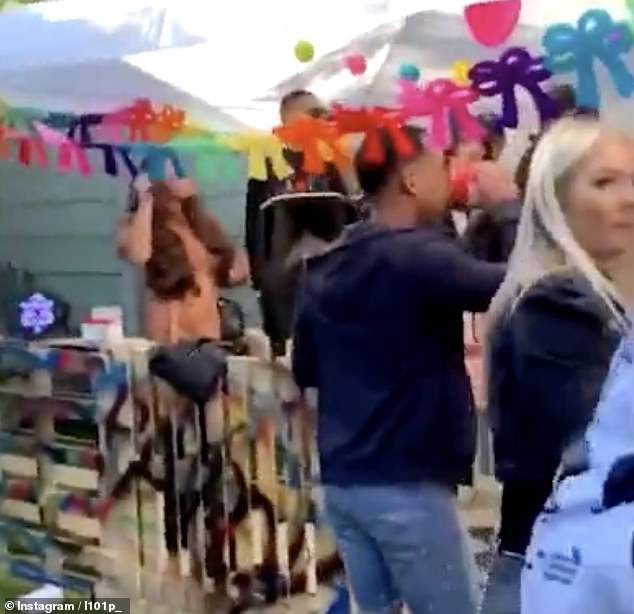 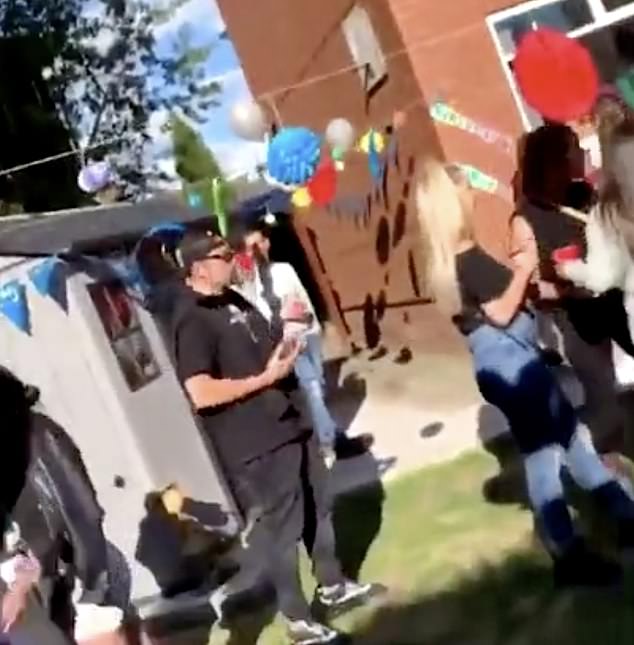 A group of more than 20 people were seen dancing, drinking and having a barbecue in an outdoor basketball court at 8pm on Monday.

The scenes come as the UK continues to control the spread of coronavirus which has now claimed the lives of 34,796 people across the UK.

Footage from the scene showed the group defying the government guidelines by congregating inside the outdoor space and appearing to hold a party. 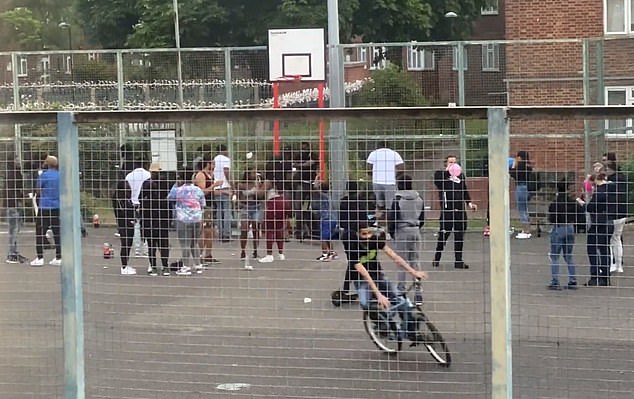 The group of young revellers were filmed flouting social distancing guidelines by gathering in an outdoor basketball court in Tower Hamlets, East London, at 8pm on Monday 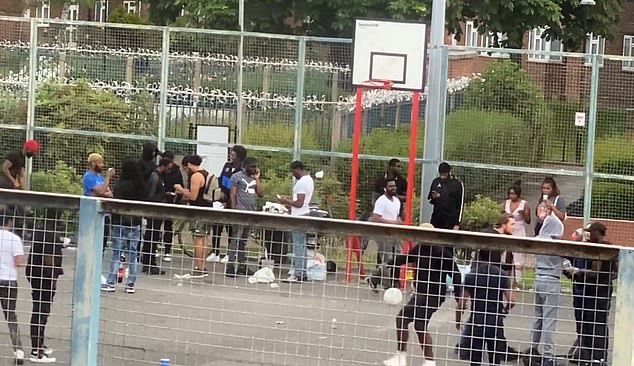 The group could be seen dancing, drinking and having a barbecue inside the court this evening

Some members of the group were seen riding their bikes while others appeared to be inhaling from balloons.

Elsewhere a crate of ice filled with drinks stood in the corner as members of the group continued to socialise.

The scenes comes just days after police in Telford were forced to shut down a 70-person rave at the Granville Country Park in Shropshire.

In a series of tweets, officers explained they were ‘shocked that people would care so little’ about the restrictions on social gathering, which have been in place for weeks due to the pandemic.

The continuing defiance among some Britons to abide by the lockdown measures comes as the government announced on Monday that people should now self-isolate if they lose their sense of smell or taste as it could be a symptom of coronavirus. 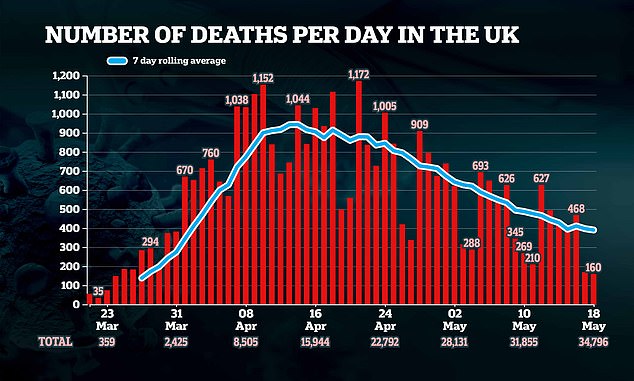 Department of Health chiefs have yet to reveal the final toll, which is likely to be higher. The preliminary tally is calculated by adding up the individual counts of each of the home nations

The announcement signalled the first change to the coronavirus policy since the beginning of the outbreak.

He said: ‘With a cough or fever, sensitivity was around 91 per cent,’ he said in a telephone briefing this morning. By adding anosmia, in terms of case pick-up, we think that might go to 94 per cent.’ 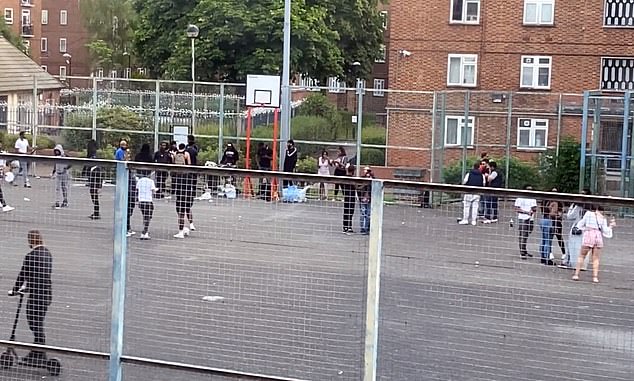 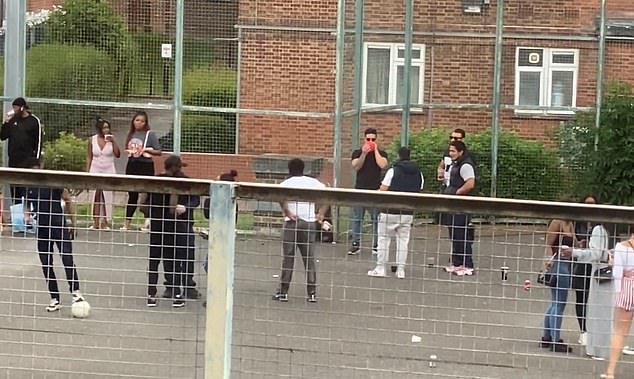 The epidemiologist also admitted that the country may have to ‘live with’ the coronavirus for several years as scientists desperately try to find a vaccine which was ‘capable of suppressing disease levels’.

He said: ‘So from that perspective we may have to live, and learn to live, with this virus in the long-term, certainly for many months to come if not several years.’

He added: ‘One of the things that’s very clear with flu viruses is that they come in our cold winters and the levels of transmission and circulation decline over the summer months.

‘The data we have on other coronaviruses we have looked at very carefully, and it’s not clear that these coronaviruses are as seasonal as influenza.

‘But there may be an element of seasonality and it may well be that the autumn and winter conditions provide a better environment for the virus to then do its work again.’

Yesterday it was confirmed that Britain’s coronavirus death toll was on a downward trend after officials announced 160 more victims.

The daily figure, which was confirmed this afternoon by the Department of Health, is the lowest since March 24 , the first official day of Prime Minister Boris Johnson’s lockdown.

During this afternoon’s daily briefing, Foreign Secretary Dominic Raab also confirmed that the government has now hired 21,000 contact tracers for the UK’s ‘test, track and trace’ plan for easing lockdown. 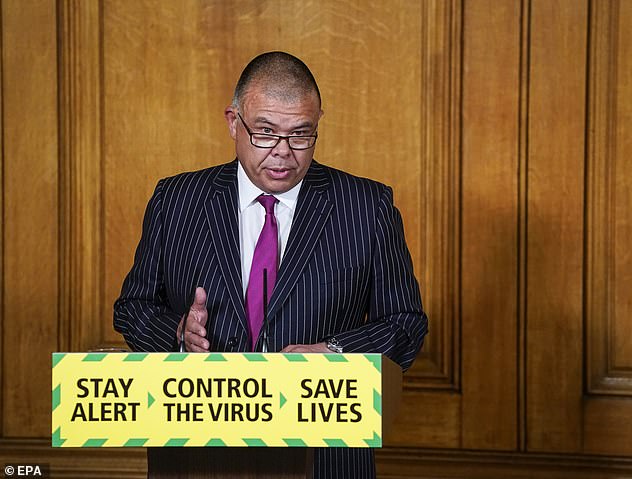