Dashboard footage filmed three cyclists heading towards oncoming traffic after they pedalled the wrong way around a roundabout.

Arkadiusz Gwóźdź was driving a heavy goods vehicle in Portsmouth when he had to stop the cyclists from pedalling into him.

He blasted his horn to stop them and show them they were going the wrong way. 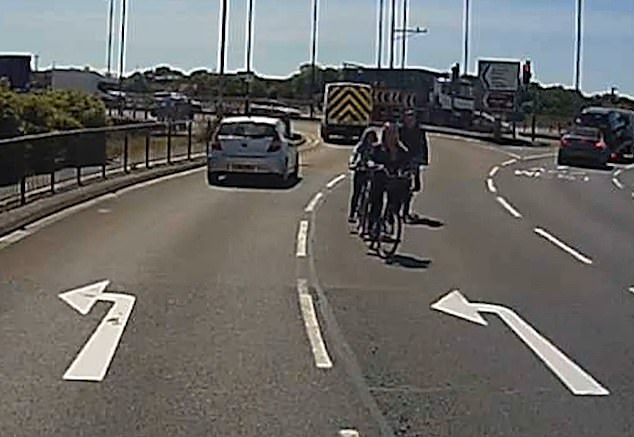 Pictured: Three cyclists in Portsmouth who had gone the wrong way around a roundabout straight into oncoming traffic

‘When I realised that the cyclists were going to cut my path I was thinking about few things at once,’ he said.

Arkadiusz was worried that if he braked hard someone behind would drive into him.

The vehicle was not carrying any load at the time which Arkadiusz thinks is the reason he did not crash into the cyclists.

‘If I was fully loaded I don’t think I would have been able to stop in time,’ he said. 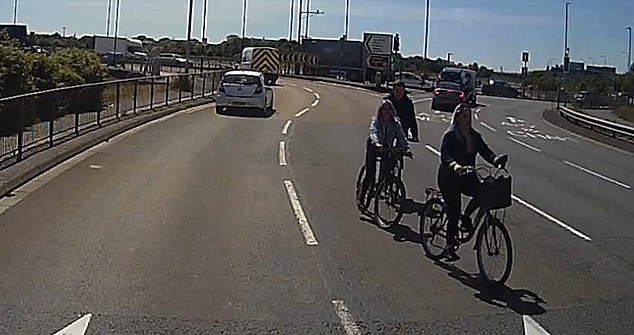 Arkadiusz said he is often in situations where he has to prevent accidents between his vehicle, an articulated HGV, from crashing into other cars.

He said: ‘To be fair it was not as scary for me as it hopefully was for those cyclists.’

By June last year 27,820 people were killed or seriously injured in road accidents, of that 3,790 of those people were cyclists, according to the Department for Transport.