The election campaign has been dominated by the divided island’s suspended peace process and the economy. 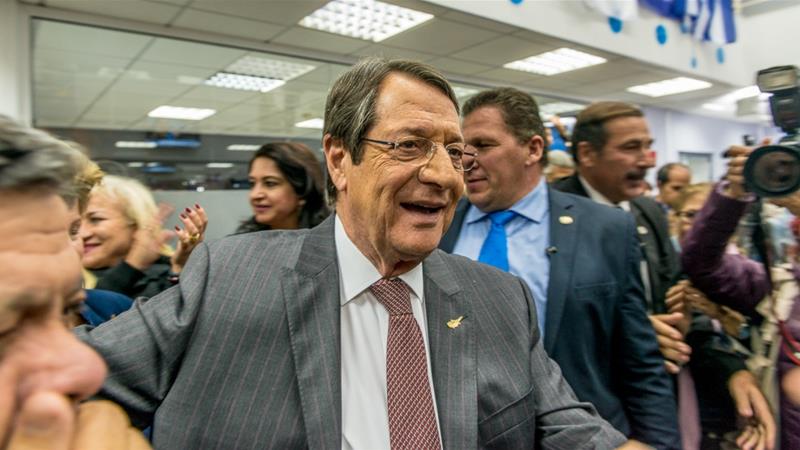 Nicosia, Cyprus – The race for president in the Republic of Cyprus will go to a runoff vote after incumbent conservative Nicos Anastasiades won the first round but failed to muster an outright majority in a poll overshadowed by high abstention.

With all of the votes counted, Anastasiades secured 35.5 percent of the vote on Sunday, ahead of his closest rival Stavros Malas, an independent candidate backed by the left-wing AKEL party, who earned 30.2 percent.

Ahead of the vote, opinion polls had suggested a tight race between Malas and Papadopoulos.

Anastasiades and Malas will now contest the runoff vote on Sunday, February 4, in a repeat of the last presidential elections in 2013. 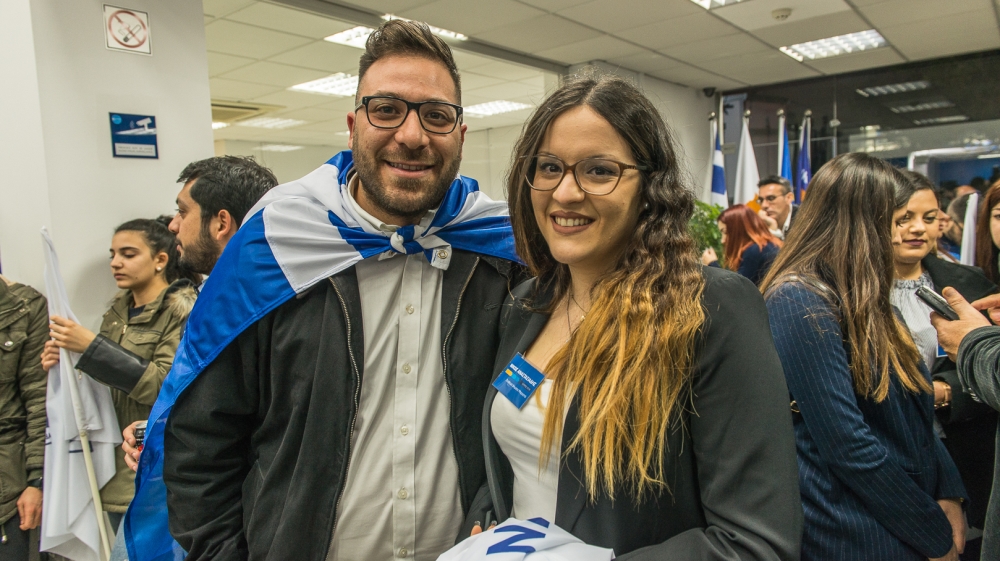 “I’m here to express my gratitude for all your support, so that the people give us a clear mandate that will secure [our victory] next Sunday,” Anastasiades, 71, told the gathered crowd.

Christodoulos, a 26-year-old supporter of Anastasiades, said he was “very satisfied” with the result.

“I hope the same [thing] happens a week from now so that the country moves forward. We don’t want to return to the past,” he told Al Jazeera. “Young people want a modern and unified Cyprus.” 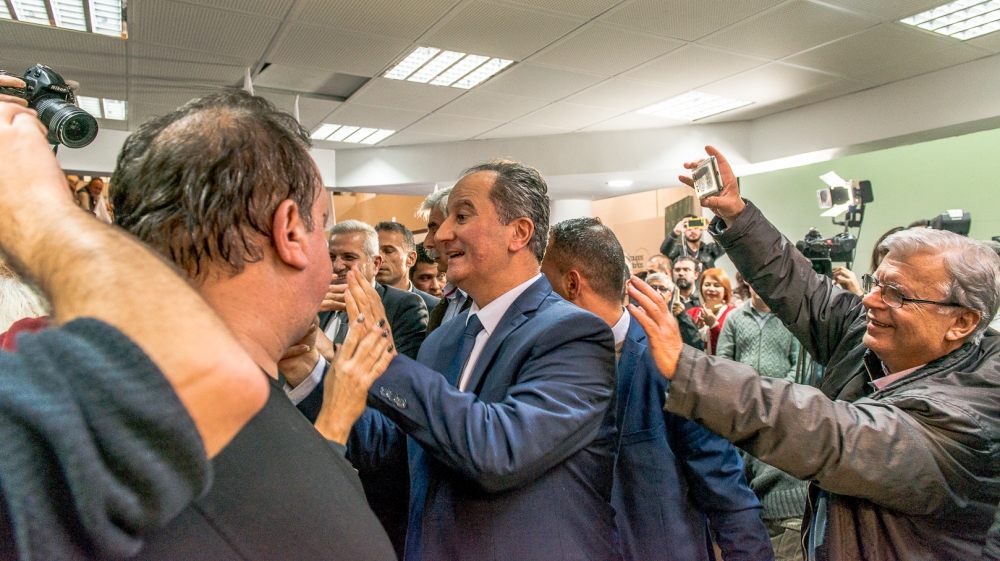 But spirits were even higher a few kilometres further south, at Malas’s campaign headquarters, where hundreds of people of all ages couldn’t hide their enthusiasm.

“The people have spoken,” Malas, 50, told his cheering supporters, waving Cypriot flags. “A new social majority is now expressing its will for a real, creative and hopeful change.”

Andros Ioannou, a 45-year-old psychologist, joined in the jubilation.

“It’s a triumph,” he told Al Jazeera. “Malas, an independent candidate of the left, had five parties against him,” he added.

“If the right political moves are now made in order to convince the rest of the population, then he will be the next president.” 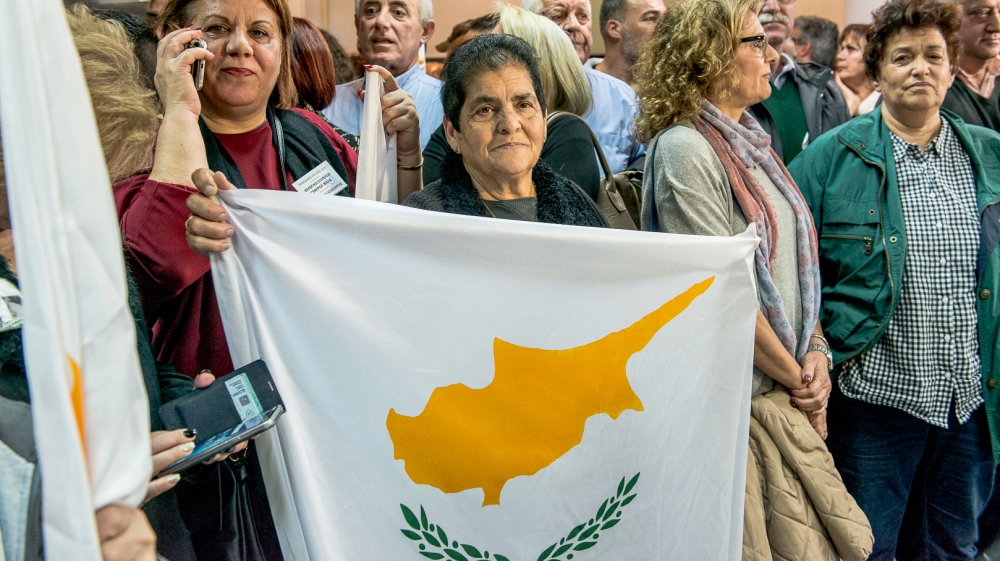 Yet enthusiasm was less palpable outside the venues packed with party faithful.

Christophoros Christophorou, a political analyst based in Nicosia, said the high abstention level signified that “the disengagement of voters had become structural” as frustration over empty promises and corruption grows.

“People also don’t see anything promising for the future in the candidates’ proposals,” he told Al Jazeera.

“There’s no vision – it’s promises and promises offered free of charge, meaning without budgeting and without politicians convincing people that it’s possible to realise what they are proposing.” 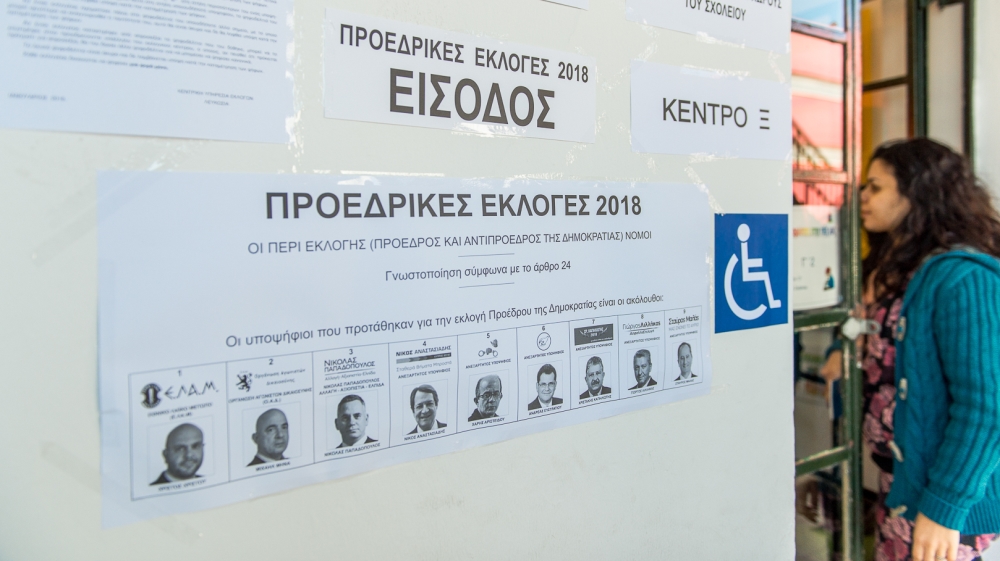 All eyes on alliances

In all, nine male candidates were standing in the presidential race for the five-year presidency.

The top two contenders are now expected to enter into frantic discussions to win the support of the candidates who were knocked out in round one.

“For one to make it to the presidential palace, they need [to form] an alliance in the second round,” said Christophorou.

This, he noted, could modify the frontrunners’ political platforms on a number of issues, including the long-running Cyprus problem.

A small Mediterranean island, Cyprus has been divided along ethnic lines since 1974, when Turkish troops seized its northern third in response to an Athens-inspired Greek Cypriot coup, which aimed at uniting it with Greece.

Unsurprisingly, the presidential election campaign was dominated by the Cyprus problem, especially after the latest round of peace talks collapsed in July 2017.

Both Anastasiades and Malas openly support a solution based on the principles of a bizonal, bicommunal federation (BBF). They say they will seek to revive negotiations if elected, in contrast to Papadopoulos, who put forward a number of prerequisites and conditions to negotiations during the election campaign.

Now, the runoff between Anastasiades and Malas “may mean the resumption of talks will not be delayed”, provided that the Turkish Cypriot side would also be willing to re-enter negotiations, said Christophorou.

“However, things will depend on what kind of alliances we will see,” he cautioned.

“This might influence their positions or their handling of the Cyprus issue.”

Another major issue topping voters’ concerns has been the state of the economy.

In March 2013, Cyprus reached a deal to secure an emergency international rescue package to shore up its ailing banking sector and avert a financial meltdown.

Malas has been criticised for serving as a health minister for 14 months in the 2008-2013 AKEL government, which many Cypriots have blamed for the economic malaise of recent years.

It is widely expected that Malas will announce this week who he intends to appoint as finance minister should he be elected president.