The Daily Mail has never concealed its deep disdain for Emmanuel Macron.

The French president is not only insufferably arrogant and petulant, but he possesses an almost pathological compulsion to stick the boot into Britain.

Yet yesterday we joined the EU in breathing a huge sigh of relief after his election victory. Whatever our misgivings about ‘Le Pipsqueak’, the alternative would have been worse. Much worse.

Leave aside the ugly far-Right extremism of Marine Le Pen’s National Rally party. The fact she wanted closer ties with Vladimir Putin at this of all times made her patently unfit for the Elysee Palace. 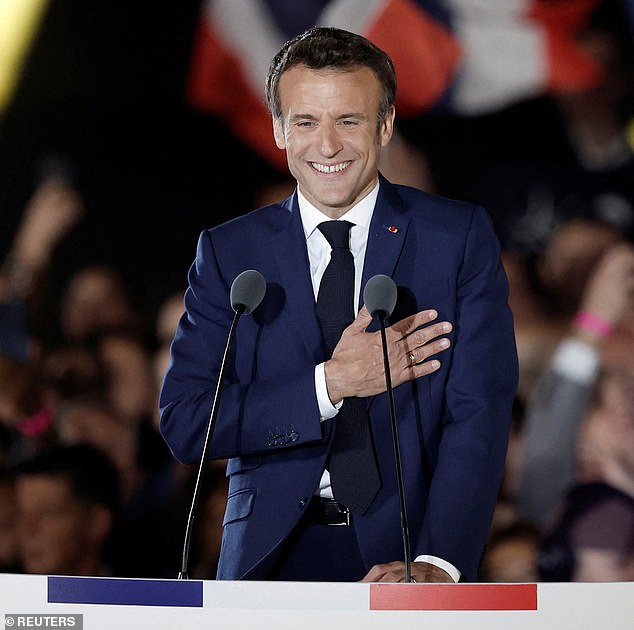 The French president is not only insufferably arrogant and petulant, but he possesses an almost pathological compulsion to stick the boot into Britain

But while Macron won resoundingly, this was in no way a glorious triumph.

With an ocean of abstentions, turnout was lower than in any presidential election for half a century. And that Le Pen’s neo-fascist party could, in a supposedly enlightened Western democracy, bag four in ten votes is truly horrifying.

Likened by some as a political choice ‘between plague and cholera’, the electorate held their noses and plumped for Macron.

What does this mean for Britain?

Anyone expecting a more cordial relationship with France now the president is done electioneering is in for a shock. After all, this is a man whose anti-Brexit hatred led him spitefully to trash the AstraZeneca jab, costing countless lives.

Despite our countries’ shared commercial, diplomatic and security interests, he has refused to pick up the phone to No10.

Instead of delivering ‘Le Snub’, a mature leader would seek a constructive relationship on illegal Channel migrants, fishing rights, Northern Ireland and Ukraine.

That this popinjay president tiresomely refuses shows the relationship will for some time be needlessly rocky.

Treatment equally available to all is a core principle of the NHS.

A patient living in Cumbria should expect the same care standards as one in Cornwall.

Yet when it comes to accessing replacement HRT drugs due to acute shortages, women are enduring a cruel postcode lottery.

Delays in signing off new medications at local level means tens of thousands of women are unable to ease crippling menopause symptoms.

Some are so desperate they’ve resorted to the black market to acquire supplies.

Health Secretary Sajid Javid deserves praise for vowing to bang NHS heads together to solve the crisis. But this should have happened sooner.

Local health chiefs will invariably feel pressure to ration care in an attempt to save money. But when a medical issue affects half the population, treatments must be rubber-stamped nationally.

Will a day go by when we don’t get more disappointing news about the banks slashing customer services?

Not content with shutting thousands of branches, they’ve removed almost a quarter of free ‘hole-in-the-wall’ machines since 2018, says consumer group Which?

As high street lenders seek to swell their vast profits by cutting costs, so countless people are deprived of easy access to their own money.

To the gilded elite of the Square Mile, flashing plastic cards and smartphones in swanky restaurants, banknotes may have gone the way of the dodo. But for millions, especially the elderly and vulnerable, that is a daunting spectre. Many small businesses also rely on cash for their survival.

The banks have fallen back into their old bad habits. If they won’t voluntarily ensure consumers can get hold of their money, ministers must strong-arm them.