Fierce winds of up to 80mph and lashing rain will sweep across the country this afternoon, bringing with it the likelihood of travel chaos and flying debris.

Just days after Britain enjoyed its warmest ever February temperatures and firefighters battled moorland blazes, forecasters warned of towering waves of up to 50ft along the Cornish coast and blizzards in the Peak District and Pennines.

Temperatures are predicted to plummet back to single digits, with a low of minus 1C forecast for remote parts of Northumberland.

‘Be prepared for problems with travel including delayed trains, planes and road journeys, and the risk of coastal and river flooding in the South West.

‘Gusts of up to 80mph are expected, with the strongest winds moving from the South West on Sunday to the North on Monday. There will also be 50mph to 60mph gusts on South East coasts.

‘Snow is a risk early on Monday in the Peak District, Pennines and hills in Wales and southern Scotland.’ 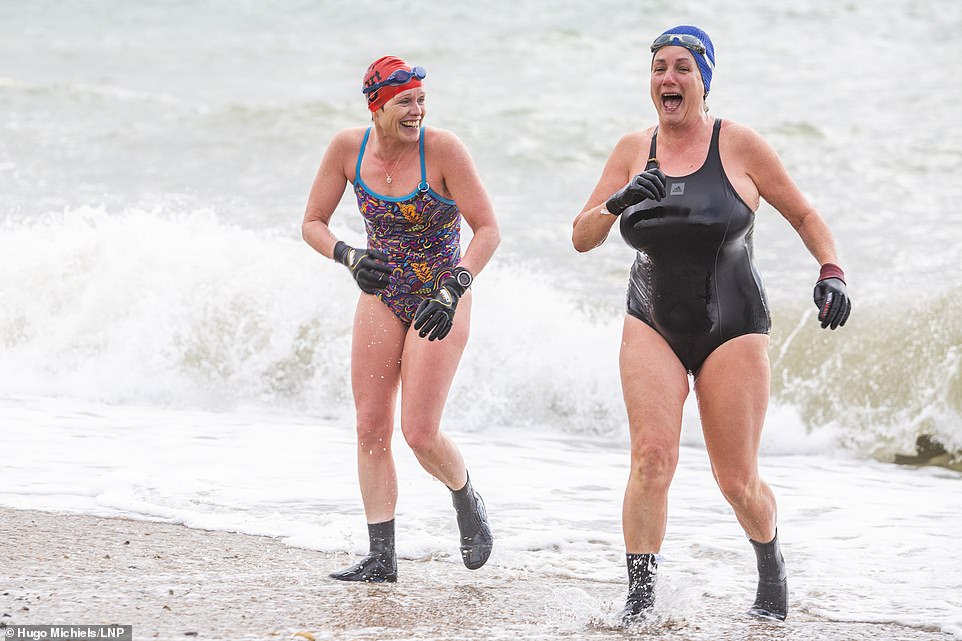 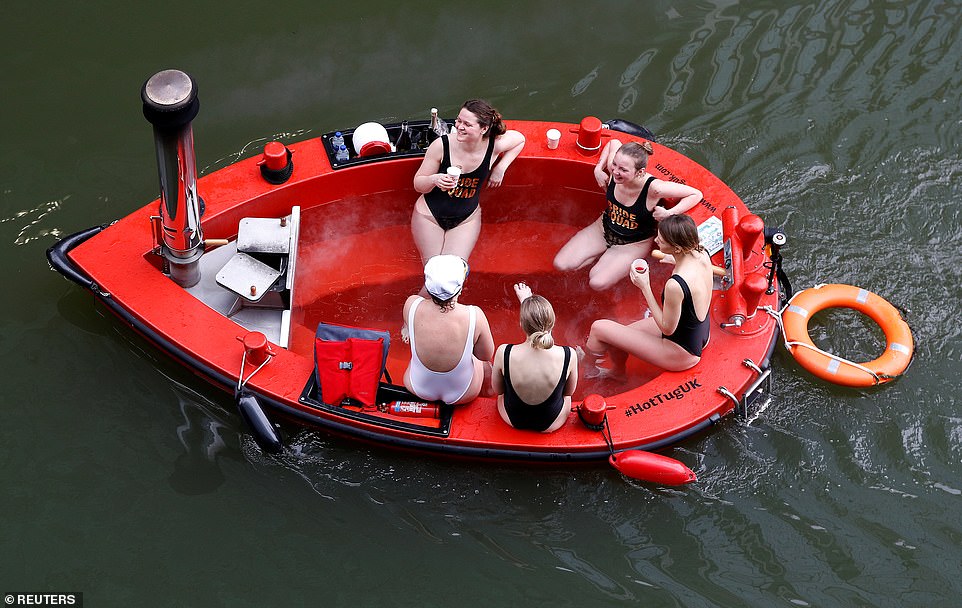 Women sail in a floating electric hot tub on a waterway near the River Thames and Canary Wharf, in London on Saturday afternoon

RAC spokesman Simon Williams warned motorists to take care due to the possibility of fallen trees and branches on roads.

Richard Leonard, head of road safety at Highways England, said: ‘If you do intend to travel, then plan your journey and take extra care, allowing more time.

‘In high winds, there’s a particular risk to lorries, caravans and motorbikes so we’d advise drivers of these vehicles to slow down.’

The ferocious weather will bring very strong winds up from the south west of England, major travel disruption and possibly dangerous conditions when it hits late on Sunday and lasting until early Monday morning.

A yellow weather warning has been issued for large swathes of the country, including much of South-West England, The Midlands and North-East England and will be in effect from 3pm on Sunday to 6am on Monday. 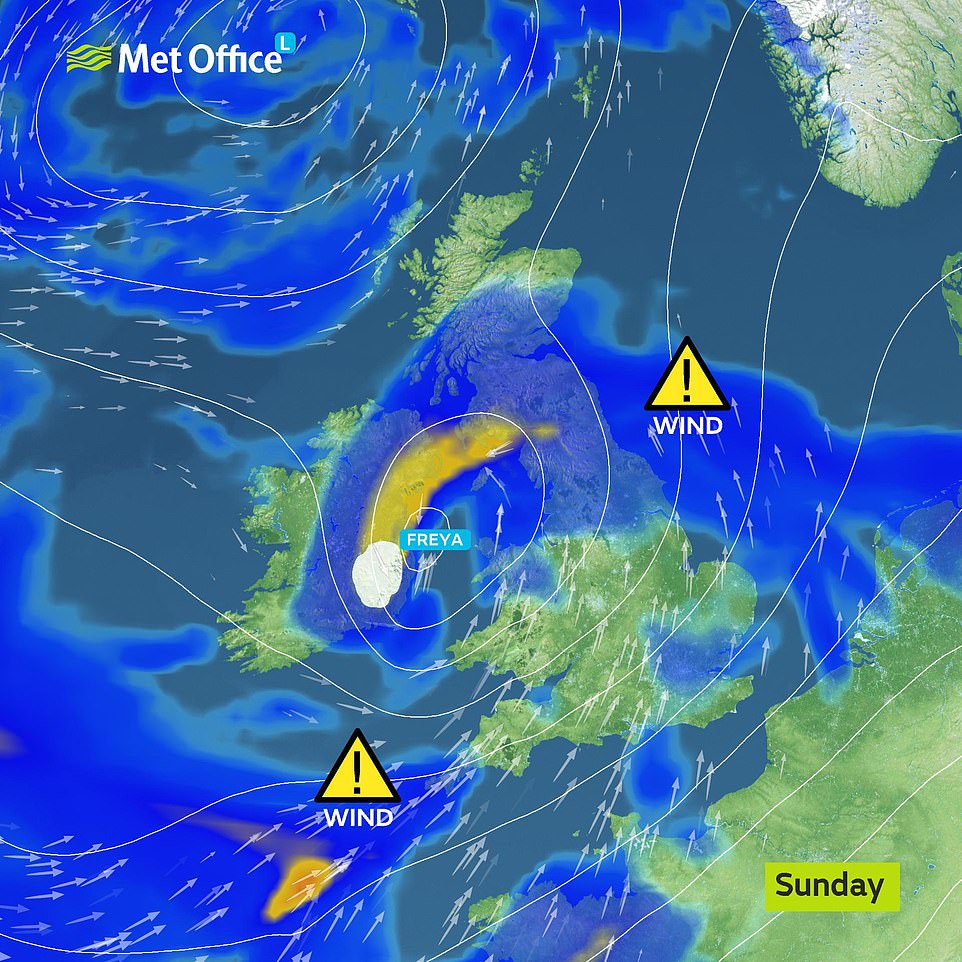 Storm Freya will bring very strong winds, major travel disruption and possibly dangerous conditions when it hits late on Sunday. The Met Office is warning of flying debris, damage to buildings and trees and possible power disruption with the potential to affect other services, such as mobile phone coverage 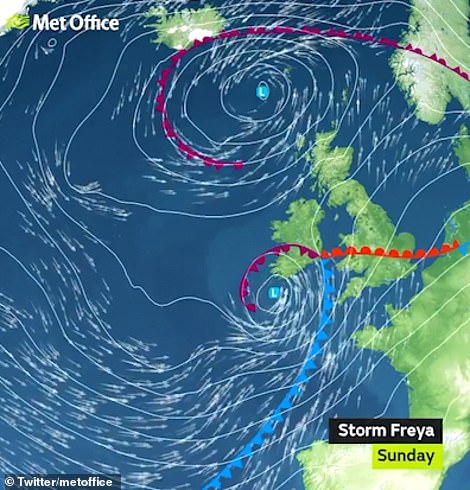 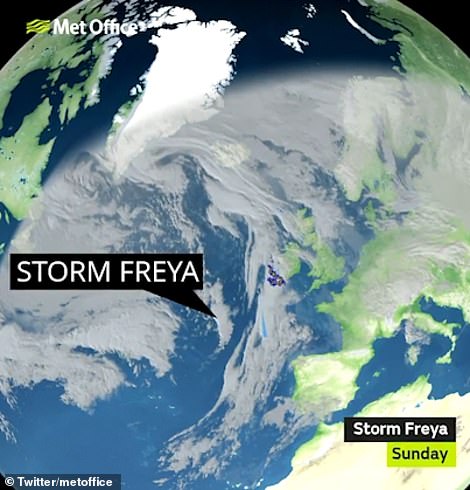 Met Office graphics show the path of Storm Freya as it makes its way towards the United Kingdom. It’s set to hit western parts of the country first, before bringing fierce winds to the Midlands and North-East England. Some snow could also fall on Monday as temperatures drop to single digits 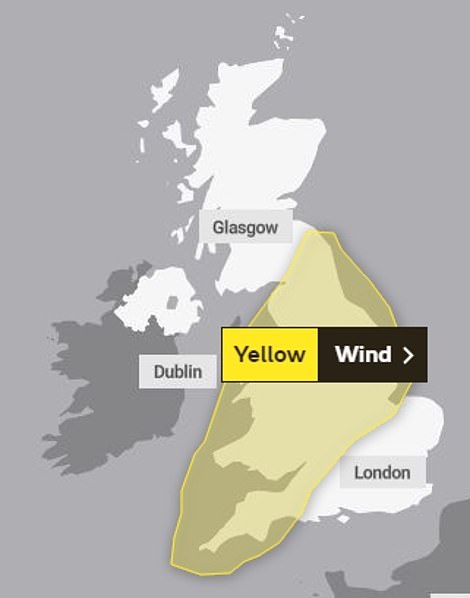 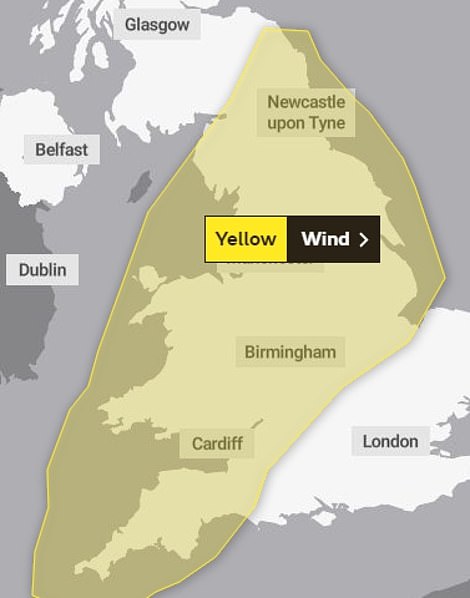 A yellow weather warning has been issued for large swathes of the country, including much of South-West England, Wales, The Midlands and North-East England and will be in effect from 3pm on Sunday to 6am on Monday