A ‘moronic’ zoo has been blasted for letting children as young as eight play a tug-of-war with lions and tigers in a £15-a-ticket ‘human v beast challenge’.

Dartmoor Zoo launched its ‘human v beast’ challenge earlier this month, which sees four people being pitted against one of its big cats in an activity that zoo keepers have said the animals find ‘enriching’.

The experience at the Plymouth-based zoo costs £15 per person and is set to help create the ‘best welfare possible’ for the animals. In an advertisement for the experience on the zoo’s Facebook page, which features a video of a zoo keeper partaking it says that ‘this type of enrichment is very important to keep the cats fit and healthy’.

It adds that it makes the cats ‘work their food and build muscle mass’. However, animal rights groups have hit back at the zoo and have said the experience has ‘no respect for the animals’, while others branded the organisers as ‘morons’. 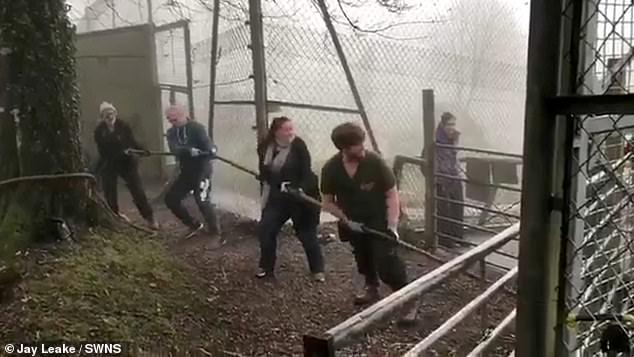 In a tweet to Datmoor Zoo, The Born Free Foundation said: ‘@.DartmoorZoo to offer ‘Human vs Beast Experience’ this February half-term. Is a tug of war game with a lion or tiger really the way to inspire respect for these animals? RT to urge the zoo to rethink this! #Don’tBuyCaptivity #KeepWildlifeinTheWild.’

This is while other activists said: ‘Is this for real? What moron thought that this was a good idea’.

During the experience competitors take on either the zoo’s male tiger Dragan or its male lion Jasirir.

Meat is attached to a rope to bait the animals and when it picks it up the participants, which are on the other side of the fence, take up the other end of rope for a tug-of-war. The tiger and lion enclosure at Dartmoor Zoo in Plymouth Senior zoo keeper Simon Moore said this sort of experience is ‘essential’ for the animals.

He said: ‘In captivity, its essential for us to try to mimic the behaviours to create the best welfare possible.

‘We do a lot of enrichment for the cats and this is just one type’.

This is while the zoo’s CEO Benjamin Mee said the activity is common across other zoos and wildlife parks. Jasirir the lion (pictured above) roaming the enclosure at Dartmoor Zoo The human vs beast experience will be available between February 16, and February 24, and will cost £15 per person. Children can take part although they have to be at least eight-years-old

‘The lions like it’, he said. ‘The public like it and it’s working well. It is regarded as really good enrichment for the animals, whether the public are involved or not’.

Social media users also aired their frustration at the activity with one user saying that the zoo was ‘shameful’.

‘Shameful. How about baiting some of your bears whilst you’re at it? You are supposed to be conserving the future of these animals – a position of responsibility – not exploiting and abusing them for profit! Disgraceful.’

One Twitter user @paulwrites said: ‘Are they living in medieval times? Whoever thought of this and backed it should think very carefully about demonising animals as commodities for profit.’ A zoo keeper is followed by a tiger at Dartmoor Zoo. Tigers are also taking part in the new attraction which has sparked controversy This is while Jo Hollis said: ‘Dartmoor zoo should be ashamed of themselves. Please explain how this is conservation allowing people near WILD ANIMALS. It’s not! It’s a money grabbing scheme at the animals expense.’

In a statement Mr Moore also added that the rope-pulling exercise creates a brief period of heightened exercise for the cats involved.

‘This simulates the natural hunting and feeding behaviour of both species, where any feeds would be proceeded by the exertions involved in hunting down, restraining and killing a prey animal. For the lions it additionally reflects the competition between members of the pride for their share of the kill.

‘The welfare of the animals is constantly assessed by the keepers monitoring the experience. They keep a close eye on physical effects of the exercise to ensure that animals are not over-exerting themselves or otherwise at risk of physical damage. The activity had to be approved by the Ethics Committee at the Zoo. ‘In addition, the activity is fully risk assessed, with the human participants receiving a Health and Safety briefing prior to the event. The keeper assigned to supervise the human part of the experience will also be working to ensure that the rope-pull itself is undertaken in a safe manner for the humans and animals involved.’

Since the launch of the experience a petition has been set up to get the event banned.

The petition says: ‘Dartmoor Zoo are selling tickets for £15 each to have a tug-of-war with a captive lion or a tiger.

‘It’s cruel and shows a total lack of respect for these beautiful majestic wild animals. The animals are baited with meat before they grip on to their food, beginning the game 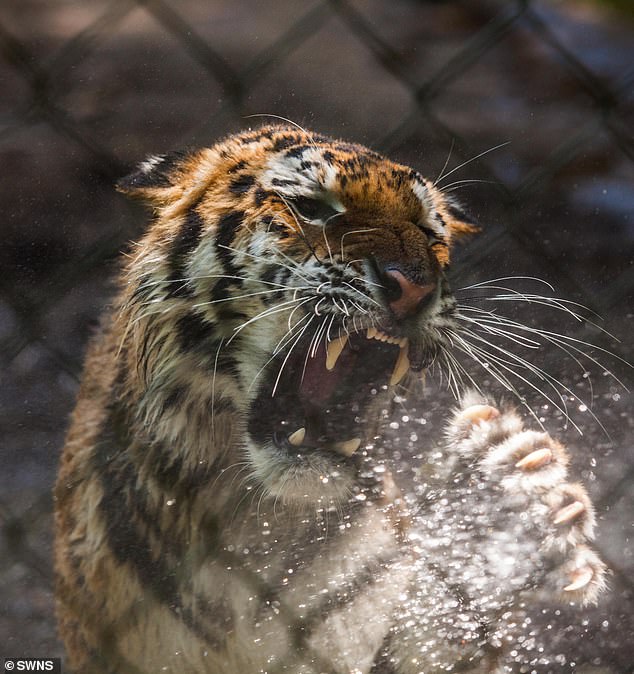 A file photo of one of the tigers at Dartmoor Zoo, which launched the new attraction earlier this month

‘It feels like we’re going backwards, the zoo is acting more like a circus rather than somewhere that really cares about the health and safety of the endangered animals in their captivity.

‘The zoo claims it’s to give the animals intellectual exercise and fun, but it comes across as putting profits before the animal’s welfare.

‘There are plenty of ways that experienced professionals can care for the rare animals, without turning them into a novelty plaything for tourists.’

The petition adds the attraction comes across as the zoo ‘putting profits before the animals’ welfare’.

Despite the petition, Zoo owner Mr Mee said the experience will carry on, adding it would be ‘bitterly ironic if animal rights campaigners stop animals getting enrichment in zoos’.

He continued: ‘I will not be persuaded not to do the activity unless someone provides me with evidence against it, and I would be amazed at that.

‘I understand some of the criticism is around it being a form of public entertainment, and we are being paid to entertain crowds, but it is engagement at its purest form.

‘People get a real appreciation of the power of the animal, which you just can’t get from a documentary.

‘Yes we make money from it, but we are a charity and the lion house is 30 years old and needs upgrading.

‘We are coming out of the winter season into the summer circus now to start paying for renovations, and this is going to help.’